"If This is Your Idea of Christmas..."

EAST BRUNSWICK, N.J. - Hope everyone had a lovely Christmas day; the weather was certainly lovely by itself, pleasantly sunny and not too cold...

And I actually had a day off from Wall Street Journal today, because the Asia and Europe papers don't publish tomorrow on account of many non-U.S. nations celebrating Boxing Day. I wonder if it's the only holiday of the year where I actually have a day off on the actual day instead of on the day before...

Anyway, here's my way of commemorating Dec. 25 this year on my blog. 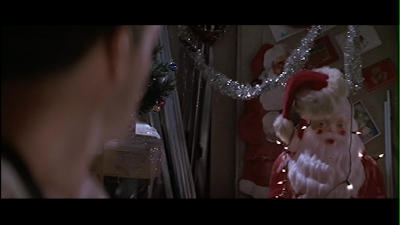 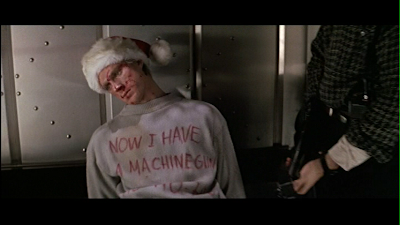 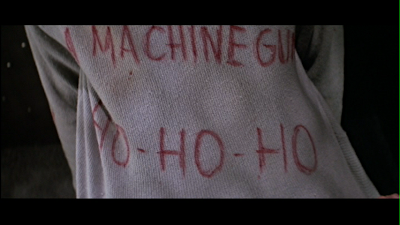 Auteurism Gone Mad: A Brief Riposte to Critics of No Country for Old Men 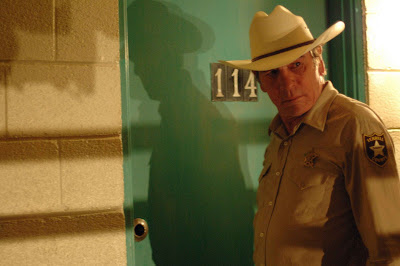 EAST BRUNSWICK, N.J. - For this particular entry on this dull Saturday night, I figured I'd take some time to do something I've rarely done on this blog of mine: take an entire post to respond to criticisms against a movie.

The movie in question is the apparent movie of the moment: the Coen Brothers' No Country for Old Men, which now seems to be figuring in heavily in critics organizations' year-end tabulations. The principal inspiration for this post is a one-paragraph dismissal of the film offered by a critic I admire (see it here). I think the sentence that really did it for me---in fact, damn near infuriated me, and that usually doesn't happen with me when it comes to considering dissenting views of a movie I admire---was this one:

But the Coens’ weltanschauung is as small and pinched as ever: this is a film that invites you to laugh at the choice of linoleum floor tile in a sheriff’s station even as the sheriff is being strangled on top of it.

A linoleum floor as an example of the Coens' supposed snickering ways popping up again? Seriously?? Okay, I'll concede that I don't really know what linoleum tiles generally looked like in police stations in the '50s and '60s, so maybe I don't have the same perspective as this critic, in his older age and wisdom, possesses regarding that piece of art direction. But really, if that is the length a scornful critic of the Coens has to go in order to support the contention that No Country for Old Men is merely one more festival of condescension, snark and precious grotesquerie, it seems to me that that says more about one person's rigid auteurist reflexes than about the movie itself---akin to auteurism gone mad.

That's just one man's opinion, yes, but he speaks pretty much for just about every No Country naysayer, all of whom seem to come up with variations on the same old complaints against the Coens' body of work: even with Tommy Lee Jones affectingly expressing weariness about the moral decay of the society he's a part of, these two jokers---who, among other offenses, as this line of thinking goes, made a heartless mockery of Minnesotans, their accents and their naive worldviews while pretending to be serious and all in Fargo---can't possibly mean what they express this time. It's not possible that these supposedly smug postmodernists, who love to feel superior to their characters at all times, can actually evince something close to sympathy, can they? Get real!

At this point, an admission is in order: I haven't always been big fans of the films of the Coens, for many of the same reasons some critics are taking the piss out of the rapturous reception toward their new work. My first viewing of Miller's Crossing---in a film class in which the Coens were a subject of study for a third of a semester---alienated the hell out of me because it seemed as detached, affectless and in love with its own stylistic cleverness as Tom Regan himself---a lovely-looking gangster pastiche, nothing more, and certainly not with anything in it worth sympathizing with or caring about. Same with Fargo, with the added bonus that we got to laugh at most Minnesotans---with the exception of the film's very pregnant conscience, of course---and their mile-wide accents. And what about the Coens' wiseass depictions of Clifford Odets and William Faulkner in Barton Fink? (Yeah, how stupid of Fink to have any ambition of trying to address the common man in his plays---whether or not he actually has the common-man perspective to do so successfully.)

But then I saw O Brother, Where Art Thou?, and somehow it seemed to contain more warmth and generosity of spirit than I remember even in relatively light Coen fare like The Big Lebowski. The real revelation, however, came with The Man Who Wasn't There; its depiction of the main character's existential malaise was the first time I actually felt something I might go so far as to describe as soulful in a Coen Brothers movie, and its technique---particularly Roger Deakins's beautifully evocative black-and-white cinematography---seemed in harmony with its attempt to explore the character's exhaustion. Its depth of feeling really floored me, and that experience probably led to my complete turnaround on Miller's Crossing, which I now think is their earliest dramatic masterpiece. Now I watch it and can't help but feel a twinge of genuine sadness for the eternally guarded Tom Regan, whose one act of human kindness midway through the film ends up going for naught in the end, to the point that he tragically closes up again.

Either the Coens have actually matured in their recent work (with Intolerable Cruelty and The Ladykillers as aberrations), or I've just gotten used to them.

My point in recounting my, uh, case history with Coen films is to suggest that I sympathize, in some ways, with the opposition viewpoint toward the Coens regarding No Country for Old Men. To an extent, I think they have been guilty of a considerable amount of snarkiness and condescension in the past, guilty of letting technical precision and film-geek smartness override any human interest (Stanley Kubrick may have been an extraordinarily precise technical filmmaker, but even at his bleakest he seemed to evince a measure of inquisitiveness about humanity, even at its most reprehensible). But I also think the Coens are capable of transcending those perceived flaws, breaking through into something resembling heart, or at least a palpable investment in their characters rather than merely showing off how superior they are to them. What ultimately frustrates me about some of the criticisms lodged against their new film is that it seems as if its harshest critics went into the movie expecting to dislike it from the start simply because it looked like another Fargo or Blood Simple, and then couldn't but interpret the whole movie from this prejudiced viewpoint---thus comments like the aforementioned linoleum-floor interpretation explicated above. That strikes me as both unfair, close-minded (and here I'm thinking critics are supposed to be more open-minded than most moviegoers!) and a little lazy, frankly.

That's pretty much all that I wanted to express on that matter. As for the film itself...well, for what it's worth: no, it's not my favorite film of the year (although I suspect, when the year is out, it'll probably make my top 5), but it's the most exhilarating piece of pure cinema I've encountered all year. Don't take that to mean, however, that it's merely a soulless technical exercise---even if, as an exercise, it's brilliantly made and totally gripping. Its technical facility is put wholly in the service of its cynical, metaphysical vision of a universe that has become perhaps too comfortable with violence in its midst. It's not soulless; it's about soullesness---crucial difference. If anything, in its mournful evocation of profound powerlessness in the face of evil and moral disintegration in our modern age, it's perhaps a more valuable indicator of the current national mood than most of the recent dramas (like Paul Haggis's typically reductive In the Valley of Elah) that have taken on the post-9/11 national mood more directly.

Oh yeah, and for my money, I think it's more convincing in its despair than Cormac McCarthy's novel is (even if there is admittedly more of Tommy Lee Jones's thematically central Sheriff Bell character in the book than there is in the movie).

Happy (Belated) 22nd Birthday to Me!

A couple of days ago, on December 4, I celebrated my 22nd birthday. Yes, the big 2-2. No, it's not really as awesome as I made that sound (no celebratory trips to the bar for me this year). Basically, it was just another day in the life of yours truly, except with cake...and an MC Hammer doll for a gift???

Yes, I'm going to have to explain this one...

Among my many duties at the Wall Street Journal's monitor desk, I'm in charge of compiling the people and business indexes---the list of businessmen and companies that get significant mention in that day's edition---for the international papers (or at least Asia if I'm working my usual 5.5-hr. shift). Every time I feel like I'm ready to start working on the indexes, I email the lead paginator and a couple of news editors to indicate thus. But, with these emails, we have an inside joke; one of them is apparently a fan of that old rapper MC Hammer, and thus with each email, I slap on the subject line "Hammertime!" and attach to the body of the email a picture of the guy. Usually it's a picture that I randomly select from a Google image search. And yet, these people who receive my Hammertime notices seem so tickled by the pictures I choose that, when they found out that my birthday was this past Tuesday, they decided to, I guess, reward me for delighting them with my MC Hammer pics by presenting me with the birthday gift of...you guessed it, MC Hammer! Specifically, an MC Hammer doll from 1991 that one of them got off of eBay.

I couldn't help but laugh when I saw that this was the gift they gave me for my 22nd birthday. But it was a laughter borne out of fondness, not derision. At least I'm having some fun at that job...

Later, of course, my mother got me a cake from Pathmark and put four candles on it (2+2, get it?). What did I wish for before blowing out those candles? Generally speaking, a bright future in which I achieved all that I set out to one day achieve: a writing career (or something close to a career that involves writing), a place in or near New York City, good health, minimal amounts of stress. Things like that.