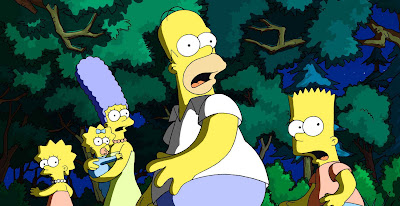 EAST BRUNSWICK, N.J. - Though I still watch The Simpsons fairly regularly, at this point I'm mostly doing it out of loyalty. Let's face it, as subversive as the show was when it hit the airwaves in 1990, The Simpsons has become an institution itself, and while the show occasionally has its moments of comic gold (its recent parody of 24 boasted a few witty visual gags in spoofing various facets of its parody-ready target, right down to its split-screens and its familiar narrative twists), mostly it just seems like a bland, if sincere, imitation of its former masterful self---not unfunny, but nowhere near as satirically sharp, emotionally touching or as out-and-out memorable as it used to be in its best years (pretty much anything before Seasons 9 or 10, I'd say). More often than not, The Simpsons seem more like they're coasting on the good will of those amazing early seasons---and I guess I still watch (and intermittently enjoy) because of that same good will. The achievement of the show and its place in television history is hard to deny, but watch some of the newer episodes and, despite the amusement one might find in them, one might have a difficult time figuring out what exactly made it so great over a decade ago.

On the other hand, maybe it's too much to expect a groundbreaking series that has been on the air for 18 seasons to be as fresh or as sharp as it was as a younger show, especially when its influence---its pop-culture takeoffs, its attacks on comfortable bourgeois notions of family life and of American society in general---has been absorbed so completely into the mainstream and into newer shows like Family Guy and South Park. (These days, I'll readily admit that I'd rather watch a rude, crude but thought-provoking South Park episode than another, relatively tamer Simpsons episode.)

So perhaps one shouldn't go into The Simpsons Movie (**½ out of ****) with expectations that it'll somehow singlehandedly restore the series to its former brilliance, and instead enjoy it for what it is: a fun, amusing, occasionally touching CinemaScope transplantation of the TV series. It doesn't exactly push the boundaries of the show for the big screen in the same way the South Park movie did---it's mostly content to be another summer movie adventure, albeit one with a distinctly satirical Simpsons edge to it---but it's good enough to not only entertain non-fans, but also remind devotees what they loved about the show in the first place. At the very least, it's probably the freshest The Simpsons has felt in a long time.

Its best section is probably its first third, which, as is typical of many of the more recent episodes, proceeds mostly as a loosely connected collection of rapid-fire sight gags and topical jokes and one-liners. Opening with an Itchy & Scratchy cartoon (great) in 1.85:1, the screen expands to 2.35:1 right after Homer castigates us in the audience for being stupid enough to spend money on something we could get for free. Green Day makes an appearance early on in the film, performing a hard-rock version of Danny Elfman's immortal Simpsons theme song; when Billie Joe Armstrong is about to start talking about an environmental issue, the Springfieldians pelt the band with tomatoes (one of them yells "preaching!"); the pollution in the lake on which they're performing causes their platform to break apart and sink, taking the band members along with them (all while they're playing one last song, Titanic-style)---their funeral leads to a performance on the organ of "American Idiot: Funeral Version." Oh, and what about the bottom-of-the-screen news crawl that pops up at a random moment? And the various (if rather typical for this show) digs at organized religion? Such topical comic grace notes are something The Simpsons have always excelled, and the writers---all 11 of them, including show creator Matt Groening himself---throw so much of them at you in the film's first half-hour that the effect is exhilarating in the same way as one's first viewing of Airplane!: even if one gag drops with a thud, another one comes along to crack you up. Gag overload.

The rat-a-tat comic pace starts to slow down a bit once the plot proper kicks in. After an environmental accident---of, of course Homer's doing---leads the power-hungry head of the Environmental Protection Agency (voiced by Albert Brooks, who has lent his voice to the series on a number of memorable occasions) to conclude that Springfield is too much of an environmental hazard, the EPA puts a literal glass dome around the town and seals it off from the rest of the world And once Springfield finds out Homer's role in all of this---involving a pig, and that's all I'll say---the family finds themselves forced to relocate to Alaska, of all places, to escape an angry mob that has developed to take the Simpsons down. Once there, Homer and Marge once again find their marriage tested, leading Homer to a soul-searching session reminiscent of his hallucinations in the eighth-season episode "El Viaje Misterioso de Nuestro Homer" (without the instigating chili, of course). The second and third acts of The Simpsons Movie still contain laughs aplenty, but it's fairly conventional blockbuster stuff by this show's standards, and even though I was entertained all the way through, I felt a little disappointed by the end that this long-awaited jump to the screen didn't take more chances with its satirical targets, didn't quite make the leap into true subversive inspiration. (Who knows? Maybe they could have turned this big-screen adventure into an assault on big-screen adventures a la Team America: World Police...) By the end, the usual---dare I say, almost sitcom-cliched?---family lessons about togetherness have been learned, and everything is happy ever after---at least, until the next episode, anyway.

Eh, but I suppose a fan shouldn't carp too much about a movie that still manages to wring as many laughs as this, and one that evinces a genuine heart, too. The emotions that support the laughter in this movie may remind fans of how well The Simpsons used to be able to balance touching character drama with satire. And heck, as a fan, I've lived so long with these characters that, even if the movie slightly disappoints---and by slightly, I mean veeeery slightly---I can't feel to cynical about seeing them in glorious widescreen (the TV episodes are still broadcast in 1.33:1).