EAST BRUNSWICK, N.J. - These past few days have been so uneventful---at least, uneventful compared to the rest of the summer---that I'm almost glad next week I'm going to be working at Dow Jones again. I've been keeping myself occupied in small ways, though, so it's not like I'm dying of boredom or anything.

Anyway, how about a movie still for the day? 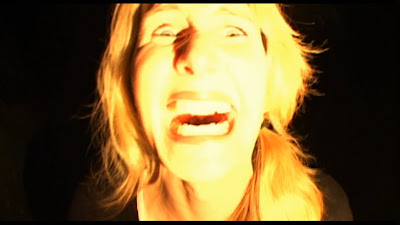 I recently acquired a copy of David Lynch's latest mindbender Inland Empire on DVD, and I imagine that my second viewing of it a few days ago will not be the last. There is just so much to parse from this film on a thematic level! Is it merely a three-hour epic about an actress who redefines the idea of getting ugly for her art (the only interesting thematic and narrative angle I played up when I originally reviewed the film on this blog here)? Or does it daringly equate thesping with whoring? I sense a self-reflexive meta-movie context in this film, but I'm still not entirely sure how it fits in with the rest of the film. And here's an idea that came up during my most recent viewing: is this really Nikki Grace's or Susan Blue's story at all? Could much of this be a projection of the nameless Polish girl's---her envisioning a Hollywood movie equivalent of her own personal troubles? And what the hell is up with the rabbits??? I'm seriously considering taking notes the next time I watch it straight through (although when that will happen is anyone's guess---oh life).

Until then, though, I think the above image will suffice as a nightmarish representation of that getting-ugly-for-her-art theme. It's a random moment a little less than two hours into the film: a painting of a clown dissolves into a shot of Laura Dern, in some indistinct environment, tiptoeing towards the camera as it pans left. Suddenly, the film speeds up a few frames and we're suddenly treated to the above image, with light blaring into Dern's face, and complete with screeching sounds on the soundtrack. Cut to next shot, which is of Dern reacting as if she had just seen herself. I reacted exactly the same way. The moment doesn't make a lick of sense on a narrative level, but on an emotional level---and it's amazing how compassionate Inland Empire, at heart, really is---it makes all the intuitive, subconscious sense in the world. That's pretty much the way the whole movie works, I think.
Posted by Kenji Fujishima at 8/22/2007 12:31:00 AM

Obviously, Lynch's [quintessential] films have always worked on an intuitive level, but I think this film takes it to a whole different level by extracting the frames {funny how your blog name is already being outdated? ;)} and developing a heightened sense of insistent infiltration. His mise en scène is incredible here, huh?

...funny how your blog name is already being outdated? ;)...

Haha I suppose it became outdated when I started putting in more screen grabs like the one from Inland Empire onto my blog, lol.

Quite, and it's all given a different dimension than before through the digital-videography, which at times makes some the crazy shit that goes on in the movie look almost too real (like a cheap home video)---and yet at the same time seem appropriately dreamlike. If anything, Inland Empire on DVD---as Slant's Ed Gonzalez suggested when he reviewed the DVD online---looks even better than it did on a big screen, where the low-fi quality of the images captured by the PD-150 camera was sometimes painfully (although intriguingly) obvious.