EAST BRUNSWICK, N.J. - "Change" is a word that seems to be bandied about by the two Democratic presidential candidates during this current election campaign like an increasingly meaningless buzzword, another in a long line of appealing-sounding promises---like George H.W. Bush's infamous "Read my lips: no new taxes" pledge during his election campaign in 1988---that may end up blowing up in their faces once cold, hard reality sets in.

Want to see real change, though? You can see it---or at least get a sense of it---at The Wall Street Journal. 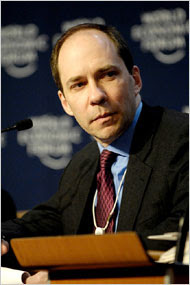 As many of you may have heard, Marcus Brauchli resigned from his position as managing editor after less than a year on the job. Being that I'm a lowly monitor-desk employee with little interaction with the bigwigs up in the World Financial Center in New York, I didn't really know Mr. Brauchli all that well---but by all accounts he was a very likable and well-respected man with a laudable backlog of experience both here and abroad. But according to what I have read from news reports, Mr. Brauchli had become frustrated with the direction his superior, News Corp. mogul Rupert Murdoch, was taking the paper, as well as with the feeling that he was not being allowed the control he had been promised. Thus, according to Mr. Brauchli in a letter he sent around to employees on Tuesday, he said that it was time for him to step aside and, I guess one would assume, let Mr. Murdoch pick a managing director of his own choosing to go forward with his vision for the Journal.

If one didn't realize that real change was coming to this prestigious newspaper, Mr. Brauchli's resignation, I think, pretty much jolted one out of blissful ignorance.

Not that I've been ignorant or blissful about any of this. In fact, I'm already starting to sense the winds of change at the monitor desk. Sure, there was that meeting a couple of weeks ago in which my supervisors tried to convince us that there was nothing to worry about, that even though no one had any idea what Mr. Murdoch had in mind for the paper, everything possible was being done to try to make a smooth transition for all of us. But last week, one of our employees left the monitor desk after working here for only about three or four months and took up a News Assistant position up in the paper's New York headquarters. And after this week, chalk up another monitor-desk employee headed for the supposedly greener pastures of the World Financial Center. The ranks of the monitor desk are gradually thinning out as I write this: I think another one is leaving in a matter of days to be working in a different department within the South Brunswick office.

All of this can't help but remind me of a portentous bit of closing dialogue at the end of "Tooms," the first-season X-Files episode (thanks to Red Wolf's X-Files Episode Guide for the transcript):

Mulder: "It's amazing how things change isn't it?" [staring at chrysalis]
Scully: "The caterpillar?"
Mulder: "No, a change for us. It's coming."
Scully: "How do you know?"
Mulder: "A hunch."

The only difference between the open-endedness of that bit of dialogue and my all-too-real situation is that, in my case, it feels like more than a hunch. A couple days ago, I got an email from someone I know who works in New York; she opened her message with something along the lines of "I'm sorry to hear about what's going on with the monitor desk." What's going on? Are we on the verge of extinction? More importantly, am I on the verge of losing a job? (This week, apparently she's going to come in to the South Brunswick to "pick my brain," so to speak, about what I do during the day on the monitor desk.)

Amazingly, I'm not feeling all that panicky about any of this. Maybe it's just that I'm worrying about other (arguably less important) things at this time...but right now, I'm seeing and sensing change swirling around me and, instead of hyperventilating over what may or may not be next, I'm kinda taking everything in stride. Heck, I'm almost finding all of this rather exciting---I'm a part of an organization in transition, and I'm fascinated to see how it all turns out. The drama! The twists! 24 ain't got nothing on this! (Okay, now you're exaggerating...)

Actually, the work of art I'm most thinking about these days, as I continue to do my job while noticing and reflecting on these current changes and possible future shifts, is Li Tien-lu, the Taiwanese puppetmaster from Hou Hsiao-hsien's 1993 epic of the same name. (Aside: no, I'm not throwing out a Hou Hsiao-hsien title just to be smug and elitist, as Armond White would have you believe in this breathtakingly hypocritical, if perversely compelling, screed published two days ago in the New York Press.) Li, as he describes and justifies the way he worked for both the Taiwanese and the Japanese during World War II, is someone who gets swept up and carried along by great historical and political forces, who doesn't so much actively participate in trying to master these forces as try to adapt within them in order to persevere with his own art. In some ways, I see myself like that---politics has never particularly interested me either; I just want to continue doing what I'm doing, any way I can. And if continuing what I'm doing---that is, trying to earn money while keeping up with my interests on the side---means having to perhaps relocate or travel farther than usual...well, so be it, I guess. Maybe real adulthood---trying to make it on my own, that is---is around the corner sooner than I expected.

A part of me feels nervous about some of this---who wouldn't be, with so much up in the air?---but a part of me embraces all of this, or at least tries to force myself to do so. A change for me is coming. Not sure what it is, but for once, I feel more interested than anxious to find out.

Of course, maybe it's just that I've become too comfortable (read: sheltered) here at home. If I was living on my own and had a job conceivably hanging in the balance like mine quite possibly is, maybe I would be feeling much different, and less optimistic, right now. That said, enough with negativity; I've already had my fill of it in the endless Clinton vs. Obama political death match.

In the meantime, however, maybe a bit of reflection on my future is in order---especially now that it looks like print film criticism isn't the most profitable way to go. (On the other hand, was it ever "profitable" in the sense of earning reasonable sums of money? Probably not.) Perhaps such reflections will fill up a future entry; for now, though, I think I'll just stick to the present, and take things as they come---although maybe a visit to a site like JournalismJobs.com may be in order as well.

Yes, you should take things as they come and certainly not make any rash moves. After all, you did not mention anyone being laid off--just transferred and maybe moved to better jobs. When a big organization re-organizes, it can be a good thing for some employees and for others it can be a bad thing. You will just have to wait and see what change will mean to you. It is true that since you do not have to worry about being out on the street, you can be a bit more relaxed at this point. As for the future, you might want to look into graduate programs that interest you and will refine your skills and make you more marketable in the future. You have the chance now to be doing that along with working. If they do move you, I would suggest going with the flow. The organization you work for has a great brand name and sticking it out is a good thing--at the very least, it will always be good on the resume. Another point to consider is that the economy sucks right now, to put it bluntly, and it will be a year, at least, before it gets better. A job is a job and yours is better than most people have. A journalism major, a new graduate, working for the top name in the business!! Don't take that for granted. Its impressive.
By the way, I like how you are able to make the comparison between your real world and the world as portrayed in the movies. That is a what I would call a good writing technique and a good thought process!

Thanks for that! And I was afraid that constantly referring to movies in talking about real life was a sign of someone who took movies more seriously than real life...