One Worth Watching, One Not: Watchmen, Duplicity, and a Brief Life Update

EAST BRUNSWICK, N.J. - Aside from seeing my first byline on wsj.com last week, the biggest change in my life in the past couple of weeks has been a change in work hours. I'm working slightly later hours at The Wall Street Journal now, roughly 11:30 a.m. to 7:30 p.m. compared to the 8:30 a.m.-4:30 p.m. shift I was working previously. One of my superiors approached me a couple of weeks ago about the shift change, saying that one of the news pods needed some extra help with its news assistant moving to a different floor—and so, trouper that I am, I said, sure, no problem, if you need the help, I will gladly help.

What the shift change does, however, is pretty much take away the one personal perk I found in my more-or-less 9-to-5 schedule: If ever I was so inclined, after work one day I could walk to an MTA subway station, hop onto an A, C or E train and, a few stops or so later, be at one of New York's fine art-house theaters, be it Film Forum, IFC Center, Angelika Film Center, or even the really edgy Anthology Film Archives. Basically, I could catch a movie that may never find its way to my neck of the (New Jersey) woods, and be home at a relatively reasonable time at night—and I wouldn't always have to make a special trek on a Saturday for it.

That convenience is pretty much gone now, barring any further changes down the road. And frankly, as much of a cinephile as I may be, I guess I just am not enough of an obsessive one to make a habit of commuting for about 1¼ hours or so each way just to check out a flick in New York every week.

So you may not be seeing a whole lot of writing from me about the more obscure current releases for a while—not, at least, until I finally do decide to make the break from living at home and finding a place of my own closer to New York, if not in it. (There is hope on that front, actually, but that hope probably won't have a chance of becoming a reality until the middle of the year, I would say—still a few months away.)

Yes, I'm cutting back on my moviegoing habits somewhat. I blame the difficult economic times we're living in. Isn't everybody?

★★★★
So I might as well play some brief catch-up on some of the recent mainstream stuff...though I wish I had something exciting to report on that front.

Regarding Zack Snyder's much-hyped Watchmen adaptation: I was about to say that it was a disappointment...but considering the director at the helm, was anyone really expecting something with the deeply personal, feverish passion of Alan Moore and Dave Gibbons' celebrated 1986 graphic novel? Forget the ads proclaiming Snyder as a "visionary director"; vision is more or less what the movie lacks—or, more precisely, a vision that could be said to be the director's own, rather than merely a lifelessly faithful rendering of the notes behind Moore/Gibbons' own excoriating deconstruction of heroism and heroic images. Snyder's only real contributions are a few interesting music cues (Bob Dylan's "The Times They Are A-Changin'" to illustrate the alternate version of history that highlights its admittedly inventive opening credits; ironic uses of "The Sounds of Silence," Jimi Hendrix's "All Along the Watchtower," and Wagner's "Ride of the Valkyries"; and, most hilariously, Leonard Cohen's "Hallelujah" during a sex scene that looks right out of softcore porn) and some exaggerated instances of ultraviolence that, for me, pretty much give the game away. Snyder, like most skilled Hollywood hacks, is more interested in "kewl" action and gory violence than in exploring the moral shadows that lie behind it. And what better way to emphasize all that coolness than with his lame slo-mo-then-fast-mo visual signature dragging out the action scenes?

I suppose enough of the book's emotional and moral complexity comes through that that some of its ideas might resonate, however punily, with both Watchmen newbies and fanatics. Rorshach's black-and-white worldview remains pungent—mostly thanks to a fantastically intense Jackie Earle Haley—as does Dr. Manhattan's icy aloofness and the Comedian's world-weariness. The graphic novel was nothing if not a gripping dialogue between wildly divergent points of view regarding a hero's place in a broken society, and some of that dialogue does make itself felt here and there. But Watchmen was hardly a mere philosophical thesis paper in comic-book form; Moore managed to create vivid characterizations to prop up his intellectual musings. Moore gave his superheroes flesh and blood; the movie basically reverts them back to lofty superheroes again, completely missing the cynical ironies Moore built into his story. Snyder seems to regard his superheroes with awe where Moore saw some rather disturbing and scary things in them.

Putting aside further movie-and-book comparisons, however, the fact remains that much of the movie felt rather rushed and, frankly, dull to me. It was a relief to turn back to the gorgeous hand-drawn panels in my copy of the book; there's infinitely more heat to those drawings than there is in most frames of Snyder's overly reverent film adaptation. His reverence flattens it out. Stick with the book—giant squid and all (and no, fans, I don't think the film's altered ending is necessarily an improvement on the book's).

★★★★
There is, believe it or not, more fun to be had at Tony Gilroy's Duplicity—or basically Michael Clayton, Gilroy's previous film, reimagined as a modern-day Tracy/Hepburn-style romantic/comic romp. Sure, its view of big business as ruthlessly competitive cutthroats is glib and certainly old-hat (whereas Gilroy put across a similar outlook in Michael Clayton more convincingly). But you know what? Call me a Coen-esque wiseass if you must, but Lord knows we might as well try to squeeze a good laugh at this kind of stuff, what with the sheer scale of the kind of fraud perpetrated by the likes of Bernard Madoff causing people like myself to chuckle with angry disbelief as more details came out. Does corporate greed have any limits?

Actually, there is a deeper emotional drama of sorts to be found amidst the jazzy cuteness of James Newton Howard's occasionally oppressive score and Gilroy's clumsy and gratuitous use of splitscreen effects (hey, are you having fun yet?). It turns out that the two main characters, played by Hollywood superstars Julia Roberts and Clive Owen, are almost as screwed up as any of the Watchmen folk. Having played spy games for so long, Julia Roberts's Claire has become so immured from romantic feeling that, when love does hit her, she finds herself incapable of giving herself over to those feelings; instead, she keeps her emotional guard up, always trying to make sure she's not being conned—and Clive Owen's Ray find himself increasingly exasperated by her tests of faith, mostly because he's struggling to grow out of that kind of lifestyle. The dictates of Hollywood genre might suggest that their relationship grows out of a deep well of unspoken passion or something like that...but the central relationship of Duplicity is, if anything, more out of necessity than passion—the need for something honest and true.

If you look at the two characters that way, then, I think it makes a certain kind of sense that Roberts and Owen don't exactly burn up the screen with chemistry: burning passion is not what leads them back to each other. Really, they are the only ones who may truly understand each other in this crazy, twisted world of cutthroat corporate competition. And I can't say I agree with all those reviews that suggest that Gilroy somehow overdoes the narrative twists and turns. I say it's not about the plot: it's all about the feelings of disorientation and distrust that all those twists, thrown together, produce in the viewer. The plot is, in other words, an abstraction.

Duplicity is hardly a masterpiece, but it has some interesting undercurrents coursing through it, and Gilroy maintains an admirable focus on his two main characters even as he tries to distract us with his narrative tricks.

It's not bad at all; in fact, I found myself enjoying it more as it went along. Nevertheless, it just made me yearn for the art-house more.

★★★★
P.S. Maybe this relatively minor lifestyle change will finally give me an opportunity to share more of what I'm watching through my Netflix subscription these days. If I do go down that route in my next entry, perhaps it will concern this: 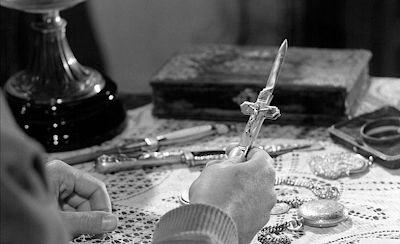 I understand where your analysis of Watchmen is coming from, but I love how the movie copies the graphic novel if for no other reason than because the book is so good. I also think the ending was altered for the better considering the time passed and different medium. The slow to fast motion technique isn't a bad signature for a so-called "action director", if you think about it. But its mainly the characters, music, and the themes that carry over from Moore that make it one of my favorites of the past several years.

There is one sequence in Snyder's adaptation, I will grant, that actually has stuck with me in a good way: the chronicle of how Dr. Manhattan became Dr. Manhattan, which is genuinely haunting—maybe in part because of the Philip Glass Koyaanisqatsi music he utilizes on the soundtrack—in ways that much of the rest of the film simply isn't.