BROOKLYN, N.Y.—This year's New York Asian Film Festival came to an end last Thursday...though for me, it ended even earlier than that, on Saturday, July 10, because I ended up not being able to see any more films beyond that date. (Blame Anton Bruckner, John Adams, Franz Welser-Möst and the Cleveland Orchestra, I guess.)

The amount of films I saw this year was paltry compared to the intake of some of the folks I saw regularly at the 12 screenings I attended; I think three films in one day was the most I managed. Still, I saw a pretty strong selection of films: nothing outright awful and even a handful of truly outstanding films, old and new. 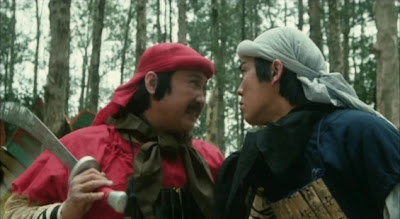 Among the great ones I saw this year was a classic of Hong Kong cinema: Tsui Hark's 1983 martial-arts/special effects extravaganza Zu: Warriors from the Magic Mountain, an epic of seemingly inexhaustible visual invention that starts with action right off the bat and never looks back. To attempt an actual, in-depth review would be meaningless, really; a work of such devil-may-care imagination, visualized within an inch of its life and paced with such breathless momentum almost defies intellectual criticism.

The first 10 whirlwind minutes brilliantly set the tone of the film. Hark hastily dispatches with set-up with a dramatically delivered voiceover narration, and right off the bat we're thrust into a decades-long civil war in China between warring clans. Ti Ming Chi (Yuen Biao), a scout for two warlords, finds himself thrust in the middle of it all when, after the warlords can't decide on the best way to proceed, both of them turn against him for being unable to take a side. He jumps onto a horse and flees the scene, finding a boat near a cliff and leaping onto it—only to discover that the sailor is being held hostage by a fat man (Sammo Hung) from an opposing faction. They both fight and quickly air out generations-long grievances toward each other—but arrows fly in their direction and they soon discover a whole different tribe is attacking them. Ti and the fat man escape from the boat and into a nearby forest, where they reconcile and take about two seconds to get to know each other...and then three different-colored tribes converge on the vicinity and start to fight, leaving them to try to figure out how to get out of this situation.

Whew! I said a mouthful...but yes, all of that action—which, in a more story-driven enterprise, might have taken maybe half an hour of screen time to dramatize—takes place in the span of maybe five minutes, at most. And we haven't even gotten to all the supernatural stuff yet—that's still set-up! But that's how all of Zu: Warriors from the Magic Mountain operates: unapologetic, reckless excess, with Hark throwing in as much visual and thematic ideas as he can, without much concern for plot comprehensibility. That's not to say it's all sensation and no substance: those opening 10 minutes, for instance, offer a stinging satire of the absurdities of war, and the rest of the film features the usual wu xia journeys toward maturity, heroism and enlightenment. All of this, though, is sketched in lightly, in order to not detract from the wall-to-wall surface thrills—the characters weightlessly flying through the air, the charmingly dated special effects, the awe-inspiring production design that truly envelops you in an unfamiliar fantasy world. It's exhausting and exhilarating—an unhinged and often beautiful journey into Hark's own childhood fantasy id.


More recent samples of Chinese popular cinema came in the form of two big-budget Chinese epics that received their New York premieres at the festival, Benny Chan's Shaolin (2011) and Reign of Assassins (2010), directed by Taiwanese filmmaker Su Chao-pin with Hong Kong legend John Woo receiving a co-directing credit. Both are solid crowd-pleasers, offering the usual plate of impressively choreographed action sequences and mystical mumbo-jumbo. They both also share redemption as one of their mainthemes: In Shaolin, General Hou (Andy Lau) suffers a personal tragedy as a result of his ruthless, bloodthirsty ways, and decides his path to redemption lies with Buddha; in Reign of Assassins, for Drizzle, an assassin with a deadly way with a knife, redemption lies in a brand new face (shades of Woo's 1997 American action epic Face/Off?) and a nondescript existence in a village (Kelly Lin plays her pre-surgery, Michelle Yeoh plays her post-surgery). Anyone looking for the kind of nutty intensity and almost avant-garde inspiration of something like Zu: Warriors from the Magic Mountain will be disappointed; these films are almost classical in their visual elegance and focus on credible characterizations and coherent storytelling. 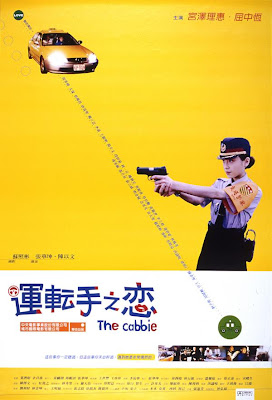 The aforementioned Su Chao-pin was the focus of a brief retrospective of his work during the festival, and while I wasn't able to see his 2002 film B.T.S. (Better Than Sex), I did see The Cabbie (2000), a comedy he wrote about a cab driver with an eccentric family and his even more eccentric attempts to woo a traffic cop (Rie Miyazawa). I sat through about half of The Cabbie thinking that I was watching tailor-made Sundance bait, its one-quirk-per-character preciousness bringing back not terribly fond memories of something like Little Miss Sunshine (2006); an English-language version of this film would, I bet, be a huge breakout hit. But the film offers some fascinating insights into the life of a cab driver—a passage in which the main character explains his way of determining what kind of passenger he's dealing with in each ride is especially funny and intriguing. And about halfway through, when the female traffic cop appears on the scene, the film finally latches onto a more interesting plot thread, about the titular cab driver's essential inability to relate the world outside the confines of his taxi in any "normal" way. Though his neuroses and naivete are generally played for lighthearted laughs, the film, in its last five minutes, takes a sudden turn toward darker waters (with an ending not unlike the last-minute shooting death that closes Jiri Menzel's Closely Watched Trains; the effect, in both cases, is akin to a filmmaker shaking its audience out of a collective complacent fog). When Su and directors Chang Hwa-kun and Chen Yi-wen decide to drop the cutesy stuff, The Cabbie becomes a briskly enjoyable human comedy with gestures toward territory more psychologically unsettling than its pleasant surface might indicate. 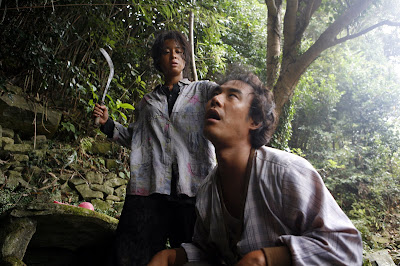 There's no hiding from the darkness of human nature, however, in Jang Cheol-su's Bedevilled (2011), which, from a plot summary, only seems like yet another revenge drama from South Korea (genre territory that was already playing out to diminished returns in Kim Jee-won's endless and nauseatingly nihilistic I Saw the Devil, released earlier this year in the U.S.). Oh, there is certainly vengeance in this film—sweet, brutal, gruesome, morally ambivalent vengeance. But the revenge Bok-Nam (Seo Yeong-Hee) eventually takes on her backwards hick clan is but one facet of a film that eventually reveals itself to be something of a parable for the dangers of passivity.

Though Bok-Nam is the most memorable character of the film by far, Bedevilled actually begins with Hae-Won (Ji Seong-Won), a childhood friend of hers. She's a city woman who has come upon some of her own professional and personal troubles, all of which come to a head in the film's opening 15 minutes, as a confluence of events eventually leads her to be fired from her bank-clerk job. The most telling thing that occurs in this opening passage, however, doesn't necessarily have anything to do with her personal problems. Right at the beginning, Hae-Won witnesses a mugging...but when the female victim runs up to her car to try to get help, she closes her window and drives on. She's later fingered as a witness and is forced to go to a police station and identify potential criminals in a lineup. When she sees the two muggers, what does she do? She lies to the police and pretends that those aren't the criminals, then demands that the police leave her alone regarding the mugging. Hae-Won embodies a familiar type: the tough-as-nails city dweller who has taken the idea of keeping to herself to an almost callous extreme. This turns out to be a necessary prologue, setting up a crucial decision she makes on Bok-Nam's behalf midway through the film that tragically paves the way her friend's violent mental collapse. If anything, though, Bedevilled is really Hae-Won's journey from self-interest to selflessness, summed up with a concluding dissolve that matches her torso with the shape of that fateful island. 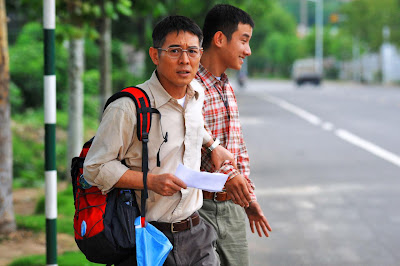 Speaking of islands, Xue Xiaolu's Ocean Heaven (2010) details a more warmhearted emotional journey, centering around one father's (Jet Li) attempts to prepare his autistic son (Wen Zhang) for life without him after he dies. It's both as sentimental as the premise sounds, and not. With its sobbing Joe Hisaishi score (less insistent in tugging at your heartstrings than his music for the Oscar-winning Japanese films Departures, but still at times a bit more than necessary), its rather cheesy alignment of the son's autism with the freedom of sea creatures (however beautifully photographed by the great Christopher Doyle), and its too-neat resolution, Xue's conception of the disease often threatens to verge on Rain Man/A Beautiful Mind triteness. That it doesn't entirely to do so is a tribute both to Xue's low-key, straightforward direction and to the excellence of Li's performance; in his first non-action role, Li brings a quiet dignity and emotional honesty that occasionally elevates the sappy material into something more deeply moving. Ocean Heaven is ultimately more bland and inoffensive than actively terrible...but its opening scene—the father's failed attempt to kill both himself and his son—suggests the far edgier film this might have been.

Thankfully, the rest of the films I saw in this year's New York Asian Film Festival offered edge aplenty, whether visual, thematic, violent or otherwise. I'm already eagerly chomping at the bit to see what delirious wonders the guys at Subway Cinema have in store for all of us next year!

In the meantime, enjoy this year's festival trailer, which I saw about 12 times and which never failed to bring me to a smile or a chuckle:

Can I ask a question about how kid friendly Zu is? As in does anyone get, for example, stabbed through the chest with a sword?

I don't recall that kind of overly violent swordplay off the top of my head, but I could just be forgetting. There are some spooky/scary portions in it, maybe not suitable for real young 'uns.

Thank you very much. Looking to explain to some younger folk what Wuxia is by showing them some - I'll take a look for myself before I screen it but just wanted to get a sense of whether Zu might be a possibility.