NEW YORK—This past week was a rather light one in artistic consumption, mostly because I spent my weekend back home in East Brunswick, N.J., hanging out with a dear hometown friend back in the area for a week from Singapore. Still, I managed to expose myself to some good stuff, all of which I've recounted below, as usual.

Films
★ Dragon Inn (1992, Raymond Lee), seen at Brooklyn Academy of Music in Brooklyn, N.Y.
I missed this at New York Asian Film Festival last month, so I'm grateful to BAM—with, I assume, the blessing of the fine folks at Subway Cinema—for programming this last week. I can't speak to any similarities or differences of this remake to King Hu's 1967 Taiwanese original, having not seen the earlier film; on its own terms, though, the later Dragon Inn—produced by Tsui Hark, and with action choreography courtesy of Duel to the Death director Ching Siu-tung—is reasonably entertaining stuff. It might have been a masterpiece if the relationship between the two romantic leads—Chow Wai-on (Tony Leung Ka-fai) and Yau Mo-yan (Brigitte Lin)—didn't feel so rote; Maggie Cheung, as Jade King, the owner of the titular inn in which much of the action takes place, has the far more interesting character and story arc, as a conniving woman who grows out of her own political apathy partly as a result of her own personal attraction to Chow. There's no doubt about the action sequences, however, all of them as deliriously inventive as the best that Hong Kong cinema has to offer.

★ Sweet Smell of Success (1957, Alexander Mackendrick), seen on Criterion Blu-ray at home in East Brunswick, N.J.
Yes, it has taken me this long to finally expose myself to the manifold glories of Alexander Mackendrick's deliciously cynical noir satire of journalistic corruption and ruthless, power-hungry social climbing. But yes, it is truly brilliant, right down to Elmer Bernstein's fantastically multilayered score, by turns brassily ironic and meltingly sincere. If you haven't seen this film yet, Rupert Murdoch...

★ Beginners (2010, Mike Mills), seen at Montgomery Cinemas in Skillman, N.J.
Oh hey, I actually caught up with a new release this weekend! (Does it really take weekends back home in New Jersey for me to actually catch up with new releases? Maybe...) This is a good one, too: a complex, idiosyncratic and painfully personal evocation of one man's messy attempts to come to terms with his father's death—a father who, after his mother died, finally came out of the closet and tried to live life again, even in the throes of terminal cancer. It's true that Christopher Plummer's scenes as the father are generally more interesting than the "present-day" (it's set in 2003) scenes with his shell-shocked son (Ewan Macgregor) and the oddball love interest he meets (Mélanie Laurent)...but even in those scenes, writer/director Mike Mills (whose previous film was Thumbsucker) is able to generate a mournful, reflective vibe that I found often moving—so much so that its occasional lapses into preciousness (dog subtitles? really?) aren't enough to damage the whole. This film is so low-key that it feels fragile to the touch! Perhaps that's appropriate, though, because Mills is dealing with some emotionally fragile subject matter—and for the most part he's willing to stare at it right in the face rather than evade it with cutesy quirk.

I really should write at length on Beginners, because there's much to parse here. For now, allow me to suggest that Beginners might actually make for an interesting double bill with Terrence Malick's The Tree of Life, at least as far as formally inventive, meditative approaches to grief is concerned. Mills's gaze may be less grand in scale than Malick's, but that doesn't mean it's no less ambitious. Maybe I'll develop this line of thinking in a later post. Maybe.

Games Gamblers Play (1974, Michael Hui), seen on Fortune Star DVD at home in East Brunswick, N.J.
Along with his brothers Samuel and Ricky, Michael Hui—especially with his commercially popular slapstic comedies for the Hong Kong film studio Golden Harvest, of which Games Gamblers Play was his first—helped shape the region's film industry into the juggernaut it became in the 1970s and '80s. Games Gamblers Play suggests why, at least in spots. This episodic, comic look at an oft-imprisoned con man (Michael) and a wannabe con artist who befriends and idolizes him (Samuel Hui) features an undercurrent of blue-collar frustration over the fact that this is the kind of criminal behavior that some working-class folk in Hong Kong are forced to engage in as a result of bureaucracy and poor working conditions. Some of the lightly subversive appeal of Games Gamblers Play comes in the way Hui slyly aligns our sympathies with these criminals, to the point that we're rooting for them to succeed, even as the authorities—or even their own character flaws—threaten to bring them down. I imagine that Hui's later films will develop these themes in a funnier, tighter and more coherent package than this one, which is a bit too uneven and slackly paced to be as great as it could have been. But it certainly isn't lacking in amusing moments—a sequence involving alligators and a TV game show is a particular highlight—and it has some great music in it courtesy of Samuel, who also scored popular success as a musician during the '70s and '80s.


Music
難得有情人 (1989, 關淑怡)
Meh. This second album from Shirley Kwan (whose first album I briefly wrote about in last week's log) has a great first side (the title track is infectious) but a far less interesting second side. Maybe I just wasn't in the right mood for it (frankly, I was in a really crappy mood for much of last week). Anyway, her voice is still spectacular...and so is she, physically speaking.

Here's the title track, by the way, which roughly translates to "Happy Are Those in Love." Love? Yeah, I could use some of that these days:

EDIT (12:53 A.M., Aug. 9, 2011): As "The Social Media Guru" reminded me in the comments section, I did see a band named Root Glen perform a live show on Saturday night at Rolf's Restaurant in Warren, N.J. The Guru, however, is a good friend of mine from my East Brunswick schooling days, and his brother is a member of the band, so I don't feel I can offer comment as even a halfway objective party. So I won't, other than to say I enjoyed their set and that you can check out the band's website here.
Oh, and this photo was taken at that show: 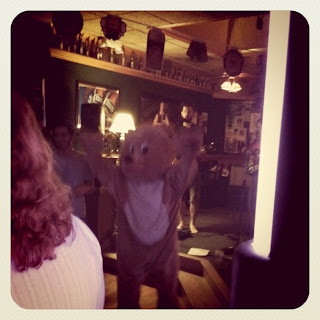 The band has an original song called "Dieting Bears." That partly explain the photo above.
Literature
★ The Temple of the Golden Pavilion (1956, Yukio Mishima)
If there was one criticism I'd make of the stage adaptation of Mishima's 1956 novel that I saw a few weeks ago at Lincoln Center (and which I wrote about here), it's that, even at its most dazzling, it couldn't help but feel like a mere approximation of the seemingly bottomless psychological depths of the source material. The Temple of the Golden Pavilion is a very interior book (it's narrated by its main character, Mizoguchi, in the first person, after all), and thus contains a lot of specific nuances that the more visual/abstract medium of theater can't always be relied on to successfully convey. So while I enjoyed that stage production, I would add that one's appreciation for it would be enhanced by a foreknowledge of Mishima's novel.

As for the novel itself, one's reaction to The Temple of the Golden Pavilion will probably depend on your reaction to Mizoguchi; he isn't a particularly likable type, and Mishima rarely stoops to softening his more curiously neurotic edges. I think he's one of the most intriguing figures I've encountered in a work of art in quite some time: a man so warped by his childhood experiences, his stutter and his loneliness that he's developed a distinctly personal way of viewing the world around him, especially when it comes to what he considers "beautiful." Sometimes the man is just plain inscrutable—but for me, that just adds to the fascination.
This, by the way, is the first Mishima novel I've read. I look forward to reading his other work—and eventually getting to his film Patriotism and then Paul Schrader's 1985 biopic of the writer.
Theater
★ The Caucasian Chalk Circle (1944, Bertolt Brecht), performed at the Lion Theater in New York
"Brechtian" is a term I've heard tossed around a lot, especially in film and theater reviews...but until last week, I had never actually exposed myself to the dramatic work of Bertolt Brecht (1898-1956), the German playwright who inspired the term. So when a friend of mine who lives in my apartment building in Brooklyn, N.Y., told me he was going to be in a production of Brecht's The Caucasian Chalk Circle, of course I was intrigued. So I saw it last week, and the experience was...interesting.

Brecht's most famous innovation essentially had to do with tearing down a theatergoer's expectations of emotional identification in a play by introducing all sorts of distancing devices—characters addressing the audience directly, songs interrupting dramatic action, and so on. His driving thesis behind what he called "epic theatre" was that by placing such barriers, an audience member would be shaken out of his complacency and thus be more open to receiving political and social ideas, and possibly be more inspired to effect change on the outside world once one left the theater.

That is not to say that Brecht's plays are merely cold and intellectual in effect. In The Caucasian Chalk Circle, at least, Brecht imbues his intellectual ambitions with a playful sense of humor that is certainly entertaining even as it highlights the kinds of class and political inequalities he wished to highlight. And for me, at least, it even somewhat worked as an emotional drama—though the parts that moved me (anything involving Grusha, the peasant who is forced to care for a baby that a high-class mother carelessly leaves behind) may not necessarily have moved others in the audience. Maybe the most bracing thing about Brecht's conception of theater is its refusal to hold the audience's collective hand; what you get out of it depends on what you personally bring to it.

I can't say this generally fine production of The Caucasian Chalk Circle necessarily brought out the inner activist in me—but I found the experience genuinely scintillating and look forward to seeing more live Brecht.
Posted by Kenji Fujishima at 8/08/2011 07:30:00 PM

You forgot about seeing Root Glen over the weekend too. I suggest a quick edit.

I read GOLDEN PAVILION a while back, but I remember loving it. I read a few Mishima books in a row...The Sound of Waves, a short story collection, Sailor Who Fell From Grace With the Sea, and maybe something else.

Hey Guru: You're right! Thus, I did a quick edit.

Cullen: Maybe the most fascinating question that popped into my mind while reading The Temple of the Golden Pavilion is extra-textual: How much of it is based on Mishima's own life and psychology? From what I've read about him, he seemed like a pretty, um, messed-up dude, to say the least!