Small Yet Giant Deliverances in Killer of Sheep

NEW BRUNSWICK, N.J. - Not much to report on my life, really---thesis-writing (almost to the promised land of completion!) and class assignments (a cinema studies seminar presentation coming up soon, a newsletter page to lay out) are keeping me busy. But I wanted to take the time to reprint an article of mine that was published yesterday in the Inside Beat---a review of Charles Burnett's rarely-seen 1977 indie classic Killer of Sheep, which is only now getting a proper theatrical release. I saw this film for the first time during Spring Break at a press screening, and folks: it's worth a trip to the city, not only because the film is such a beautiful achievement, but also because you're not likely to see a truer---or at least more authentic-seeming---or more poetic depiction of ghetto life in movies today. Makes me want to check out more of Burnett's work (I hear The Glass Shield is supposed to one of American cinema's more honest depictions of racism in society---but then, anything's probably more honest than Crash).

Anyway, I'm reposting the review because I was planning to get it published in today's edition of the Pulse---remember, that weekly entertainment section of the Home News Tribune for which I wrote a few articles last summer?---but apparently I was too late in letting the editor know about the article. So, to make up for my tardiness, I'm posting it here.

There's a lot more I would have liked to say about the movie had I been allowed more space---its editing of its various episodes struck me as particularly interesting in its own free-associative way---as well as going into more detail about a couple more scenes that intrigued me. But, because I'm such a busy man (something some friends of mine simply don't seem to understand!), I'll just post what was published in yesterday's Targum. Enjoy!

Long available only in worn-out 16mm prints and, even then, only shown on rare occasions at film festivals and museums, Charles Burnett’s 1977 low-budget independent film Killer of Sheep — beautifully restored by the UCLA Film and Television Archive — is only now, 30 years later, getting a proper theatrical release, starting a run at the IFC Center in New York and at various theaters across the country.

This is certainly a big deal, but not simply because of its rarity. It isn’t even a big deal simply because of its induction into the prestigious National Film Registry by the Library of Congress in 1990. No, the real big deal about Killer of Sheep is, most simply and eloquently, the film itself, which is one of the most grittily realistic yet strangely poetic looks at ordinary life in a small, predominantly African-American ghetto.

One can get a sense of that gritty realism right on the surface. From its deliberately unassuming — and, in this 35mm blow-up, noticeably grainy — black and white cinematography (Burnett shot the film himself) to its authentic location settings, and from the fairly amateurish performances of its mostly nonprofessional cast to its episodic plot — all of these elements serve to give us the feeling of real life taking place right in front of our eyes.

The real life of this film isn’t particularly glamorous, either: its main character, Stan (Henry Gayle Sanders), works at a slaughterhouse for a living — thus the film’s title — and goes through much of the film palpably disillusioned by the depressing reality of his lower-class existence in his Watts, Calif. community. In its interest in capturing the harsh realities of the everyday lives of ordinary citizens, Killer of Sheep works in the great tradition of neorealism, the famous post-World War II artistic movement that attempted to render real life on film as authentically as possible with documentary-style techniques — handheld camerawork, outdoor location shooting, etc.

But Italian neorealist classics like Vittorio De Sica’s Bicycle Thieves or Roberto Rossellini’s Open City aren’t great just because of its documentary-like realism. Like De Sica and Rossellini, Charles Burnett has both compassion and a poetic — yet fiercely unsentimental — sensibility to go along with his sharply observant sense of lived-in realism.

Thus, no one is made out to be exaggerated caricatures in Killer of Sheep — not even the two show-offy “rich” guys who are first seen stealing a television set, and then are shown asking Stan to participate in a murder for money. Even scenes like those, Burnett suggests, are an unmistakable part of life in an African-American ghetto; you do what you feel you have to do in order to get by in such dire surroundings.

And even in the midst of Stan’s sense of despair, Burnett is still able to find, and poetically convey, moments of indelible beauty and joy. Perhaps its most touching moment comes in long sequence in which Stan and his wife (Kaycee Moore) share a silent slow dance in their apartment to the tune of Dinah Washington’s “This Bitter Earth.” It’s all in one unbroken shot, and Burnett’s camera simply sits there, observing the wife’s attempt to try to reach out to her emotionally distant husband. When the song is over and the dance ends, everything seems to be back to (dreary) normal. Within Killer of Sheep, however, those small gestures — and there are many of them at unexpected, isolated moments — have the power of giant deliverances.

EDIT (March 31, 10:58 a.m.): I forgot that I actually had good-sized photos to go along with the published piece in Thursday's Targum! I'll post on here, just for fun. Thanks to Milestone Films for the picture. 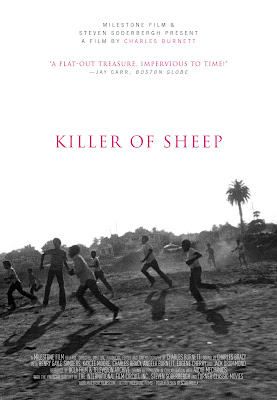