A Brief Ode to the Long Shot

I love shots that are framed to take in as much of a particular environment as possible; I especially love the kind of long shot that surrounds pitiful human or animal figures against vast natural-landscape backdrops. On a big screen, such shots can be overwhelming for the eye and the mind to take in. Where to look, what to see, what to take away from such vast panoramas of imagery? Forget 3-D (and yes, that includes you, Avatar); that, my friends, is true immersion, an often exhilarating reminder that what you are watching is honest-to-God cinematic in the best sense.

Recently, I saw two films that reminded me of my love of the long shot: Michelangelo Antonioni's fictional L'Avventura (1960) and Ilisa Barbash & Lucien Castaing-Taylor's documentary Sweetgrass (2009). (By the way, yes, I only recently finally got around to seeing L'Avventura for the first time ever...and, well, let's just say, I'm impressed but also eagerly awaiting a chance to see it on a big screen.) 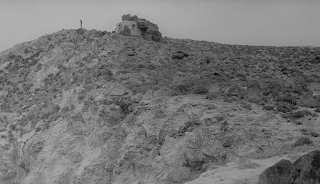 The island on which the events of the first hour or so of L'Avventura transpire is not just a literal setting; in Antonioni's hands, they become a kind of barren psychic landscape, conveying the characters' spiritual desolation. So it's only appropriate that there are many deep-focus long shots, like the one seen above, throughout the film. In essence, Antonioni and his cinematographer, Aldo Scavarda, visually contextualize the characters' (lack of) passions, properly situating them within the purview of a wider world that could care less about their relatively trivial concerns.

There are many precious shots like that in Sweetgrass, a documentary that, for most of its running time, follows a couple of shepherds in Montana as they herd a large flock of sheep one last time through the Beartooth Mountains in 2003. There's one particular long shot—it was filmed, on digital video, by Castaing-Taylor himself—that stays with me: an aerial shot in which we glimpse, from a far distance, the sheep as they slowly bleat their way down the side of one of the mountains. It's a scenically splendid shot, of course, but, in the context of the film, it also carries a larger thematic resonance. Sweetgrass, which starts out by simply observing the ways of sheep and shepherds before a couple of them venture forth into the Beartooth Mountains with their flock of sheep, eventually deepens into a portrait of men struggling to control the elements during their journey, whether those elements are grizzly bears, human limits or simply the sheep themselves. But nature, for the most part, eventually wins out—and that sense of man being overwhelmed by nature is precisely what makes Castaing-Taylor's many extreme long shots so beautifully expressive in addition to being merely impressive.

There are plenty of other examples of movies that employ long shots to brilliant effect—Playtime (1967), Barry Lyndon (1975), and that Catalan film Birdsong (2008) released in New York last year, come immediately to mind—but perhaps I will explore those other examples in a later post. (And, of course, readers, feel free to list other memorable examples of long-shot cinema in the comments section!) For now, though, I just wanted to say this one last thing about long shots: that, while no two long shots are alike in what they contain and what they express, generally these kinds of shots, for me, serve as potent reminders that, in life, however wrapped up you may be in pursuing your own personal passions or handling your own private problems, that a) the wider universe could care less (I don't see that as nihilism; it's just the truth), and b) there are always situations better and/or worse than the one you may be in. Long shots, in short, not only provide a dizzying sense of visual perspective, but, for the receptive viewer, can also summon forth a more introspective sense of personal and philosophical perspective. And, in light of some of the personal shit I've had to deal with recently (one day I may get to explaining this, but not now), there's nothing more necessary than the kind of art that can inspire such a profound awareness. Because, I mean, isn't that what the best art can do: bring us closer to life, in some way?

Finally, another image from L'Avventura to close out this brief ode to the long shot, this one featuring the film's star Monica Vitti. Because, well, who wouldn't want to see the gorgeous Monica Vitti, even in long shot?

Certainly these men do: 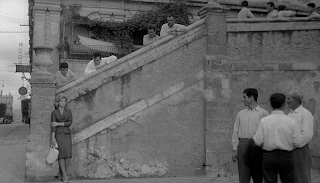