Water, Water Everywhere: An Image from Tsai Ming-liang's Rebels of the Neon God 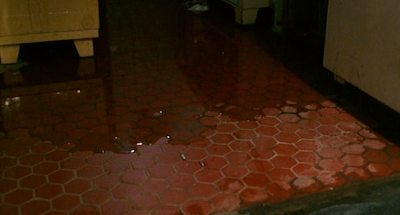 Who else but Taiwanese director Tsai Ming-liang could shoot an image of water creeping up an apartment floor and make it seem as ominous, tragic and strangely beautiful as the screengrab above?

After having my mind thoroughly blown by Tsai's The Hole (1998) and his as-yet-unreleased Face (2009) last year, I'm only now finally getting around to checking out the rest of his creative output. Yesterday, I kicked off my Tsai-on-DVD explorations with his 1992 debut feature Rebels of the Neon God, from which the above screen capture is taken. It's a grittier and more realistic movie than the others of his I've seen, but even with a relatively conventional storyline, one owing a certain debt to Nicholas Ray's Rebel Without a Cause (1955), the film already features traces of Tsai's distinct brand of alienated lyricism, which he would expand upon to glorious effect in his later, wilder works.

It also features water. Not as much water as, say, the monsoon that drenches turn-of-the-millennium Taiwan in The Hole, or the flood at a spectral construction site in his Malaysia-set I Don't Want to Sleep Alone (2006), or even the explosion of water from a pipe that bursts in Hsiao-kang's (Lee Kang-sheng) apartment in a hilarious extended opening gag in Face. But water continually flows out of a hole in the ground of Ah Tze's (Chen Chao-jung) apartment in Rebels; he has apparently gotten so used to the flooding that he walks around his wet apartment as if nothing was on the floor. And yet, try as he might to either ignore the problem or stanch the liquid overflow, water still manages to flow through—and in a scene in his apartment towards the end, after a sales deal gone wrong leads a dear friend of his to get severely beaten up, Tsai hits us with the image above: water slowly creeping toward the camera like a blob gradually inching towards land.

Much like the anomie that swirls in neon-lit Taipei in Rebels, the water in Ah Tze's apartment just leaks aimlessly about, not heading in any particular direction. But it remains an underlying presence, spreading over his apartment floor like the urban angst that hangs over his characters.

That right there is the kind of madly poetic detail that has come to fascinate me endlessly in Tsai's films. Where does he come up with these ideas? Does anyone else see the world, and the human beings populating it, the way Tsai does? Whatever the source of his peculiar sensibility is, I'm finding it more and more of a pleasure to bask in each new cinematic vision of his I encounter. More to come, I hope...
Posted by Kenji Fujishima at 1/31/2010 05:51:00 PM

He's the definition on an auteur as a director whose cumulative output makes more sense and means more to the viewer in context to each individual work. 'Rebels' is his only film that I haven't seen, and partially because I don't like the idea that there will be no more new Tsai to watch once I have.

Anyway, nice piece. Water is definitely a recurring element in his films (and I believe I've read that this stems from his own /fear/ of water, though I can't be certain of that). Have you seen "What Time is It There?" yet? That whole run of films from 'What Time,' to "Goodbye Dragon Inn" to "The Wayward Cloud" is still probably his peak.

But his best film overall, without question for me, is still "Vive L'Amour."

The Tsai films I have seen so far: Rebels of the Neon God, The Hole, I Don't Want to Sleep Alone and Face. Vive L'Amour his best, eh? Alas, that's one Tsai film (other than The Hole) that seems to be currently unavailable via Netflix at the moment, ack!

Totally subjective and could change tomorrow, but there you have it. I'm actually not a gigantic fan of "The Hole"—I think both 'Cloud' and "Face" are more artistically accomplished, and do similar things—but it's certainly good. The only one I kind of don't like is "I Don't Want to Sleep Alone," but even that one has some beautiful images (like the closing shot, which would echo in "Face"). Damn, what a fascinating filmmaker though! Could write about him forever.