BROOKLYN, N.Y.—Okay, the idea behind the next few posts on this blog is this: Because I didn't get to update much during my recent Ebertfest experience, and because so far none of the editors of The Wall Street Journal's Speakeasy blog have seen it fit to publish that first dispatch I sent them on Friday—I guess news events like the Royal Wedding (really?) and the death of Osama bin Laden (all right, I concede that is a bona-fide Big Deal) will naturally trump a mere festival dispatch like mine—I will go ahead and try to recap the experience, reasonably complete and uncut, here on this blog.

This will take a few days, I suspect...so let's dive right into it, shall we? 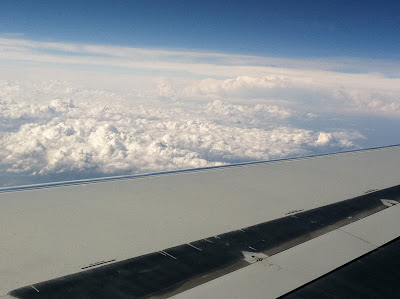 There was no doubt in my mind on Tuesday, April 26, that I would eventually get to Champaign, Ill., for Roger Ebert's Film Festival, the five-day film-appreciation extravaganza also known as Ebertfest (this is its 13th year). It just ended up taking far longer than expected.

As I was walking to a restroom after having gotten past the usual security checkpoints at LaGuardia Airport in New York, I overheard someone saying something about a bunch of flights being delayed as a result of brewing inclement weather in the Chicago area—Chicago's O'Hare International Airport being my destination for a connecting flight to Champaign. Uh-oh. My concerns were not ameliorated when I received a text-message alert via American Airlines at around 11:45 a.m. suggesting that the departure time of my scheduled 1:35 p.m. flight was now pushed back by 10 minutes. Then, at around 12:55 p.m., I got another alert saying that departure time was now 1:55 p.m.

At around 1:40 p.m. or so, all of the passengers were finally allowed to board the plane; eventually the plane started pulling out of its gate and slowly made its progress toward takeoff. And then it stopped...and proceeded to stay still. Then, an announcement: This flight was going to be delayed for 15 minutes until they got word from air-traffic controllers in Chicago that it was safe to take off. We waited for about that length of time...and then we got another announcement saying that they needed to wait another 30 minutes for said word!

Well, I said to myself after all this waiting, it sure doesn't look like I'll be making my 4 p.m. connecting flight to Champaign at this rate. And so it came to pass. The plane finally took off at around 3 p.m. and landed in Chicago at around 5:15 p.m.; when I landed in Chicago, I immediately booked a seat on a flight scheduled to leave at 6:15 p.m. Okay, fine, I thought, these things happen (though this was the first time, in my memory at least, that I had had to deal with a delayed flight). But then that connecting flight got delayed! The reason? Apparently, they were waiting for the crew to arrive from a previous flight. So this time, no weather-related delays—just a missing crew!

A silver lining to this particular cloud arrived, though, in the form of Ali Arikan, a friend, fellow film critic/writer and one of Roger Ebert's Far-Flung Correspondents; it turned out we were on the same flight from Chicago to Champaign! Funny how things just seem to work out that way in life. So I didn't have to be lonely while waiting for the delayed flight; instead, I ended up having drinks with him and chatting before we were finally allowed to board the plane at around 7:40 p.m. 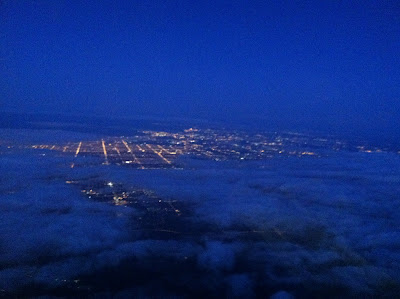 The trip from Chicago to Champaign took a mere 30 minutes once in the air, so we landed at Champaign's Willard Airport at around 8:50 p.m....but my extended-length voyage to Ebertfest wasn't quite done yet! When Willard's one baggage-claim carousel (it's a tiny airport) had gone around a couple of times, I realized that I didn't see my checked bag anywhere! When I checked with an employee there, he looked up my information on a computer and discovered that my bag was on the Chicago-to-Champaign flight after the one I was just on! Seriously??? (In talking to a couple of random people at the airport, I discovered that this kind of thing is not a rare occurrence at that airport.)

I was given the option of either waiting for that next flight to land in order to look for my bag, or to have it delivered to the place at which I was staying. All right, I figured, if it's just one more flight, and if that next flight is coming within the next hour, I can wait. So, after Ali was forced to part ways with me as he was rushing to get to a Q&A session for Ebertfest's pre-festival screening of Chris Smith's 1999 documentary American Movie (which I would have loved to have seen—given that I haven't seen it yet—if those blasted delays hadn't prevented me from being able to make it in time for the beginning of the film), I sat around until 10 p.m. or so, when the next Chicago-to-Champaign flight landed. When I stood around the baggage-claim area and looked closely for my bag, lo and behold, there it was!

My luggage having finally been procured, I took a cab and noticed the general emptiness of the Urbana streets. (Hey Fever Ray, this might have been just as fitting a venue for your haunting "Keep the Streets Empty for Me" video as...Sweden, I'm guessing?) I was warned that this was mostly a pretty dead town, and so it appeared to be. I really did feel like I was driving through a ghost town; it was eerie...and rather seductive, in its own way. (There is one lively stretch in the town, though, of which I will explain in a future post.)

Through these empty streets, I headed toward the home of my host, a University of Illinois Urbana-Champaign literature professor whose place I had discovered thanks to the site Airbnb.com—kind of a variation on couchsurfing.com, except people actually get paid for offering up a room for travelers like myself. It was a nice place, and the room I had was comfortably spacious (not that that made a huge difference, in the end, considering how little time I spent at the home). But there was something even more special about this place than I had realized, something I didn't know about until a week before this trip: Apparently, the house was recently designated a historic landmark because none other than former American president Abraham Lincoln slept in one of its rooms! Read this article if you don't believe me!

Oh, and George (whose wife and daughter were away in Toronto during my stay there) also had this dog:

Thanks for your hospitality, George! It was very much appreciated! Maybe we could do this again next year?

Coming up on this epic, multi-part Ebertfest recap: The festival kicks off in grand fashion with the near-complete Metropolis with a live performance of an original score by the Alloy Orchestra. Plus...Natural Selection again? Will I warm to it more the second time than I did the first at South by Southwest in March?

It was wonderful to meet you at EbertFest (at the Thursday breakfast), and I hope you enjoyed the remainder of the festival. I'm looking forward to your take on it.

Thanks, Jeff! It was likewise nice to meet you and Kelly as well! (By the way, I was going to mention both of you in the so-far-unpublished blog post for The Wall Street Journal, just so you know.)

I love travelogues like this one, and I'm looking forward to reading the rest. The more epic the better!

Sorry about the baggage snafu at the C-U airport. That's never happened to me before...kind of pathetic that it's standard operation procedure there. :l

Great to meet you last week. You had a little cameo in my blog, too:
http://alizarine.typepad.com/weblog/2011/05/roger-me.html

Oh hey, that's me! Yeah, I mean, part of the reason I decided to go to Ebertfest this year was just because of the social interactions. I don't want to be the kind of guy who excludes others just because I'm amongst more familiar company! Maybe this is a part of Ebert's influence, as well.