An Image of...What Else? Rapture!

BROOKLYN, N.Y.—Apparently, one man with a history of getting these kinds of dates wrong predicts the Rapture will happen today, and everyone gets into a tizzy either believing in the imminent end of the world, or joking about how stupid the believers are.

For me, the only real value of all of this Rapture chatter is that it gives me an opportunity to post this screen capture: 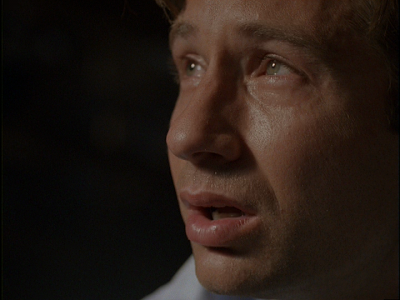 That's David Duchovny as Fox Mulder in the (criminally underrated) fourth-season X-Files episode "The Field Where I Died" (an episode that has something to do with the Rapture, but isn't its main focus). Doesn't he look oh so, well, enraptured by extreme possibilities? If the pitch-black background and the skyward direction of Duchovny's teary eyes don't inspire thoughts of religious contemplation on the day that the true believers supposedly go to Heaven, then I don't know what else will!

Oh, and no, I haven't seen Michael Tolkin's 1991 film The Rapture, which also features Duchovny. Though I have to admit, my interest in seeing that has shot through the roof with all this silly Rapture talk in recent days. Remind me of how this became a major news story again?
Posted by Kenji Fujishima at 5/21/2011 10:00:00 AM

Email ThisBlogThis!Share to TwitterShare to FacebookShare to Pinterest
Labels: images, the Rapture, X-Files

As far as I can remember, which isn't much, the billboard drew our attention and then it was all funsville from there!!

Yeah, that was how I first heard about the supposed importance of May 21. I just didn't expect it to quite blow up the way it has.