I began to like New York, the racy, adventurous feel of it at night, and the satisfaction that the constant flicker of men and women and machines gives to the restless eye. I liked to walk up Fifth Avenue and pick out romantic women from the crowd and imagine that in a few minutes I was going to enter into their lives, and no one would ever know or disapprove. Sometimes, in my mind, I followed them to their apartments on the corners of hidden streets, and they turned and smiled back at me before they faded through a door into warm darkness. At the enchanted metropolitan twilight I felt a haunting loneliness sometimes, and felt it in others—poor young clerks who loitered in front of windows waiting until it was time for a solitary restaurant dinner—young clerks in the dusk, wasting the most poignant moments of night and life.

Again at eight o'clock, when the dark lanes of the Forties were five deep with throbbing taxicabs, bound for the theater district, I felt a sinking in my heart. Forms leaned together in the taxis as they waited, and voices sang, and there was laughter from unheard jokes, and lighted cigarettes outlined unintelligble gestures inside. Imagining that I, too, was hurrying toward gayety and sharing their intimate excitement, I wished them well.

I had completely forgotten about this evocative description of New York at night until I heard it recently in the context of Gatz, the Elevator Repair Service's brilliant word-for-word stage dramatization of Fitzgerald's great American novel. In this one passage, Fitzgerald vividly describes the nocturnal New York of not only my own perceptions, but also of my dreams. (What that suggests about my dreams...well, I'll leave that to you all to consider.)

What Wong Kar-Wai did with images for Hong Kong in Chungking Express and (especially) Fallen Angels, Fitzgerald apparently accomplished about seven decades earlier with words for New York in The Great Gatsby. "Oh the night is my world..."

[Yes, I did just quote a line from that Laura Branigan song, "Self Control." What of it?]

Speaking of the night, here's a photo I snapped on Sunday of the night sky overlooking Union Square (taken while I was alone, naturally): 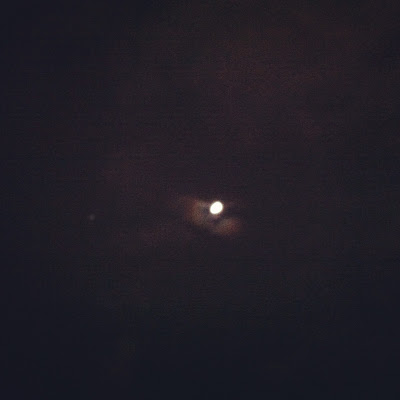