Maurizio Cattelan: All: A Multi-Media Post-Mortem

BROOKLYN, N.Y.—If nothing else, the work of Italian artist Maurizio Cattelan—whose work was recently the subject of a near-complete retrospective, titled Maurizio Cattelan: All, at the Solomon R. Guggenheim Museum in New York, one which ended Sunday (yes, as with the Museum of Modern Art's Willem de Kooning retrospective, I waited until the last minute to see this)—more often than not provokes us into an internal conversation as to how serious this guy actually is.

The "layout" of the exhibit itself clues you in as to Cattelan's sensibility: 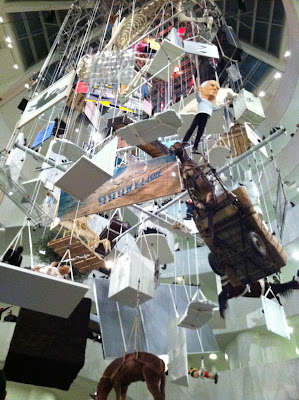 Instead of the usual stately art-hanging-on-walls approach, Cattelan decided to "hang" all of his art from the Guggenheim's ceiling. A mere gesture of "look-at-me" irreverence, or something more deeply subversive? Considering that much of Cattelan's art has been site-specific in nature, his approach to All suggests an attempt to radically decontextualize his work and allow the viewer to determine how his work stands up by itself.

Perhaps this accounts for the extreme unevenness of the art on display. Works of bracing surreal creepiness—much of his taxidermy, for instance (are there other modern artists who have worked so extensively with taxidermy? I ask as an art novice, mostly)—and even occasional beauty alternate between other, thinner visual conceits that smack of an artist having a private joke of our expense. But perhaps some of the latter works resonated more within their original surroundings?

Still, there is something to be said for the kind of exuberant bomb-throwing spirit that was on display at the Guggenheim in this exhibit. At the very least, give me this kind of provocation over yet another boring still life any day!

I'll let these photos speak for themselves, from here on in (hardly an exhaustive selection, but some of the most memorable pieces, to my mind:


And finally, some video of the experience! Two shots: one of Untitled (2001), which is not much more than a miniature elevator; the other taken at the top of the Guggenheim looking down into the morass of Cattelan art.