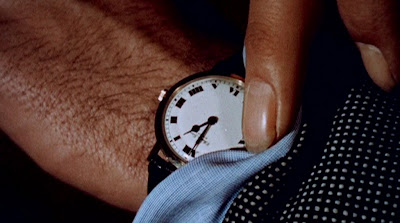 I remember the time I first heard about Christian Marclay's The Clock: February of last year, just one day before it ended its blockbuster run at the Paula Cooper Gallery in Manhattan's art-dominated Chelsea district. That sounds like such an awesome idea, I remember thinking to myself. Why didn't I hear about this before???

The idea, by the way? The Clock is a video installation in which the Swiss-American visual artist amassed thousands upon thousands of film and television clips and assembled them into a real-time, 24-hour-long collage in which each scene corresponds to the actual time of day in which it is occurring in real life. So, for instance, if you were watching Marclay's work at, say, 4:15 a.m., during that minute you would most likely see images of clocks, watches and other timepieces onscreen indicating that it was indeed 4:15 a.m. And so on.

What, that doesn't sound like a deliriously awesome feat to you? It sure did to me...but, when I realized that I had only one day left to go see it at the Paula Cooper Gallery and no time on that one day to fit it in, I vividly remember the regretful feelings I had, in addition to the big question that loomed in my mind: Would I ever be able to have another chance to see this again? 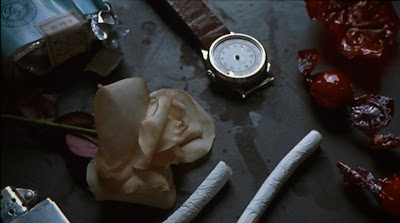 A year and a half later, guess what? The Clock is back in New York for an encore engagement! This time, instead of at a gallery in Chelsea, Marclay's massive video piece is unfurling in the Upper West Side, at a David Rubinstein Atrium specially repurposed for this event.

A friend of mine back in my old East Brunswick, N.J., stomping grounds is gearing himself up for the spectatorial feat of sitting through all 24 hours of The Clock in one marathon sit. (He's not the first one to do it; these two guys have already pulled off this coup.) I was actually considering joining him in this extreme movie-watching endurance test until I remembered previous commitments I had already made. So it looks like I'll be taking in Marclay's video the way I imagine most people will be approaching it: piecemeal, at various times of the day and night.

I'd certainly like to try to see all of The Clock. Whether that will happen will depend on things like, you know, life, time, previous commitments, in-the-moment inclinations, and so on. I will do my damnedest to try to pull it off, however...and I figure, maybe blogging about the quest will give me motivation to make the extra effort. So here I am.


My Clock-watching journey began more or less on a whim Saturday night. Astral Converted, the Trisha Brown-choreographed dance piece that I saw at Park Avenue Armory that evening, was only about an hour long, and since it started at 7:30 p.m., it was over by about 8:30. In my world, at least, that's considered an "early" time for which to end a day. So I decided to take a cross-town MTA bus to get to the David Rubinstein Atrium and wait on the line to see however much I felt like seeing in The Clock, which was running continuously from Friday at 8 a.m. to Sunday at 10 p.m. (during its run from this past Friday all the way to Aug. 1, it'll be running all day and all night on weekends).

Because I invited a friend to see it with me, I waited for him before I got on the line at around 9:10 or so. As you might have guessed, I ended up waiting a little more than half an hour before I finally was able to get into the Atrium to see The Clock. According to the Atrium's Twitter feed (@LCAtrium), that was about par for the course for the wait times this past weekend; I can only imagine how much more insane the wait times will be as it nears the end of its run!

So at around 9:45 p.m. my friend and I was in. We weren't immediately seated in one of the comfy couches offered for Clock-watchers, though; instead, we sat on a bench towards the back, waiting for the possibility of spots in one of those couches opening up for both of us. Eventually, a couple of adjacent spots did open up...but by then, I, for one, was already fully immersed; a change of "scenery," so to speak, made little difference to the experience.

My snap reaction to entering Marclay's world was one of confusion: Wait, I thought this was going to be, like, images of one timepiece after another. Why are these clips going on longer than I was expecting? The Clock, it turns out, isn't just about running images of timepieces together, as I had assumed going in; Marclay also wants to include what movie/TV characters are actually doing during a given moment in time.


What are most movie/TV characters doing during 9:45 p.m. - 11:30 p.m.? Many of them, it turns out, are getting ready for bed. For some of these characters, adventures are just about to begin (for instance, Marclay includes a clip from Jim Jarmusch's Night on Earth (1991): the opening of the second New York-set taxicab episode, with Giancarlo Esposito loudly expressing his frustration at being unable to successfully hail a cab). Others are still hard at work—journalists, for one thing (thus an inclusion of a clip from Ron Howard's The Paper (1994) during a "Eureka" moment Michael Keaton's newspaper-editor character has in the newsroom). And, of course, FBI agents like that beloved duo Fox Mulder and Dana Scully are still doing their investigating late into the evening (yes, Marclay has seen it fit to throw in a brief shout-out to The X-Files sometime during 11-11:30 p.m.).

But it isn't all just normal, everyday cinematic activities Marclay includes. What better time for some of the ripest of horror-genre horrors to flower than during nightfall? In one memorable juxtaposition, Marclay puts together two different clips of two different movie characters falling prey to swinging saws while chained to gurneys. This moment is not only an amusingly intuitive bit of editing, but it could also be seen as a kind of implicit satirizing of a popular horror-movie trope.

Based on the 105 minutes of The Clock that I saw, at least...well, sure, The Clock can certainly be described as a "love letter to cinema"—but how so, exactly? Through his editing juxtapositions, Marclay seems to be trying to paint a kind of alternate world as presented through the movies. How does Cinema as a whole get through 24 hours normally? As is surely the case in Reality, a wide variety of things happen in Cinema on any given day. The Clock is, in many ways, an epic tribute to cinema's ability to encompass the full range of human experience. That it sometimes also functions as visual film criticism, as in the bit of editing I cite above, only increases its awe-inspiring richness.

What happens in the world of Cinema at 4 a.m., when most real people, I imagine, are fast asleep? How about lunchtime or dinnertime? What about when the clock strikes midnight? I've only seen, like, 7% of The Clock, and I'm already dazzled enough that I'm chomping at the bit to see what other insights and playful juxtapositions Marclay has in store for us.

This was in London a little while ago and like you the first time I was intrigued but couldn't find the time (irony alert) to travel down and see a little of it. Can see why its capturing the imagination though. The ultimate super-cut.

It's interesting we both caught on to the idea of an "alternate world" represented through the movies. I love what I'm hearing about the night scenes in The Clock! Noon was great, and I'd love to see what other times are like.

If you see more, I'd like to hear what you think about the idea of manipulating cinematic time, yet always staying true to real time.

Oh, I'll be seeing more, no doubt about that! Just when and how much are the open questions (I might have to pull an all-nighter one evening to be able to see the early-morning hours).