BROOKLYN, N.Y.—Just because I was on vacation in Amsterdam doesn't mean I slowed down my artistic consumption. Heck, if anything, Amsterdam itself could be seen as one giant art museum, with all manner of classic architecture on display!

I'm back in the United States, by the way, as you all could surely tell from the dateline of this blog post. Maybe, sometime this week, I'll get around to doing what I never actually got around to doing on this blog during my trip and posting some impressions, photos and such. Maybe.

Skyfall (2012, Sam Mendes), seen at Pathé De Munt in Amsterdam
A part of me wants to applaud the attempt on the part of director Sam Mendes and screenwriters Neal Purvis, Robert Wade and John Logan to imbue the iconic British superspy with something approaching genuine emotional depth. But I already think this was successfully accomplished in the series—in Casino Royale, current Bond Daniel Craig's first outing as 007. Part of the stunning impact of Martin Campbell's 2006 entry wasn't just the novelty of seeing a freshly reimagined James Bond, but in witnessing, for all its thrilling action fireworks, a genuinely affecting drama about the death of a hero's soul. Has this brooding, angst-ridden Bond already worn out its welcome? The half-baked previous installment, Quantum of Solace, certainly didn't help matters, though I still kinda/sorta like that entry more than most critics did. Parental issues, literal and figurative, get a work-out in Skyfall, but it's like trying to impose humanity onto a total void; after a while, the banality of its brand of psychoanalysis becomes crushing. That's why I had trouble taking its third act all that seriously as emotional drama, especially when it eventually hinges on a silly Straw Dogs-like scenario of Bond being forced to protect his turf from his nemesis Silva's (Javier Bardem) cronies.

So overall, I can't really work up nearly the same level of enthusiasm that many of my colleagues have expressed regarding this latest Bond film; maybe, the truth is, beyond Casino Royale, I just don't have much of an investment in this character. But the action scenes are generally well-executed, and sure, Roger Deakins's cinematography is worth the singling out it's been getting among critics (although "best-looking Bond movie ever"? People who are making such an extravagant claim ought to give Claude Renoir's work in The Spy Who Loved Me another look; the Cairo sequence in Lewis Gilbert's 1977 Bond film is about as visually seductive as the high-point Shanghai sequence here). Skyfall shows the Bond series as technically adept as ever; it's when it tries to be something more than it falls fatally short. I never thought I'd say this after Casino Royale and even Quantum of Solace, but I'm looking forward to the next Bond film being just another gimmicky action extravaganza, without the increasingly risible attempts at angst-ridden emotional baggage.

Technique (1989, New Order)
This album finds the British synthpop band more inviting than ever before. It's all rather pleasant to listen to, in fact, and the beats are as infectious as ever. I can't say I find much memorable about it beyond that—except that sure, I've finally gotten used to Bernard Albrecht's tuneless singing.

But wow, the venue! At the very least, the Concertgebouw easily beats Lincoln Center's Avery Fisher Hall in sheer visual grandeur. I mean, look at this... 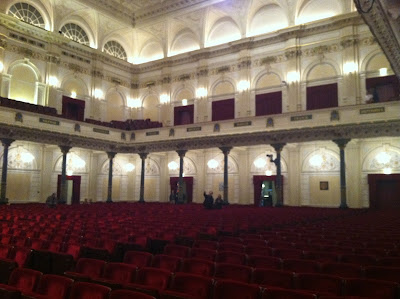 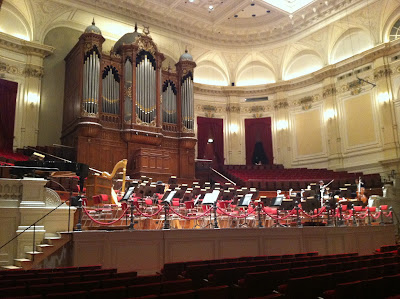 It's enough to make me forget how bland the actual concert was.

My Big Fat American Election (2012, Pep Rosenfeld/Greg Shapiro/Michael Orton-Toliver/Andrew Moskos), performed by members of Boom Chicago at the Chicago Social Club in Amsterdam
Because I was in Amsterdam during Election Day here in the U.S., I decided, on a tip from my Dutch host, to go check out this Amsterdam-based, English-language comedy troupe on Tuesday, Nov. 6, to get my Election-Day fix. I had a good time overall—and while these members of Boom Chicago certainly admit their leftist leanings from the start, some of their best jokes take aim at both candidates as well as at the blatant manipulation that goes into these kinds of political contests in general. That kind of bipartisanship maybe made up about 40% of their shtick, though; much of the rest is mere choir-preaching—but sometimes the choir-preaching was pretty funny as well. I'd recommend checking Boom Chicago out for those of you who venture to Amsterdam in the future; their comedy improvisations are especially worth witnessing.


★ "The Last Supper by Andy Warhol," seen at De Nieuwe Kerk in Amsterdam
Amidst the stained-glass windows and lavish architectural marvels of De Nieuwe Kerk, there stood this wholly pink Andy Warhol's canvas from 1986, twice reproducing Leonardo da Vinci's famous late-15th-century depiction of Jesus Christ's final meal with his 12 disciples before his betrayal, turning it all pink and black, and, in Warhol's own inimitable way, daring us to access the spirituality of the original work in a more "commercialized" form. Plus, the dissonance of seeing this very modern work of art in the context of a 15th-century church added an extra frisson to the experience that you might not necessarily get anywhere else (except, I guess, in other churches).

★ "Vincent. The Van Gogh Museum in the Hermitage Amsterdam," seen at Hermitage Amsterdam in Amsterdam
Many of my friends had suggested that I should go check out the Van Gogh Museum while I was in Amsterdam. Alas, the museum itself was closed for renovations last week, and will remain so until next year. Until then, though, part of the Van Gogh Museum collection was up at the Hermitage Amsterdam—so I checked that out instead. The main thing I took away from the exhibit was a refreshed awareness of Van Gogh's seemingly endless curiosity, his willingness to constantly tinker and refine his style and try new subjects and approaches. I had no idea, for instance, that, for a certain spell, he was obsessed with Japanese art, to the point of "copying" some Japanese canvases and filtering it through a style that feels distinctly Van Gogh-ian. I guess I'll just have to make another trip to Amsterdam in the future in order to see the full Van Gogh Museum collection. For now, though, I was mostly pretty satisfied with the selection on offer at the Hermitage Amsterdam.
Posted by Kenji Fujishima at 11/12/2012 06:00:00 PM