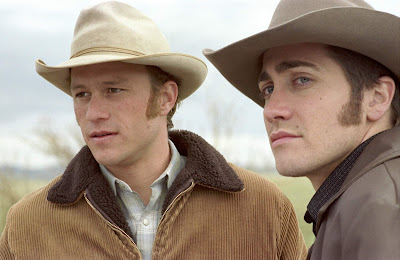 EAST BRUNSWICK, N.J. - This afternoon I was all set to type out that entry about There Will Be Blood I've been promising, when this news broke.

I first heard about Heath Ledger's sudden passing when I saw this blog entry on what is normally a TV-related blog. At first I thought it was a joke. Then I read on, realized that it wasn't, and said "Holy shit!" out loud in my empty bedroom.

Earlier this week, Brad Renfro died, and I barely felt a thing about it except "too bad" (as insensitive as that may sound). I hadn't really heard much about him in the past five years or so, so while I felt it was a shame he died so young, I couldn't say it viscerally shocked me or anything.

But Ledger's death...man. Way too young. Not only that, he seemed to have a good solid acting career going, making interesting choices (like Brokeback Mountain or, most recently, I'm Not There), and probably would have had a few more great performances in him yet.

I'm not really good with this kind of stuff---I haven't really had to deal with serious grief yet over a loved one's passing, although I've certainly felt humbled and saddened by the untimely deaths of others---so, in Ledger's case, allow me to just bear witness to his work.

To be honest, I wasn't really a rabid fan or deep admirer of Ledger's acting---not that I disliked him or found him overrated or anything, just that I never really familiarized myself deeply with his range of performances. Still, I think one look at his performance as Ennis Del Mar, the cowboy who represses his homosexual urges in Brokeback Mountain, and you could see genuine talent there, and maybe the possibility of carving out his own kind of niche as an actor/star.

Any flashy actor could have adopted the kind of mumble that he did, but Ledger, with palpable heart and empathy, pushed it beyond mere vocal mannerism and sold it as the discomfort of a deeply macho man---a cowboy, really---who finds himself struggling with his love for Jack Twist on the one hand, and his fear of the reprisals he might suffer if he ever expressed that love in public on the other. Quibble however you want about the worth of the movie itself, but his portrait of repressed passion was actually quite moving---you could sense the self-repression, and that made his emotional outbursts all the more powerful. A performance worthy of comparison to Brando, as a critic at the time of the film's release suggested? Well, perhaps Ledger, more accurately, did Brando somewhat in reverse in that film: Brando put his passion out there on the screen for everyone to see, while Ledger kept that passion purposefully bottled up.

That kind of deeply empathetic performance from any actor at such a young age would certainly bode well for any actor's artistic career, as far as I'm concerned.

Damn, this kinda makes me want to watch Brokeback again. Didn't think anything would make me revisit that film, but there you go. (Funny how life is sometimes.)

Anyway, it's deeply regrettable news, and because it so startled me, I felt I had to write something about it, even if I'm not enough of a Heath Ledger fan to have anything insightful to add about him as a person, a personality, or an actor.

So I hope this suffices somewhat. At least he left us, in Brokeback Mountain, with a tantalizing sense of the kind of emotional depths he might have been capable of again in future performances.