EAST BRUNSWICK, N.J. - This was kind of a weird week in my life emotionally.

For half of it, I felt not only depressed---mostly about how static and dull my life has felt in the past couple of weeks---but downright taken with the sentiment expressed by Daniel Plainview (that man again!) in There Will Be Blood---that I'd rather just get away from everyone and live alone in order to not have to deal with "people." (Insert maniacal laugh here.) Well, perhaps I'm exaggerating a bit, but I think that captures how strangely sad I felt. (I won't bore you all with the details about how I became so downtrodden; let's just say that I began to suddenly feel both real bored with my life and real frustrated with certain personal issues that popped up. If you're interested in details, perhaps I'll explicate if you leave some nice comments :-) .)

All of that negative energy seemed to dissipate in one fell swoop with five words: Flight of the Red Balloon. 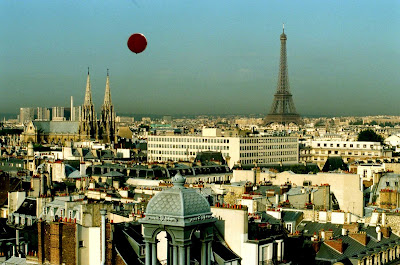 Readers, on Wednesday evening I went to a press screening of Hou Hsiao-hsien's latest work---a reimagining of the Albert Lamorisse classic The Red Balloon, and his second film, as far as I know, set outside of his native Taiwan---and it was exactly the tonic I needed to lift me up from my doldrums. It's that awesome. I've always had at least a detached appreciation for Hou---depending on my mood at a given point in time, sometimes I find him profoundly patient and revelatory, sometimes merely slow and dull---but I was practically walking on air, basking in the film's warm glow, after I left the screening room Wednesday night. I'm writing a review of this for The House Next Door, so I'll have much more to say about it when it opens (at the IFC Center on April 4). But of course---picking up on last week's theme of emotion vs. intellectualism---that review will probably express a more thoughtful, considered reaction than the one I have now. For this particular point in time, however, I will just say that the movie left me not only feeling more open to life---challenges and all---but also eternally grateful for the enriching possibilities of art.
Posted by Kenji Fujishima at 3/21/2008 02:17:00 PM

The details won't bore us, people who read this want to know. What happened that you were feeling so down? You have so much to look forward to.

As someone who is trying not to dwell too much on things that depress me, forgive me for keeping those details close to my chest this time. Suffice it to say, a few factors led me to feel like I was stuck in a rut, accomplishing not nearly as much in my free time as I used to (it feels like weeks since I've actually listened to a fresh new music album, for instance, because I've been so busy dealing with other stuff---including writing assignments and this particular blog---on the side), and having to deal with frustrating real-world issues to boot. I'm hoping to get out of it soon, though, and today I felt like I started to see some light at the end of the tunnel, so to speak.

Thank you for your honesty. I know you will share what you want, when you want to. Good to hear that you are feeling a bit better about things and I hope it all will turn around for the best. Any time you want to vent, you have readers who are interested and will give you feedback. Its ok not to, though.

I appreciate it, thanks. Who knows? Maybe, when I (hopefully) get around to updating the blog at the end of this week, I'll be more willing to share.