Sensations: Both Locked-In and Three-Dimensional

EAST BRUNSWICK, N.J. - I'm kicking around with the idea of writing a deeply personal, exploratory entry about my own movie tastes, because recently I've been pondering my free-floating ideas of what I, Kenji Fujishima, would consider a "good" movie---different for everyone, obviously, but not so easy to pin down for someone like me who tends to examine his reactions to almost anything under a microscope (especially if a particular reaction doesn't jibe with the consensus on something). I'd think I'm an emotional, Dionysian kind of guy ("How does it feeeeeel?" famously sang Bob Dylan), but the Apollonian in me almost always has to assert itself whenever I think I've settled on a particular opinion. It's the classic case, in other words, of "I felt great looking at it, but..."

For now, this week's entry will mostly be short takes---on movies I've recently seen, and a couple tidbits about things going on in my (otherwise unremarkable) life. 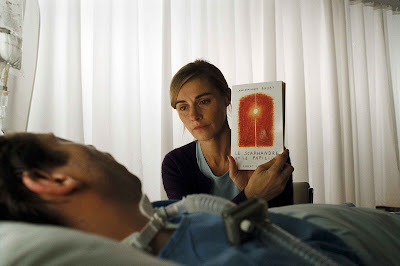 I finally caught up with Julian Schnabel's celebrated adaptation of the literally blinked-out memoir The Diving Bell and the Butterfly last weekend, and I have to say: for a movie that obviously tries so hard to get inside the head of its main character---the late Jean-Dominique Bauby, a writer and editor-in-chief for Elle magazine who suffered a debilitating stroke that left him paralyzed and speechless as a result of a rare condition called "locked-in syndrome"---Schnabel's film ultimately made me feel more dispassionately impressed by the director's own visual ingenuity than feeling much specific empathy toward bedridden "Jean-Do."

Schnabel goes whole hog here, stylistically: lens flares, extended p.o.v. shots, metaphors made literal (a recurring image of a man in a diving suit underwater, for instance, that is meant to symbolize Bauby's own feeling of being trapped), relatively random flashbacks. Some of it is fascinating, some of it even wondrous, and certainly one can respect Schnabel's refusal to drown his movie in disease-movie-of-the-week bathos.

After a while, though, the sensory assault stops yielding the revelations of its first 20 minutes---in which we in the audience are successfully put into Bauby's body as he tries, with a good amount of frustration and resentment, to adjust to his new life---and becomes pretty monotonous and superficial. We never get a clear sense of the man as a fleshed-out human being, because Schnabel is apparently too busy trying to give us the impression that his swirling, flashy style is actually inside his ever-creative mind. But really, all we are left with, in the end, are the usual triumph-of-the-human-spirit clichés: he's angry about where he is now; he vows to stay productive amidst physical adversity; he tries to make amends for the person he was before, etc etc. Not that these clichés couldn't be genuinely moving stuff---there's a reason why Jim Sheridan's 1989 My Left Foot is so fondly remembered beyond its amazing Daniel Day-Lewis showcase---but Schnabel seems so wrapped up in his theoretically penetrating stylistic tropes that he seems to forget the living, breathing human being underneath. (Thankfully, Mathieu Amalric, the actor who plays Bauby, never forgets, although he has to fight a losing battle against Schnabel's visual fashion show.)

Maybe I should have read Bauby's memoir before seeing this film; perhaps it would have filled in some of the psychological gaps that Schnabel seems unaware exist. For me, the best way to look at The Diving Bell and the Butterfly is as a middlebrow experimental work---one that accepts the conventions of a standard-issue Miramax prestige drama and does its damnedest to dry out its sentimentality with a surfeit of visual surface activity meant to simulate Bauby's experiences and interpret his mindset. I applaud the intentions, and I admire parts of the film; I just wish the whole didn't seem so shallow and narcissistic---Schnabel, in effect, usurping Bauby's indomitable soul instead of locating and highlighting it. 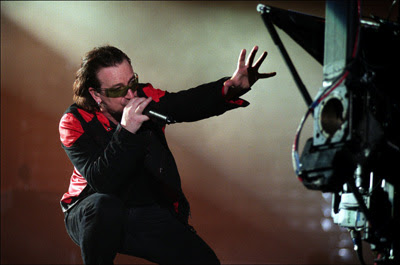 More sensations. Even though I have only a passing familiarity with the music of U2, I decided to go check out U2 3D anyway after having heard a good deal about how dazzling and even revolutionary it was (apparently it's the first live-action movie to be shot entirely on digital 3D).

Well, they certainly do successfully simulate the experience not just of being at an actual U2 rock concert, but at times of being on-stage right next to the members. And there are a few memorable instances of awesome 3D visual representation: Bono's left hand seems to come right out of the screen to wipe away your tears during the band's rendition of "Sunday Bloody Sunday"; during one song, directors Catherine Owen and Mark Pellington play with putting words on the screen (in something approximating Godard style); and there are even instances of animation throughout that seem suspended in air thanks to the 3D technology.

Combined with the neon lights, uncluttered stage designs (done by Owen, the band's usual production designer) and the big-screen images behind the band that highlight the songs, U2 3D provides a real treat for fans. For non-fans like me, though, I felt mostly on the outside looking in---impressed in a detached way but not really inspired to ecstatic highs even by the isolated moments of 3D splendor.

Still, the film, at the very least, does suggest some real artistic possibilities for the digital 3D format---not just for the expected technological awe, but for some kind of genuine human emotion and expression. If anything, the abstracted visuals of U2 3D suggest a sincere attempt to visually represent the inclusiveness Bono and company are aiming for with their music, to bring people together, to "coexist"; that kind of ambition is not something you can say for a lot of 3D movies.

Whether any new enterprising artist, however, will take up the challenge of making serious art out of a technology that has been exploited mostly for spectacle remains to be seen.

Side note: having to wear 3D glasses on top of my usual glasses wasn't exactly the most pleasant experience either---maybe the final push for me to switch to contacts?

For those interested in what the glasses look like, a few pics below (all courtesy of Photo Booth---very sophisticated, I know). 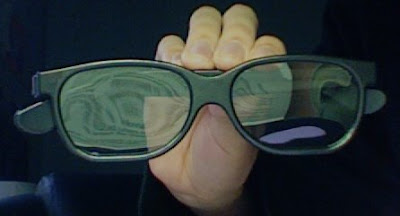 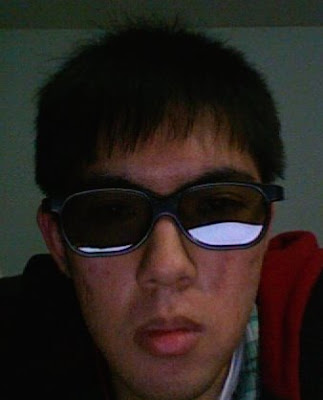 There's not much about my Wall Street Journal job that I feel particularly compelled to report; it's same-old, same-old, really (although don't take that as necessarily a complaint; I like stasis once in a while). I did finally qualify for health benefits from Dow Jones, though---after six months of work, I officially became a part-time regular employee at the end of February, and thus I was allowed health coverage. Power to all those who can live without health insurance for an extended period of time (like this film critic I read and admire), but, despite my artsy leanings, I do need a little bit of security in my life; I'm not so sure the starving-artist life is quite for me (although, as they say, you never know until you try...)

On an unrelated note: our dog Dusty has started to become trouble around the house. I mean, he never used to relieve himself indoors nearly as much as he's done in the past two weeks; now, it's come to the point that it's considered a good day for him if he can go the whole day without pissing on our floors once.

One of my younger brothers mentioned about a week ago that he knows a friend who had a dog who started having these "accidents" just before he died. Uh-oh.