Look at Me, Ma! Belated Oscar Notes, Be Kind Rewind, Rats and Balloons

First things first: take a peek at my Chop Shop review at The House Next Door---and by all means, check the movie out and see if I gave it a
fair hearing. All in all, I'd say it's worth seeing, if it's playing anywhere near your area. 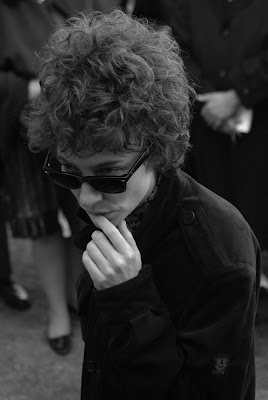 Okay, so some belated Oscar commentary---not that anyone really cares at that point, but I kinda want to get this off my chest, so I'll inflict it upon all of you whether you want to read it or not ;-) .

Here's a reprint of a portion of a comment I made on a Facebook group thread in partial response to Marion Cotillard's Best Actress upset at last Sunday's ceremony:

Nothing against Cate Blanchett, but to be honest, her Bob Dylan impression in I'm Not There left me cold overall---even her Katharine Hepburn characterization in The Aviator had more soul. Of course, one could argue that her performance in I'm Not There isn't supposed to be soulful---if there was a point to...Todd Haynes's movie, it's that Bob Dylan is pretty much unknowable. Still, just b/c Blanchett gets all the man's mannerisms down pat doesn't mean it's automatically great acting. Far from a stunning channeling act, I was pretty much aware all the time that it was Blanchett imitating Dylan, and I found myself only able to muster begrudging respect for her obvious technique.

Same with Marion Cotillard, who won the Best Actress prize for playing Edith Piaf in La Vie en Rose; I'm impressed by her dedication, and intellectually I can appreciate how her flamboyance and showboating fits the part of a singer who apparently couldn't help but turn every song into a flamboyant showstopper. And yet I couldn't help but always be aware of her ACTING. She sure acted up a storm---and got uglified and adopted a hunched walk to boot (not even Charlize Theron went quite that far in Monster, although she sure looked like a monster as Aileen Wuornos)---and got an Oscar for her trouble.

Is this kind of flashy, vain stunt performance really the kind of thing Oscar should consistently be awarding over indelible, humane characterizations from scratch (like Julie Christie's eloquent portrayal of an Alzheimer victim in Away From Her)?

I guess I'm reacting not so much to the quality of the performances themselves, because I can at least summon up a bedgruding admiration toward Cate Blanchett's drag act and Cotillard's over-the-top technique (and, in checking out some YouTube clips from the Haynes film, I'll concede that once in a while Blanchett does infuse some feeling to a part that perhaps is more notable for its lack of it). I guess I've just become mightily skeptical of this trend of showering these glorified, show-offy impersonations---indeed, falling in with media hype and celebrating them as "embodiments" when, more often than not, such performances are merely, cynically calculated to impress---over many more deserving performances that, you know, actually create characterizations from something like scratch.

I'm certainly not diminishing every single biopic lead performance by bringing this up---for every vanity act like Charlize Theron's Aileen Wuornos horror show or Philip Seymour Hoffman's condescending Truman Capote, there are genuinely remarkable channeling acts like Daniel Day-Lewis's defiant Christy Brown (from My Left Foot) or Joaquin Phoenix's underappreciated Johnny Cash interpretation in Walk the Line---but it's almost as if every high-profile biopic lead performance (other than, maybe, Kevin Spacey's Bobby Darin a few years ago) gets knee-jerk acclaim, whether or not the actor has actually managed to actually dig into the soul of the real-life figure he/she is playing. Oh, but he/she is actually trying to copy his/her subject's mannerisms and all down to the last detail---wow, that must be worth praising! Not so fast. For me, it's the difference between flash and heart---something that, to me, distinguishes a Cate Blanchett from a Julie Christie.

Good call on Tilda Swinton, who managed to humanize a cliché dragon-lady lawyer in Michael Clayton to the point that you almost had to feel a little sorry for her as she was being bullied by George Clooney at the climax. Well, at least I did. (Maybe I just have fucked-up sympathies.) Anyway, the way Swinton played her character, you could sense she was just trying to keep up in a man's world---a desire that led her to make some pretty reprehensible decisions. That's the kind of imagination that deserves acclaim.

Oh, and for those who haven't seen the wonderful little movie Once (the real little indie that could of last year, not the Fox Searchlight-backed Juno), let me set the record straight: for its Oscar-winning song "Falling Slowly," there is no soupy orchestration that goes along with it in the movie. None. Boy, that was a rather disappointing performance to watch---after that, even I would probably gag and dismiss it as trite emo crap. The magic of that first instance when the two main characters sit down in a music shop and play the tune---he on guitar, she on piano---comes from from its near-conspiratorial intimacy; it's two ordinary people having a wonderful private moment making music. Having sappy strings behind it totally ruins the effect. By all means, don't let that Oscar performance scare you off of a movie that rarely ever stoops to that kind of manipulative sentimentality.


And as for the Oscar ceremony itself---no, it wasn't particularly memorable or even all that exciting this year. But then I've never really watched it for the glamour. All that matters is that the show ran smoothly, host Jon Stewart had a few amusing jokes (at least after a rather lame opening monologue), and, most importantly, the Academy came up with a mostly respectable list of winners.

That's all I have to say about the Oscars this year. Time to focus on more important things (like the rise of Barack)?

By the way, for those who care: I didn't do too badly in my first-ever Wall Street Journal copy desk Oscar pool---sixth place. Damn you, Tilda and Cotillard, for tripping me up! 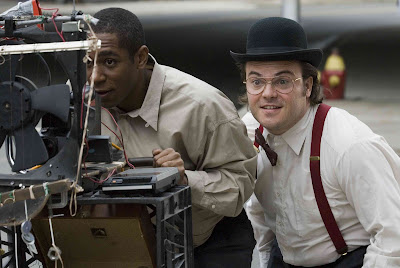 Some critics found the many touches of whimsy in Michel Gondry's previous film The Science of Sleep to be insufferably cutesy; me, I loved Gondry's handcrafted integrity as well as its descent into unexpectedly tragic territory in its final act, with its suggestions of self-criticism on the director's part. Live in the real world, Gondry seemed to be saying to his main character, instead of in your own self-absorbed, childlike head.

Judging from his new effort Be Kind Rewind, though, I can only wonder if he really meant what he suggested after all. Right at the outset, Be Kind Rewind clues you in that it takes place in some kind of Capraesque alternate universe---a self-contained fantasy world in which a VHS store still exists, one a couple of people around my age still frequent---and its first 30 hilarity-free minutes or so had me clutching my head from quirk overload. Jack Black's high-wire comic hipsterism can certainly be magnetic (witness High Fidelity and The School of Rock), but here I tired of his brain-addled schtick within his first two minutes onscreen. The endless gag revolving around Mos Def being unable to read letters backwards made me roll my eyes; and when this seemingly sincere guy---who wants to keep the VHS store in good condition for his practical, no-nonsense boss (Danny Glover)---somehow convinces himself to go along with Black's retarded plan to infiltrate a power plant that Black thinks is causing his headaches, I was ready to give this movie up as a fall into the deep end of suffocating preciousness for the usually more surefooted Gondry.

Once an accident at the power plant causes Black's head to become a magnetizer that leads all the tapes in the VHS store to be erased, however, Be Kind Rewind does become less exasperating. To please a longtime customer (Mia Farrow), Black and Def embark on a desperate, cockeyed plan to remake Ghostbusters in their own lo-fi image; the numerous Hollywood film parodies that flow forth from the unexpected popularity of their "Sweded" productions are genuinely cute and amusing. Eventually, though, copyright lawyers shut down the Sweding operation, the video store is threatened to be destroyed, and Gondry then lays the Capracorn on thick: the whole town unites to make their own movie, a faux biopic (oops, that word again!) of Fats Waller (a town cultural hero), and, even in the midst of the store's inevitable shutdown, the town rediscovers the magic and social solidarity of artistic creation. Gondry's vision is idealistic, nostalgic, and absolutely sincere; honestly, it's kinda sweet---and hard to gag on too much, because at least Gondry has enough real-world perspective not to throw in some last-minute twist that allows the store to stay open. Out with the old, in with the new---as long as we don't forget the old.

I can't bring myself to totally dislike Be Kind Rewind---as a movie fan myself, its celebration of DIY filmmaking and gentle satire of small-town celebrity is admittedly quite irresistible. (Its final five minutes are magical, it must be said.) But overall, the film can't help but strike me as a disappointment; The Science of Sleep---not to mention Eternal Sunshine of the Spotless Mind, although one might consider that more a Charlie Kaufman work than an all-out Gondry effort---was simply better realized, less evasively cutesy, and less sentimental. 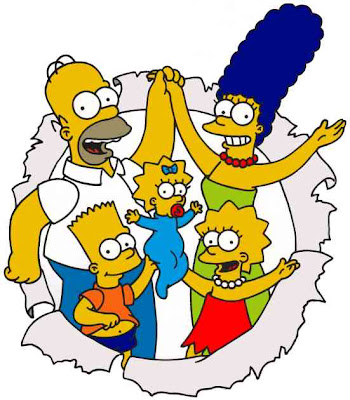 That was the final line of last night's episode of The Simpsons, and I laughed my ass off. Why, you may be asking?

Remember the mind-numbingly literal final shot of The Departed? The rat scurrying across the railing outside of Matt Damon's apartment? Last night's Simpsons episode---a takeoff of that Oscar-winning film---ended with a rat scurrying across the top of a gate, and then Ralph Wiggum popping up out of a garbage can, pointing to the rat and uttering that line above.

Truer words have never been spoken, I say!

The rest of the episode, by the way, was serviceable---it used both basic plot elements and one memorable music cue (the Dropkick Murphys "Shipping Up to Boston" rocker) from the film, but transplanted it to Springfield Elementary School, with a new kid (voiced by Topher Grace) infiltrating Bart Simpson's circle of friends to try to take him down for Principal Skinner---but that last line was utterly brilliant---worth sitting through the rest for. (Too bad there wasn't an equivalent of the Mark Wahlberg and Alec Baldwin characters, although one could argue that their characters in the film were already approaching parodies anyway.)

**********
Finally, a couple of stills from a classic film I finally saw a couple days ago, Albert Lamorisse's wonderful 1956 short The Red Balloon. It's in Technicolor, and just look at the glorious colors in these frame grabs: 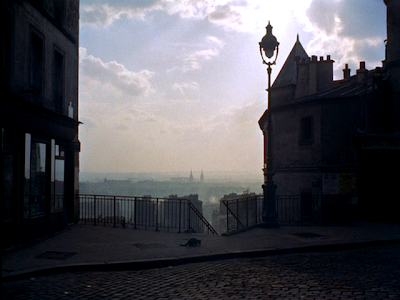 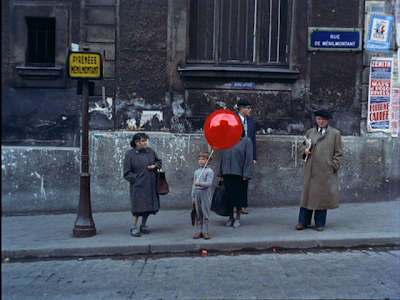 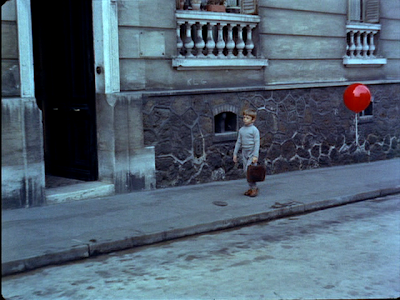 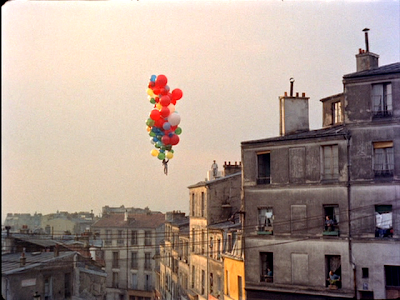 There's more to this film than its colors, of course; maybe in my next post I'll write something a bit more extensive about it. For now, though, just gawk at them if you've never seen them. Well, they made my Saturday, at least.
Posted by Kenji Fujishima at 3/03/2008 06:26:00 PM