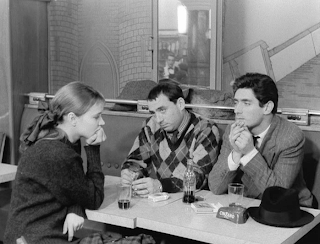 Yesterday I had perhaps the most memorable moviegoing experience of this year to date when I finally saw Band of Outsiders projected on a big screen at the IFC Center in New York. Jean-Luc Godard's 1964 film is among my top five favorite films ever, but my only exposure to it until yesterday was via DVD viewings on various-sized television displays. This weekend, however, IFC Center programmed it as part of a season-long series of French crime classics, and I figured, since I was planning to be in New York anyway to catch up with that French Oscar nominee A Prophet, I might as well take this opportunity to experience this film for the first time in a movie theater. Well, folks, Band of Outsiders not only still holds up as a masterpiece, but it's even more charming, poetic and affecting when its resolutely working-class trio, so full of romantic desires and mundane frustrations, is given the kind of larger-than-life projection they crave. Who knew that the film's final 20 minutes—as we witness Franz, Arthur and Odile's robbery plans fall disastrously apart—would not only be sad and unfortunate to watch, but also agonizing in its visceral impact? In short, it was truly a revelatory experience, making what I already knew was a great film seem even greater and more profound than I had even realized. After I left the IFC Center, I felt blissfully lightheaded, walking on air, with a big grin on my face. (You know that feeling, don't you? Treasure it whenever you can!)

Alas, that ecstasy was tempered by news of the 8.8-magnitude earthquake that hit Chile early yesterday, a natural disaster even more massive in scale than the earthquake that rocked Haiti weeks ago. This catastrophe, in fact, hit closer to home for me than the Haiti disaster did. A very good hometown friend of mine has been in Chile this past week as part of his graduate-school studies; naturally, when I heard on NPR that an earthquake had hit the country, I immediately started worrying about his well-being. Thankfully, I later found out, from both him and his girlfriend, that he was alive and well—but of course, that doesn't even begin to make up for the unimaginable loss of life that has surely resulted from this latest calamity.

You wouldn't think the earthquake in Chile had anything to do with Godard and Band of Outsiders, would you? But there's a small yet precious throwaway moment tucked into the film that, in its own way, brought me back momentarily into the real world. 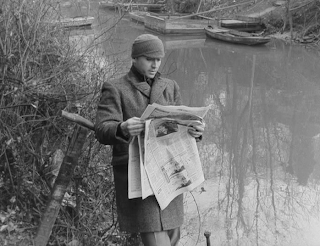 The moment comes as Franz (Claude Brasseur) and Arthur (Sami Frey) kill time as Odile (Anna Karina) stakes out her aunt's house for the money she says is secretly stashed there. At one point, Franz and Arthur are seen reading newspaper stories out loud to each other. They're having some fun with the "usual" extravagant crime reports, but then Arthur starts reading aloud a news item about massacres in Rwanda: "Hutus [sawing] off the legs of giant Tutsis, their former masters, to bring them down to size."

In this moment, and in many other instances peppered throughout the film, Godard pointedly injects real-world tragedy into an otherwise playful/melancholy work, implicitly wrenching these dreamers—and, by extension, us dreamers in the audience—out of their B-movie-inspired reveries. It momentarily wrenched me out of my own euphoria as well; in fact, seeing that scene play out again made me flash back to something I posted a few weeks back about the unease I felt with my admittedly rather distant reaction to the Haiti disaster. In that blog entry, I cited a moment from Godard's Pierrot le fou (1965) to help explain that detachment. Someone near and dear to me may have gotten caught in this latest natural disaster, but I still feel that same emotional distance, no matter that Chile's earthquake is even more serious in nature than Haiti's. And judging by the dispassionate way Arthur reads about "Rwanda's rivers" being "choked with the bodies of 20,000 victims," Godard seems to understand that distance all too well.

It'd be easier to just cut ourselves off from the tragedies that, let's face it, happen all the time around the world. But we are all a part of this world; in that way, then, we are arguably all responsible to at least be aware of what goes on in the world outside of our individual purview. Even in the movies, Godard lyrically suggests in Band of Outsiders, we cannot forget the occasional drudgeries and outright tragedies of real life; nor should we necessarily do so. For me, it's that real-world awareness is makes the film as gloriously enlivening and beautiful as it is.

I may have more to add about Band of Outsiders in a later post, but for now, my deepest thoughts and prayers are with all the victims in Chile right now. If anyone knows any way I can help, I'm all ears.
Posted by Kenji Fujishima at 2/28/2010 12:13:00 AM