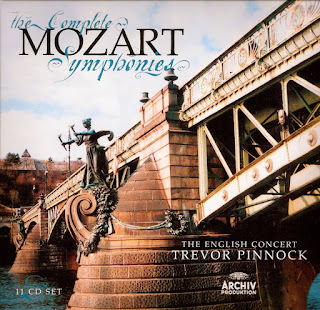 I just wanted to chime in briefly to plug a wonderful set of Mozart's complete symphonies I've been listening to recently. They're performed on period instruments by The English Concert under the direction of Trevor Pinnock, and they are available on a budget-priced 11-disc box set on Deutsche Grammophon's Archiv Produktion label.

I'm admittedly far from a connoisseur of period-instrument classical performances, but neither am I staunchly against listening to classical-era works performed this way, with special attention paid to the performance practices and instruments of the day. Certainly, there are interpretive insights that could conceivably be gained regarding a particular composer's work if situated within a sound world more authentically of his time. One of the common knocks against this kind of historically informed performance, however, is that some conductors focus so much on period authenticity—on the right instrumentation and sound, on tuning, on note values and tempos—that they lose the heart and soul of the music. Instead, so the arguments go, the music is often performed in a way that feels less like a living, breathing entity, and more like a museum exhibit.

Happily, that is not the case with Pinnock's complete cycle of Mozart symphonies, in which warmth and energy are in full supply even in Mozart's later, more widely performed masterpieces. There is plenty of fire in the quick movements (witness, for instance, the whirlwind finale of Mozart's Symphony No. 39), but Pinnock allows plenty of space in slow movements for Mozart's lyricism to fully blossom forth (sample the second-movement Andante cantabile of Mozart's "Jupiter" Symphony, his 41st and final utterance in the form). And the pleasures of the performances of the less familiar early symphonies—some of which already display moments of formal daring and youthful experimentation with matters of structure and sound—come mostly from listening to a crack authentic-instrument ensemble playing the music with the kind of utmost sensitivity and impeccable technical address that the best modern-instrument ensembles can provide.

Indeed, Pinnock's complete Mozart symphony cycle may well be as fine a choice for the first-time listener as any modern-instrument collection. Pinnock's performances may not necessarily be the last word in exploring the inexhaustible facets of these immortal scores—he's not what one would call an "interventionist" interpreter, generally preferring to let the music speak for itself—but never does historical performance practice take precedence over fine and often exhilarating music-making.

And, of course, if period instruments still turn you off...well, there's always Karl Böhm and the Berlin Philharmonic's pioneering vintage Deutsche Grammophon cycle from the '50s and '60s.

P.S. I've been exploring Mozart's music on-and-off for the past few months—his symphonies, his chamber music, his piano concertos, his serenades and divertimenti, etc.—and it still amazes me just how fresh and invigorating even his relatively trivial works remain after over 200 years. There's nothing at all dull or musty about these works, folks; the bright light of inspiration still shines. That said, I might as well also admit that there aren't very many Mozart works that I'd go out of my way to experience in a concert hall, especially since many of them have been so frequently played by various orchestras, amateur and professional, over the years. But then, I haven't yet gotten to his operas...or his Requiem...
Posted by Kenji Fujishima at 2/09/2010 11:15:00 PM