BROOKLYN, N.Y.—Guess who has finally joined the 21st century? 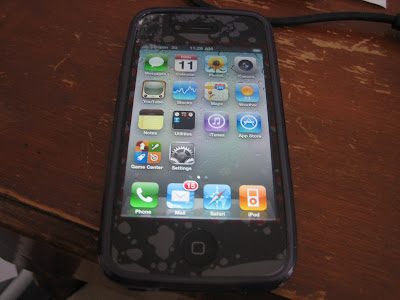 Thanks to Verizon finally carrying Apple's iPhone, I am now the proud (so far) owner of one of these gadgets—my first smartphone ever!

The first thing I did with my shiny new toy? Go all app crazy, downloading Twitter, Facebook and Foursquare apps, among others.

I'm on my way to becoming a social-media machine—just in time for South by Southwest next month! (Yes, I'm going, helping to cover the film and interactive components for The House Next Door.)

So if I ever get involved in some kind of bring-down-the-government revolutionary activity, I'll be ready to tweet/Facebook it on the go! (My hats off to all those in Egypt, by the way, because it looks as if all of your impassioned efforts—with a valuable assist from social media, so I hear—finally paid off today, despite yesterday's temporary bump in the road. Congratulations, Egyptians; I just hope the country doesn't go the way of Iran after the Islamic revolution in 1979.)

Now, the big questions. Does having an iPhone mean I'll be becoming one of those people: always looking at their phone rather than interacting with people? Worse, will I get sucked into, say, that whole Angry Birds craze and become one of those people playing games on their phone during long subway rides back and forth? I hope not...but one never knows, I suppose.
Posted by Kenji Fujishima at 2/11/2011 05:00:00 PM

Good stuff. First thing you need to do, though, is fix all of those bubbles on the screen.

Actually, those bubbles are the result of a display protector I bought at the Verizon store when I got the phone. Yeah, I know, it looks ugly...but for now, it'll do.

Hey Kenji! I recommend the "instagram" app! It's the best! You take photos and upload it. Pretty much like tumblr, except its supposedly your own pics.

Add me if you get on there! "Nnyish"!

I'll definitely look into it. Thanks, Jen!