BROOKLYN, N.Y.—Another year, another Valentine's Day. And once again, though this year finds me without an official valentine to call my own, as ever, I turn to my great (abstract) love, the cinema—specifically, the sensuous romanticism of that great visual poet of longing and heartbreak, Wong Kar-Wai.

After all those images I posted at my blog last year of characters in Chungking Express and Fallen Angels just staring into space and dreaming/yearning, this year, my Wong-geared thoughts turn to a particularly intoxicating moment of actual action in his summary epic 2046 (2004). It comes late in the film, as Chow Mo-wan (Tony Leung) says good-bye to the mysterious "Black Spider" (Gong Li) who also has the name of Su Li-zhen, the woman he loved and lost in Wong's previous film In the Mood for Love (2001). This second Su Li-zhen, much like Chow, carries a haunted past that she never reveals to him, but which Chow intuits based as much on his own personal experiences as from her actual elusive behavior. And Chow, ever the lady-killer that he is throughout the shifting chronology and layering of fantasy and reality in 2046, decides that maybe it's best to leave the second Su Li-zhen, lest he keep thinking of the first Su whenever he sees her.

What a send-off Chow gives her! Upon Su's urging...

...and instead of just holding her, as Su tells her to do, he boldly grabs her...

...and gives her the biggest, longest, most impassioned smooch ever shot on film:

The way Tony Leung just grabs Gong Li and goes for it, like that, kissing her like there really was no tomorrow? Man! The dude is my hero, just for that! (Not that Leung isn't hero-worthy for other reasons...)

And after Chow tells Su to get back in touch with him once she has finally escaped her past, we see Su's multifaceted reaction—first heartbroken, then more reflective:

The way Gong Li wipes that smeared lipstick off her lips, I rather wonder if Wong intended a subtle tribute to Jean-Paul Belmondo's famous lip-touching gesture in Jean-Luc Godard's Breathless (1960)... 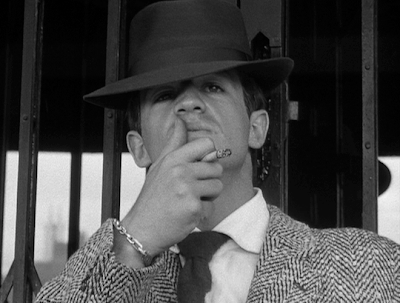 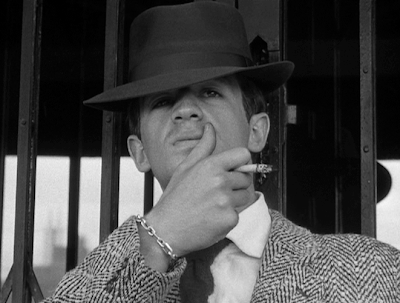 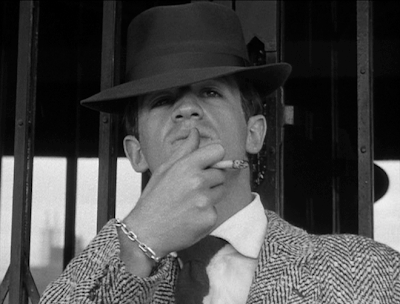 ...which, of course, Jean Seberg repeats at the very end, in a more ominous context: 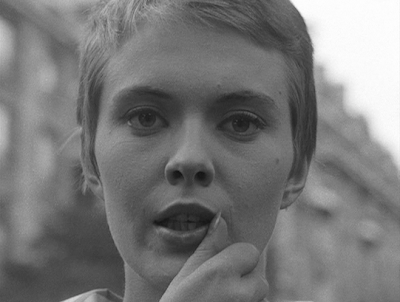 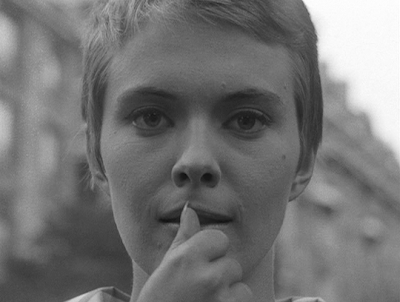 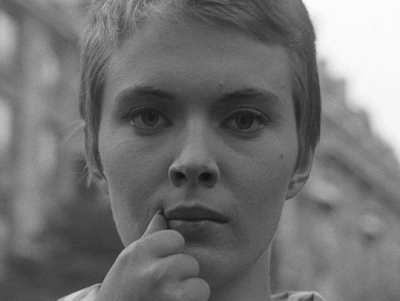 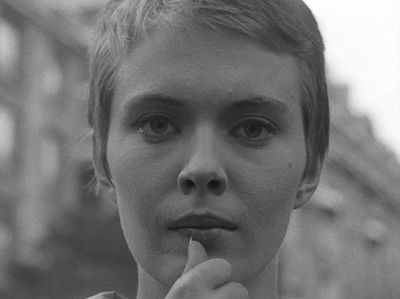 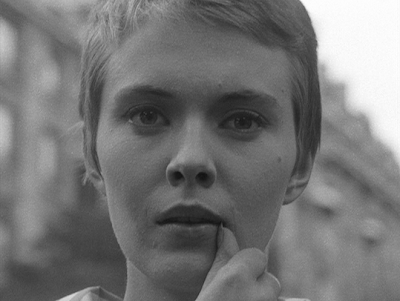 Or am I merely overlaying one romantic cinematic vision on top of another? As a single cinephile with traces of hopeless romanticism in his soul, I have a tendency to do that...especially on Valentine's Day.

But seriously, folks: Has anyone seen anything so sexy since...hell, since Barbara Stanwyck tousled the heck out of a stunned-into-sexual-submission Henry Fonda's hair in Preston Sturges's The Lady Eve (1941)? 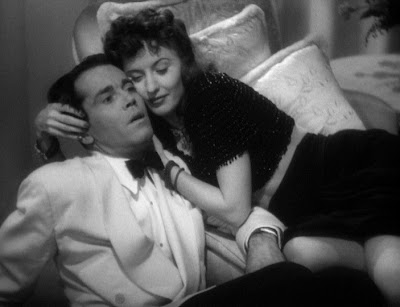 For all you lovebirds out there—attached, single or otherwise—enjoy your day of celebration!
Posted by Kenji Fujishima at 2/14/2011 08:00:00 AM

Seen "The Hand"? It's a short by WKW with Gong Li that shows why she wears the glove in 2046. Check it out if you haven't seen it, you won't be disappointed.

I have indeed seen "The Hand," and it is indeed terrific (easily the best in that omnibus Eros film, to my mind).

This blog entry is sheer genius and i love the frames of the best kiss ever recorded on a motion picture. bravo in seeinv the beauty in a movie alot of ppl will never understand -Ricki