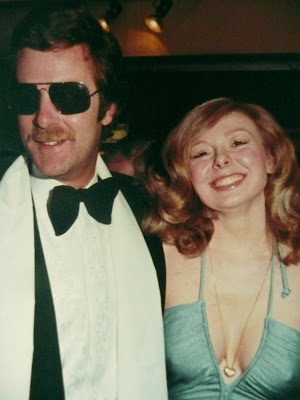 In tackling the notorious "case of the manacled Mormon" in his new film, veteran documentary filmmaker Errol Morris puts Joyce McKinney—the woman who made all the headlines in the British press when she, as they reported it, kidnapped a Mormon named Kirk Anderson, chained him to a bed and proceeded to rape him—in the front and center of his Interrotron to tell her side of the story. On the surface, this sounds like a strategy that should yield revelations about the human being behind the sensational headlines...and I suppose the gambit works, if only to reveal the woman at the center of this nutty sex scandal to herself be locked into some of her own illusions (delusions?) about Kirk, about love, about celebrity.

But man, what a force of personality McKinney is! She so thoroughly believes in her own take on events—that, for instance, Kirk Anderson fully consented to the sex they had during those three days—that she can't help but hypnotize us, perhaps in spite of our better judgment. (Perhaps her magnetism pulverized Morris, too, in a sense: Tabloid is notably free of his usual reenactments. Who needs 'em, with McKinney as vivid a storyteller as she is?) This is not to say that Morris is completely taken in by her story, as evidenced not only in the handful of other voices offered (two British tabloid reporters, a Mormon, a Korean doctor) but in Morris's visual approach, which not only embodies a tabloid-like aesthetic, but also uses that similarly sensationalistic style to occasionally undermine and contradict McKinney's story, going so far as to suggest underlying societal causes for the illusions she still harbors. (Did 1950s media present that idealized an image of romance, family life? It, at the very least, seems to be one that McKinney bought hook, line and sinker.) And yet, for this viewer at least, Morris generally stays on the right side of the empathy/condescension fence; he's too fascinated by this creature to make her a target for easy mockery (though that's not to say he doesn't sometimes find her funny).

So this is not a film in which one should expect the truth of what really happened in the so-called "Mormon sex in chains" affair to come out; after all, we do get only one side of the story, ultimately. And yet that inherently limited perspective is perhaps the point of Tabloid. If Morris intrepidly seeks the truth of a muddy situation in a film like The Thin Blue Line (1988), in Tabloid he is content to simply muddy the waters of what we think we know about a given situation and the parties involved. In the end, the truth, such as it is, remains stubbornly outside of Morris's grasp—and for such a lurid and outrageous story, that may be the most unsettling thing of all.
Posted by Kenji Fujishima at 9/02/2011 09:00:00 AM

I dunno, Kenji. Joyce's charm wore off pretty quickly with me, and I kind of resented that I had to stay in the same room with her until the film was over. Morris definitely seemed to condescend to her quite a lot from where I sat, and I find his ethics in exploiting her obvious mental illness questionable. This was an unpleasant movie, not unlike Crumb in the feeling it gave me.

You're not the only one I've talked to who had the same to Joyce McKinney and Tabloid, Marilyn. To each his/her own, I guess. I haven't seen Crumb, so I can't comment on that comparison.