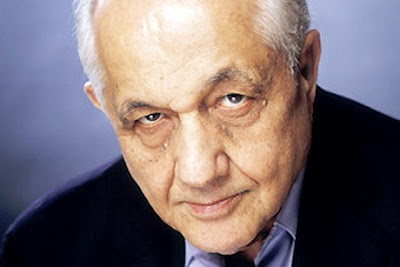 I would be remiss if I didn't acknowledge the passing last week of Andrew Sarris, one of the giants of film criticism. Among his many achievements, he introduced the auteur theory—previously only espoused by Jean-Luc Godard, François Truffaut and other French Cahiers du cinéma critics—to a wider audience, first with his essay "Notes on the Auteur Theory in 1962," then in his seminal 1968 book The American Cinema: Directors and Directions 1929-1968, in which he applied an auteurist way of thinking to American movies, and changed the way a generation of critics thought about film.

That said, I also admit that I find myself with little else to offer beyond that acknowledgment of his immense influence. I encountered The American Cinema fairly late, during college—years after I had already had my way of thinking about film rocked by Sarris's supposed ideological opponent (not really) Pauline Kael. It was Kael, not Sarris, who was my gateway to film criticism, so she will always have a fonder place in my heart than Sarris, to be honest. I say that, however, as merely a statement of fact, not as a way to elevate one critic over the other. To his eternal credit, Sarris was always treating cinema as a living, breathing thing, subject to reconsideration and revision if need be (for instance, he famously changed his mind on 2001: A Space Odyssey, albeit under the influence of drugs, after categorizing Stanley Kubrick as an example of "Strained Seriousness" in The American Cinema). For him, it was always about the films; such an attitude remains as valuable as ever these days

May he rest in peace and continue to be an inspiration to film critics everywhere.


***
I guess this week was just so packed with artistic consumption that I didn't have time to give each item in this log my usual extensive considerations. Nevertheless—and despite the fact that I'm a bit behind in a couple of writing assignments—I tried to give you all.


New York Asian Film Festival 2012:
Guns and Roses (2012, Ning Hao), seen at Walter Reade Theater in New York
★ Wu xia (2011, Peter Chan), seen at home in Brooklyn, N.Y.
★ Monsters Club (2011, Toshiaki Toyoda), seen at home in Brooklyn, N.Y.
Again, you can all look out for my forthcoming House Next Door preview piece for more about these films. By the way: I only discovered after the fact that the 114-minute version of Wu xia that I watched at home is not the same as the 98-minute U.S. version that, according to the Subway Cinema page for it, will be screening at the New York Asian Film Festival on July 9. I hope the 98-minute version doesn't diminish the longer version's considerable strengths.

★ Spaceballs (1987, Mel Brooks), seen at home in Brooklyn, N.Y. [second viewing]
This is for another future House Next Door piece, so you can all read my detailed thoughts on this film then. For now, I'll just say: I found myself laughing quite a lot this time around, even at a lot of its dumber jokes (a bunch of officers named "Asshole"? Really?). Maybe I was just in the right frame of mind for it at the time. (Who knows if that same mood might have led me to be far more charitable to the obnoxious Medieval Play, of which more below?)

BAMcinemaFest, all films seen at Brooklyn Academy of Music in Brooklyn, N.Y.:
★ Francine (2012, Brian M. Cassidy & Melanie Shatzky)
★ Gayby (2012, Jonathan Lisecki)
★ Welcome to Pine Hill (2012, Keith Miller)
★ The Unspeakable Act (2012, Dan Sallitt)
Though I wouldn't say that I know Dan Sallitt personally, I have met and conversed with him in person, we have crossed paths many times in New York cinephile circles, and I do know and admire his film criticism quite a bit. So feel free to take this with a grain of salt, but I think his newest film, The Unspeakable Act, is legitimately great, taking a potentially icky premise—the incestuous longing a teenage girl (the astonishing newcomer Tallie Medel) has for his older brother (Sky Hirschkron)—and mining it for sensitive coming-of-age drama instead of mere cheap titillation (don't worry, the girl never actually consummates that longing). The result is as emotionally rich and deeply poignant a cinematic experience as I've seen all year, in addition to being the best of the films I've seen so far at this year's BAMcinemaFest. If this was to get some kind of theatrical release within the next six months, this would surely rank high among my favorite films of the year; it's that good.
Music
★ Shostakovich: Symphonies Nos. 1 & 6 (1972/1965, Leonard Bernstein/New York Philharmonic)
Having acquainted myself with Shostakovich's Sixth Symphony a few weeks ago at that Cleveland Orchestra/Franz Welser-Möst concert at Carnegie Hall (which I wrote about in this previous artistic consumption log), I was curious to hear Leonard Bernstein's 1965 recording of the piece, considered one of the classic performances of the work. It is quite good indeed; his most notable interpretive touch arguably comes with the steady tempo he chooses for the second movement, adding a bit more heft to a movement that normally seems trivial coming after the long, tragic opening Largo. Bernstein's idiosyncratically neurotic reading of Shostakovich's First—which remains a startling musical statement for a first symphony—is also worth hearing.

★ Tidal (1996, Fiona Apple)
★ When the Pawn Hits the Conflicts He Thinks Like a King What He Knows Throws the Blows When He Goes to the Fight and He'll Win the Whole Thing 'Fore He Enters the Ring There's No Body to Batter When Your Mind Is Your Might So When You Go Solo, You Hold Your Own Hand and Remember That Depth Is the Greatest of Heights and If You Know Where You Stand, Then You Know Where to Land and If You Fall It Won't Matter, Cuz You'll Know That You're Right (1999, Fiona Apple)
No, I had not heard anything by Fiona Apple beyond "Criminal" before listening to these albums. Yes, I'm finally catching up with the musical output of singer-songwriter Fiona Apple on the occasion of the release of her latest album, The Idler Wheel Is Wiser Than the Driver of the Screw and Whipping Cords Will Serve You More Than Ropes Will Ever Do. Yes, I'm digging her stylistically adventurous and poignantly personal music so far.


Theater
Medieval Play (2012, Kenneth Lonergan)
This deliberately anachronistic burlesque on, among other things, the Great Papal Schism, period stage plays and the impossibility of moral awakenings in a backward society is about one-third witty and two-thirds irritating, with Kenneth Lonergan casting off his usual insight and sensitivity for a self-indulgent mess of gleefully sophomoric jokes and easy historical condescension. Its final, cynical twist of the satirical knife—suggesting the immorality on display has remained constant throughout history—admittedly carries a certain nasty charge, but considering the lowest-common-denominator pandering of its methods, it strikes me as one of those pot-calling-the-kettle-black scenarios. Well, Mr. Lonergan, at least there's always Margaret (getting a home-video release very soon, and well worth your time if you missed it in theaters—which, I imagine, would be most of you dear readers).
Posted by Kenji Fujishima at 6/25/2012 03:00:00 PM