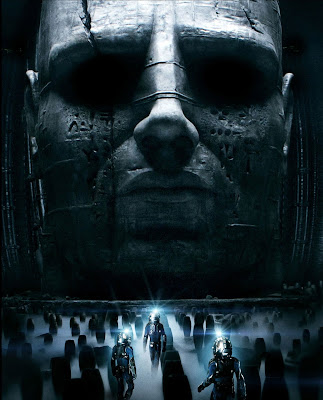 Neither fish nor fowl, Prometheus—the latest installment in the Alien franchise, and director Ridley Scott's return to the science-fiction genre since, well, Blade Runner 30 years ago—turns out to be more an intriguing mess than an outright failure: a film with visionary and intellectual pretensions that never really adds up to more than the sum of its sometimes amazing parts, but which nevertheless offers a surprising amount of food for thought to go along with its thrills, spills and chills.

Each film in the Alien series so far has offered something different thematically and stylistically from the film(s) coming before it; true to wide-ranging form, Prometheus announces itself right from the beginning as a film in a rather different mold than Scott's 1979 original (this new film is something of a prequel, if you hadn't heard by now). Unlike the ominous horror-movie atmospherics of Jerry Goldsmith's score setting the tone over the opening titles and dark, starry background, composer Marc Streitenfeld's opening-title cue for Prometheus emphasizes wonder and awe over Dariusz Wolski's images of a seemingly Earthly environment—a landscape in which a mysterious humanoid-looking being will ingest something that will somehow cause him to self-destruct, leading his disembodied parts to flow into the adjacent waterfall, creating a slew of molecular structures in a brief sequence that suggests Scott perhaps trying to beat Terrence Malick at his own Tree of Life game. 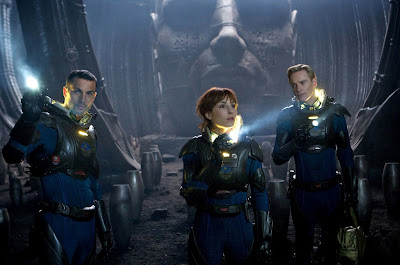 Wonder and awe turn out to be the essence of Prometheus, visually and thematically. This particular cast of characters is led by a scientist, Elizabeth Shaw (Noomi Rapace), who, along with her boyfriend Charlie Holloway (Logan Marshall-Green), recruit a bunch of Prometheus crew members—including, among many others, an android named David (Michael Fassbender) and a Weyland Corp. representative named Meredith Vickers (Charlize Theron)—to take them to LV-223, a moon that Shaw and Holloway believe may house secrets to uncovering the origin of life. Shaw wears a necklace in the shape of a Catholic cross, indicating a religious faith that underlies this quest; this is validated in the many heavy-handed lines of dialogue to that effect that Jon Spaihts and Damon Lindelof's screenplay include. She is, in essence, looking for God—and finds her faith severely tested when, basically, all Hell breaks looks on LV-223 and on Prometheus.

This attempt at a religious allegory is admirably ambitious on the face of it, especially in the context of a big-budget Hollywood blockbuster that is also a continuation of a lucrative studio franchise. Alas, the film ends up burying most of its interesting ideas under the weight of trying to also cater to audience expectations, both for summer-movie audiences and for Alien fans. Tantalizing spiritual and philosophical ideas wrestle with the expected special-effects fireworks; the frequent whiplash that results ends up frustrating more than illuminating. (Rarely has a sequel-setting final scene as the one that closes out Prometheus felt so forced and hollow.)

With Ridley Scott commandeering this ungainly jumble, Prometheus at least offers consistently impressive visual spectacle, and this film has at least two truly great sequences worth writing home about. There's a delirious suspense setpiece centered around a Caesarean-section abortion that recalls the icky "pleasure" of that famous chest-bursting showstopper in Alien; there's also one particularly memorable merging of genuine awe and splendid special effects surrounding a crucial discovery David makes—with the contents of an important star map literally whirling around him in the air, suggesting speculative thought in motion in a truly original way.

I'm tempted to fault Scott for once again proving himself to be more of slick, sometimes brilliant visualizer of a screenplay rather than a true visionary on the order of, say, Stanley Kubrick or Andrei Tarkovsky—but then, the screenplay is so much of a mess of underdeveloped notions and divided intentions that maybe it might have even defeated those two cinematic titans. A film that expends so much energy announcing that it's about the search of the origin of man and the existence of God demands a more focused, introspective treatment than what it gets here. (If this film had had no ties to the Alien series at all, this may well have been close to a genre masterpiece.) Prometheus, in the end, feels more like a missed opportunity than anything else; still, much like the Greek mythological figure with whom the film shares its title, it's impressive in its reach—intermittently, at least—even if that reach ultimately exceeds its grasp big-time.
Posted by Kenji Fujishima at 6/08/2012 10:30:00 AM