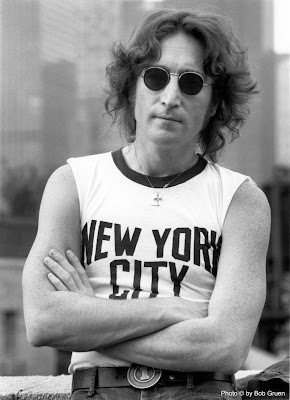 Despite the fact that I found myself having little to say about LennonNYC (2010)—Michael Epstein's documentary about rock icon John Lennon's years in the U.S. during the 1970s—I still tried to say something about it in my recent House Next Door dispatch. It's basically hagiography, but on that level I admit I wasn't entirely unmoved. (If nothing else, it gave me some motivation to finally listen to some of Lennon's apparently hit-or-miss solo work, especially his final complete album Double Fantasy.)

This is scheduled to air on PBS on Nov. 22. Frankly, the film's conventional Ken Burns-like talking-heads style is perfectly suited for the small screen; I say, you could probably skip paying $20 to see it at Alice Tully Hall and just wait for it to appear on your HDTV.
Posted by Kenji Fujishima at 9/23/2010 02:45:00 PM