Out of the Past, and Into the Present: Scott Pilgrim and Life During Wartime

EAST BRUNSWICK, N.J.—I was originally going to post a dual review of Edgar Wright's Scott Pilgrim vs. the World (2010) and Todd Solondz's Life During Wartime (2009) just before I headed out with my family to Yellowstone/Grand Teton. But the review took longer than I hoped, and I decided against working on it during my vacation—'cause, you know, it's a vacation after all.

Now that I'm back, I figured I might as well finish it, even if the immediacy of responding to Scott Pilgrim right after its release is inevitably gone. Because, believe it or not, these two very different films have at least one common thread worth elaborating on. Wright's film is a bright young-adult comedy, adapted from Bryan Lee O'Malley's graphic novel, that renders its title character's romantic travails in a flashily postmodern visual style that can quite possibly be described as a deliberately overscaled media mashup. Solondz's pitch-black comedy/drama, however, dispenses with overt stylization—save for cinematographer Ed Lachman's ironic deployment of bright pastel colors—and revisits characters from his earlier Happiness (1998), unflinchingly explores the pain and regret of those characters years down the road.

In matters of plot and style, there's little to connect them...except, that is, for this theme of ghosts—literal ones, in the case of Life During Wartime—of our past festering, persisting, coming back to haunt us in the present.

Scott Pilgrim (Michael Cera) begins Wright's film in the throes of fallout from a painful break-up with Envy Adams (Brie Larson), who is now a major pop star; he's carrying on a kind of rebound relationship with 17-year-old schoolgirl Knives Chau (Ellen Wong). At a party, however, he glimpses and then pursues the tantalizingly elusive Ramona Flowers (Mary Elizabeth Winstead)—only to discover that Ramona herself has some baggage from her past in the form of "seven evil exes," all of whom Ramona has moved to Toronto in order to escape, all of whom come back to haunt her and Scott, all of whom Scott is forced to fight in order to have Ramona all for himself.

To his credit, Wright doesn't allow his consistently, deliriously inventive style—fights shot like video-game/Japanese anime mash-ups; edits that collapse space and time; even a seemingly unremarkable sequence that plays like a sitcom scene, complete with laugh track and Seinfeld bumper-music cue—to completely obscure a palpable strain of regret that suffuses parts of the film. For all its pop-art multimedia spectacle, Scott Pilgrim, at its most visually unhinged, remains grounded in Wright's affection for both the media-savvy visual tropes and for his characters.

But does Wright possibly have too much affection for Scott Pilgrim and his media-saturated consciousness? Cera—following his attempt earlier this year in Youth in Revolt to play at least somewhat against his typical fey image—doesn't shy away from showing Scott's self-absorbed and immature side, but as the film progresses, one might begin to wonder if perhaps Wright is, however unintentionally, coddling his main character's self-absorption through his visual style, enshrining it rather than maintaining a necessary distance from it for the film's supposedly redemptive conclusion to come off. As it is, though, the film ends in a manner that makes its main character's arc from neediness to "self-respect" seem rather disingenuous. Maybe Wright got so wrapped up in creating his singular cinematic world that he eventually lost track of the real people populating it. 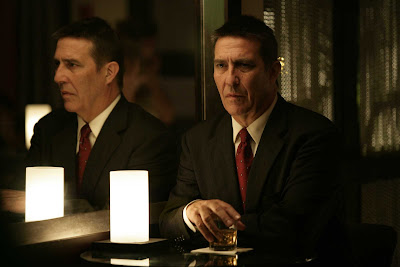 Todd Solondz—that ever-unsparing satirist of passive-aggressiveness, perversity and hypocrisy—is not the kind of artist to enshrine anyone's self-absorption, and when he's on top of his game, his wounding satire is laced with real compassion. Life During Wartime features many of the same characters from Happiness, but where in that film Solondz threw all sorts of "shocking" material at us and wrapped it all in a cruelly ironic and endlessly condescending freakshow, in his latest film Solondz looks beyond his own resentment and dares to wonder whether people like child molester Bill Maplewood (here played, in surely one of the finest performances you'll see all year, by Ciarán Hinds) can ever be forgiven for their previous transgressions, or even if they deserve to be. In Life During Wartime, Maplewood—recently released from prison, and feeling out of place in a totally changed, post-9/11 world—seems unable to even forgive himself.

Once again, as in Happiness, the focus is mostly on a trio of sisters. Joy (Shirley Henderson), in the film's opening scene discovers her husband, Allen (Michael Kenneth Williams, taking up the role Philip Seymour Hoffman played in the earlier film), is still engaging in the kind of sexual perversity that he's been struggling to overcome; upon discovering, she decides to flee from the marriage, visiting her sister Trish (Alison Janney) in Florida and Helen (Ally Sheedy) in Hollywood. And yet her guilt and inner turmoil cling to her, especially as she is also haunted by the ghost of Andy (Paul Reubens), who has apparently killed himself after their brutal break-up in the opening scene of Happiness.

Trish herself is trying to run away from traumatic memories of her husband, the aforementioned Bill Maplewood, with the help of a new boyfriend, Harvey (Michael Lerner), who, she says to him with delight, is "so...normal!" And Helen—who, tellingly, takes up far less screen time than Trish or Joy—has fled the difficulties of becoming a successful writer to sell out to Hollywood luxury as a screenwriter. (Helen's anguished speech in which she lashes out against how hard it is on her that people find her "cruel and condescending"—dialogue which recalls Solondz's self-defensive posture in his 2001 film Storytelling—is the one unfortunate moment that recalls Solondz's old Happiness-style contempt.)

All three of them are trying to move on from troubled pasts, but eventually...well, it's not so much that their pasts catch up to them, but that their pasts simply refuse to go away, as they may hope it would. As with Ramona's seven evil exes in Scott Pilgrim, the past, both Wright and Solondz suggest, will always hang over us, whether we want it to or not. That's a fact of life, and the only way to deal with it is to truly face it, head-on—which Solondz does in Life During Wartime even when some of his characters either refuse or are afraid to do so. Because what is it worth to "forgive and forget"—a mantra which is repeated quite often in this film, often skewed in a critical context—if the act of forgiving and forgetting is simply done in a de rigueur fashion, not sincerely from one's heart?

Unlike Wright in his ebullient consideration of the ways people deal with their past, Solondz keeps just enough of a distance from his characters to be able to both empathize and condemn in equal measure. In other words, he doesn't make it easy for us to rush into quick judgments. The result is a film that reaches discomfitingly funny and deeply moving heights that the frenetically busy Scott Pilgrim is perhaps too emotionally stunted to approach.


***
And on that note: All of you enjoy yourselves this Labor Day weekend, and try not to do anything you'll regret later!

Frequently forgiving ones self is the hardest task, both in plots and in life. It's a frequent theme, as in "Stray Dog," which I just happened to watch this past week.