BROOKLYN, N.Y.—Before I start waxing rhapsodically on my latest musical discoveries, a bit of housekeeping: Yes, I've dropped "Weekly" from what I once envisioned as a weekly feature on this blog before, well, life—my big move, the New York Film Festival, and other matters of work and play—got in the way. Now that I feel more settled in, I've been getting back into my music-listening habits...but, with the same newfound sense of freedom I feel in my life, so I feel a similar newfound sense of freedom in my blogging. Thus, I don't feel a need to discuss my musical discoveries on a weekly basis—just when I feel like sharing my discoveries with the world. (That, and "Whenever-I-Feel-Like-It Musical Discoveries" sure sounds unwieldy, doesn't it?)

Rest assured, though: I am still trying to discover music both old and new on my rides to and from work...and even with a shorter commute, surprisingly enough, I still find myself able to get through whole albums uninterrupted during a ride. Usually, though, this means keeping my earbuds on even as I walk the streets; that's something I once swore I would never do...but then, there was once a time when I swore I would never use an iPod, and now look at where I am with that. In the quest to expand my musical horizons on the go, resistance to such resolutions is futile, it seems.

My recent musical explorations have finally led me to this... 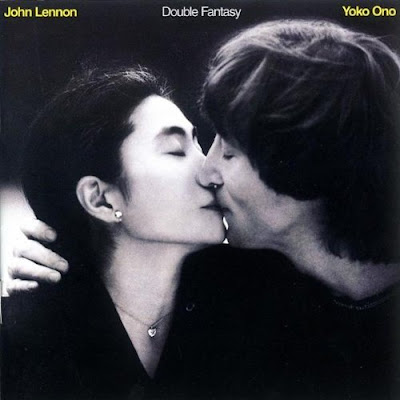 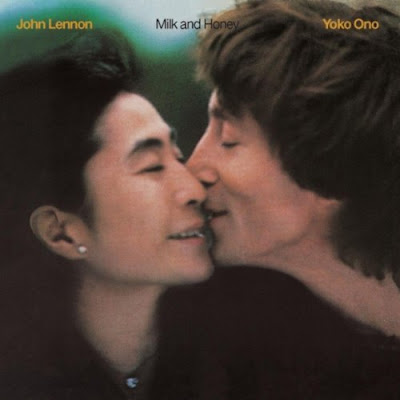 I may not have liked Michael Epstein's documentary LennonNYC all that much when it premiered at this year's New York Film Festival (you can read my thoughts on it here), but there were parts of the film that nevertheless managed to sneak past my critical defenses and move me—its section regarding Double Fantasy, Lennon's final (1980) album and a collaboration with wife Yoko Ono, chief among them.

Part of this had to do with my previous lack of familiarity with Lennon's years leading up to the making of the album: how he went through his 18-month "lost weekend" separation from Yoko, and how, as Epstein's film depicts it, they both eventually agreed to put the past behind them and ended up finding a sense of domestic bliss together after their second son, Sean, was born. Double Fantasy, then, was intended as an expression of a sense of peace with both the world and each other—and as aesthetically boring as the film was, I'll be damned if hearing some of the more famous cuts from the album ("(Just Like) Starting Over," "Watching the Wheels," "Woman"...heck, even Ono's "Kiss Kiss Kiss") set to montages of home-video footage and still photographs of their home lives didn't affect me emotionally. I remember realizing, while watching this portion of the film, that I hadn't actually listened to Double Fantasy all the way through; I found myself wanting to do so immediately, having heard some of those hit songs on the radio many times in my youth but never fully appreciating, well, how lovely those tunes actually were.

So my reaction to listening to Double Fantasy complete for the first time probably stems as much from my awareness of the album's background as by the quality of the music itself. Thus, I am not bothered one whit by the way Ono's experimental contributions alternate with Lennon's more traditional pop; I guess I'm perfectly willing to buy into Epstein's contention that Lennon choose to sequence the album this way in order to shine a brighter light on his wife's music. (Besides, I don't dislike Ono's contributions—though I think she wrote better songs for the posthumously released follow-up, Milk and Honey, which I'll mention anon.)

I would like to think, though, that you don't have to be aware of Lennon's personal life at the time of the making of this album in order to be moved by the profound sense of personal stability that pervades much of Double Fantasy. Lennon's songwriting here suggests a freedom that comes to an artist when he feels like he has nothing left to prove; this is possibly his most explicitly confessional batch of songs since Plastic Ono Band, his first (and in some ways, still his best) official post-Beatles album (1970)—except that, instead of naked angst and self-examination, Lennon provides serenity and inner peace. (The album's fifth cut, "I'm Losing You," may be the closest Lennon comes to anguish, and even then it's a low-key sort of anguish, almost an acceptance of the kind of marital fear that is simply part of life.) The Lennon cuts of Double Fantasy feel almost autumnal; the more energetically inventive Ono cuts, then, offer a bracingly youthful contrast. It's youth and aging wisdom in the space of a single album.

But then, it's quite possible that I myself—even as the supposedly young age of 24—have gotten to the point where I can somewhat identify with the album's "settled-down" feeling. Not that I've even come close to thinking about settling down with a wife and family yet, by any means; I still feel like I'm at a fairly tenuous and unsure time in my life, with endless possibilities in front of me and barely a grasp on which direction to go. But I see many friends in my age group getting married—some of them the type of people that I would never imagine settling down so soon after college—and I admit, I sometimes find myself craving the sense of solidity that a marriage symbolizes. (This is probably my roundabout way of saying that I'd like to have a girlfriend...but let's not dwell on that for the moment.)

Perhaps that's why the song I keep coming back to in Double Fantasy is "Watching the Wheels," as it beautifully evokes the feeling that, for Lennon, life has finally come to the point that he can find his own kind of pleasure simply by sitting back and relaxing, with barely a care in the world—and, in Lennon's case, without having to worry about living up to his rock-god status in any way. As personal as his lyrics seem, the implications are universal: Life can be such a whirlwind that sometimes you just have to drop out for a bit and regroup.

Besides, when you hear the devil-may-care laugh in Lennon's voice when he sings "I tell them there's no hurry / I'm just sitting here doing time"—right there you can tell that this is the sound of a man at some kind of peace with himself.

In case you've somehow never heard this wonderful song before:

***
Double Fantasy was meant to be one of two albums of Lennon/Ono material; some of the material for that second album was eventually released in 1984 as Milk and Honey, which sequences the songs the same way as its predecessor. The Lennon cuts are essentially sonic rough drafts; the source of the album's penultimate track, "Grow Old With Me," is apparently a cassette tape from Lennon's personal archives, and it sure sounds like it. But don't write this album off as merely a bunch of outtakes; in some ways, this is a more interesting collection of songs than Double Fantasy. For one thing, as I mentioned before, Ono contributes stronger material in this one; she gets the last word this time with the touching "You're The One," for instance. Most importantly, though, Lennon's cuts bring some sharp curves to the domesticated image he presented in Double Fantasy: the opening track "I'm Stepping Out" is about breaking away temporarily from his home life; "I Don't Wanna Face It" harks back to the self-examination of Plastic Ono Band ("You wanna save humanity / But it's people that you just can't stand"); and "Borrowed Time" is a Caribbean-styled meditation on the insecurities that come with aging ("Now I am older / The more that I see the less that I know for sure").

I see that I've devoted one mere paragraph to Milk and Honey; I don't want to give the impression that I value it any less than Double Fantasy, however. Maybe the best thing to do is to look at both albums as two halves of a great, unfinished double album—one that, in its own unassuming way, has a lot to say about ordinary human life, and does so in ways that are sometimes unabashedly sentimental but frequently heartrending. All I can do is echo Robert Christgau in his Milk and Honey capsule: "What a farewell."
Here's a music video, by the way, for "Nobody Told Me," from Milk and Honey:

P.S. To celebrate the 70th anniversary of Lennon's birth, EMI, with Ono's blessing  this year reissued his eight solo albums in digital remasters. For Double Fantasy, the company reissued the album in a remixed "Stripped Down" edition supervised by Ono and the album's original producer, Jack Douglas. As Ono has said about this new version, it "allows us to focus our attention on John’s amazing vocals. Technology has advanced so much that, conversely, I wanted to use new techniques to really frame these amazing songs and John's voice as simply as possible." I haven't heard this new version yet; maybe I'll get around to it eventually, though even with the studio tinkering of the original, I think the tender qualities of Lennon's vocals still shine through.