Tchaikovsky: The Man and His Musical Dreams 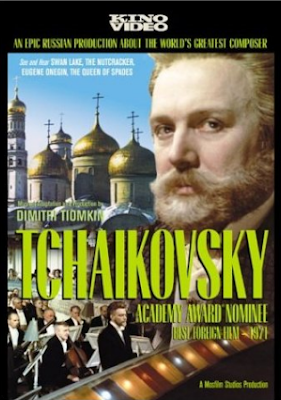 On this day, in 1893, the great Russian composer Piotr Ilyich Tchaikovsky died under circumstances that continue to be a bit of a mystery today (cholera or suicide?). To commemorate the 117th anniversary of his death, I took a look at Tchaikovsky, a Russian biopic from 1969, and wrote about it for Fandor, a new paid-subscription film site that looks poised to possibly give the by-now-well-established MUBI a run for its money.

It is, in many ways, not a particularly good movie; it's fairly worthless as biography, for instance, scrubbing away much of the man's more troubling aspects (his suppressed homosexuality, for one thing) in order to present what feels overwhelmingly like a squeaky clean, government-approved official history of one of its most famous artists. Nevertheless, it has its isolated moments of visual and aural interest, and not even Dmitri Tiomkin's enthusiastic rearrangements of Tchaikovsky's music can kill its impact.

If you're a Fandor subscriber, you can watch it on the site. Otherwise, it is available on Kino DVD.

In the meantime: How about a concert clip? Leonard Bernstein (yes, him again, 'cause I love him so) conducting the New York Philharmonic in the third movement of Tchaikovsky's Pathétique Symphony, which premiered nine days before he died: