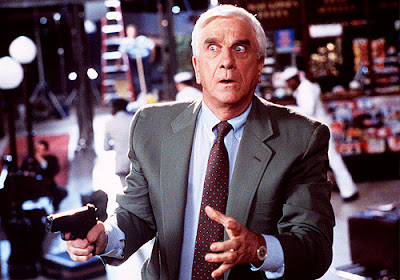 To commemorate the death of Leslie Nielsen (from pneumonia complications), the Huffington Post put up this post today recounting some of the more memorable lines uttered by the great comedian/actor from three of his most famous films, Airplane! (1980), The Naked Gun: From the Files of Police Squad! (1988) and The Naked Gun 2½: The Smell of Fear (1991). Here's the thing, though: None of those lines, as far as I know, were actually written by Nielsen. Others wrote them, and, simply reading them on the page and divorced from context, one might find some of those punchlines, in and of themselves, breathtaking in their cheesiness rather than their wit. Nielsen, however, with his flawless deadpan, made those lines work every single time; even when playing a bumbling Clouseau-esque fool like Frank Drebin in the Naked Gun movies, he never, ever let on that he was in on the joke. He didn't need straight men; in those films, he was his own straight man. Maybe his decades preceding Airplane! basically playing actual straight men in films like Forbidden Planet (1956) and The Poseidon Adventure (1972) gave him the resources to apply that same stalwart quality to his comedic performances.

For a more thorough appreciation of Nielsen's career here, I direct you all to Edward Copeland's fine remembrance at his blog here. In the meantime, I'll just note that, in addition to the kinds of B-grade horror flicks I referred to previously, I grew up on the kind of laffaminit spoofs that Nielsen often appeared in during his late-career comedic renaissance. Seeing Naked Gun 33 1/3: The Final Insult (1994) on television (the rare instance, by the way, in which the network-TV version actually included more footage than its theatrical version) offered me my first glimpse of Nielsen, and I don't think I had laughed harder at any other movie comedy up to that point (Airplane! came soon after that). In that sense, he was an essential part of my formative cinephilia—even in lesser stuff like Repossessed (1990), Dracula: Dead and Loving It (1995) and Wrongfully Accused (1998). Even with those misfires, I thank him.

I was watching the miniseries "Backstairs at the White House" the other night. Nielsen plays the Chief Usher, Ike Hoover, who served under a number of presidents and who was a very serious dude. I couldn't help waiting for Nielsen to break character at some point and throw a pie at the president.

Haha. Well, one thing that was great about Nielsen—if he was directed well, at least—was that, even in the craziest of comedies, he played things so brilliantly straight that you could still imagine playing "serious dudes" in dramas. Which he apparently did in many roles before Airplane! essentially launched a second career for himself as a comedic actor.