BROOKLYN, N.Y.—Because I was back in East Brunswick on Friday and Saturday catching up with family and friends, my theatrical cinematic explorations this weekend were limited to two new releases, both of them pleasant—or, in the case of Danny Boyle's 127 Hours, pleasant with generous doses of agonizing—surprises. 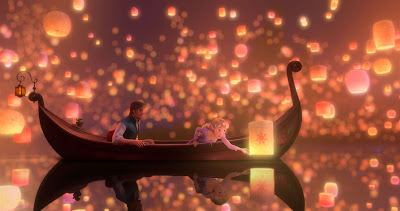 Tangled (2010), written by Dan Fogelman and directed by Nathan Greno and Bryan Howard, is Disney's 50th animated feature, and while the formulaic Disney elements are ever-present—cute animal sidekicks, buffoonish comic relief, a central love story—there's a refreshing sincerity that transcends the familiar outlines of this beautifully imagined world.

The film takes off from the famous Brothers Grimm fairy tale Rapunzel —she of the extra-long hair that she lets down for her deceitful "mother" so she can retain her youthful looks—and while its opening moments, featuring sarcastic voice-over narration from Flynn Rider (voiced by Zachary Levi, from TV's Chuck), suggest that this may turn into a Shrek-like smirkathon, Tangled eventually drops the sarcasm and becomes an emotionally stirring tale of a sheltered young woman (Mandy Moore) who takes her first few danger-fraught steps out in the "cruel," "wicked" world, as Mother Gothel (Donna Murphy) has raised Rapunzel to believe. Having wrestled with my own desires to break free from what I perceived to be a sheltered environment back home in East Brunswick, I found myself relating quite deeply to its scenes of Rapunzel escaping from her home prison and being hit by the same kind of awe that, say, Jake Sully felt while exploring Pandora in Avatar. It's that kind of openness to the natural world, as well as to life's highs and lows, that tends to animate my own views of life and art.

It certainly helps that Tangled features some of the most wondrous imagery seen in an animated Disney film in a long time; one sequence, in which Rapunzel and Flynn declare their love for each other on a river as a mass of lanterns float around them in the air, may be the most sheerly beautiful sequence I've seen in a theater all year (so much so that the forgettable blandness of the Alan Menken/Glenn Slater love ballad featured in the scene doesn't matter). Disney's latest film may not feel like an instant modern animated classic on the order of, say, most Pixar features, The Lion King or Beauty and the Beast, but it still resonates with the same emotional purity as some of the best children's animation in recent years. 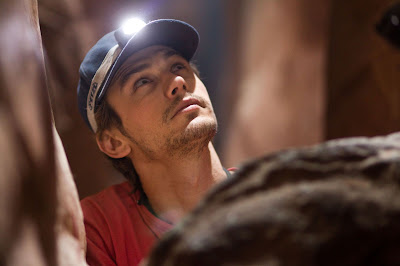 127 Hours (2010) is not an animated film, but, considering how much visual trickery director Danny Boyle pumps into this based-on-a-true-story account of Aron Ralston's (James Franco) ordeal after he falls down a crevice in a Utah canyon and gets his right arm stuck in a rock for about six days, it might as well be. Actually, that's not entirely fair to the film, which, against all odds, works both because and in spite of Boyle's usual slickness.

Here, Boyle's canted camera angles, restless jump-cutting, split screens and pixelated shots are put in service of trying to get inside the head of Ralston, who is presented in this film—adapted by Boyle and Simon Beaufoy from Ralston's own published account of the incident—as an adventurous, reckless and lonely all-American soul who ends up reassessing his own life as he's trapped literally between a rock and a hard place. In the opening stages, Boyle's impulsive, restless visual style makes sense for such an impulsive, restless fellow; once Ralston gets his arm trapped under that fateful rock, though, it's more hit-or-miss. Boyle has never been what one would consider a spiritual filmmaker, so his attempts to render the existential side of Ralston's crisis usually fall flat; his jittery style completely mucks up a climactic dream sequence that supposedly instills in him the push he needs to finally go through with his self-amputation.

Still, there are other scenes in which his style successfully elucidates the sensation of a given moment. In one sequence, Ralston, still trapped, films himself pretending to be on a talk show, and Boyle simulates his mindset by cutting quickly between camera angles and even adding a laugh track to the soundtrack. But then, Ralston reaches a moment of personal epiphany, and as he drops the ruse, Boyle likewise drops the laugh track and multiple camera angles, wisely leaving us with Franco's regret and sadness to carry the rest of the scene.

If the film manages to be as affecting as it is, it's mostly because of Franco, whose magnetic performance fills in the film's spiritual holes. When, after his physical/mental trial is over, he quietly whispers "Thank you" to the rock and his cut-off arm—after having photographed the gory image, no less—the moment is remarkable for Franco's sense of peace in his delivery, as if the whole agonizing experience has purified him in a way. Sure, a less flashy director than Boyle would probably have made more out of the existential man-versus-nature themes this film lightly touches on...but somehow, the inspiring nature of this story still communicates quite movingly. Even after suffering through what most of us would consider six days of Hell, Aron Ralston still managed to retain both his derring-do spirit and his awe of the natural world. (Apparently, the real Ralston is still climbing rocks and mountains, even with only one arm.) That's real human resilience, folks—and, at its best, 127 Hours exudes that same exuberant sense of life even as the film deals with the effects of a character who teeters on the brink of death.
Posted by Kenji Fujishima at 11/29/2010 12:01:00 AM

I look forward to see 127 Hours since everyone is raving about it! Welcome to LAMB Kenji!

Well, not everyone's raving about it, technically (see this and this for dissenting opinions)...but yeah, I liked it overall, though I hesitate to call it great. If nothing else, it's worth seeing for James Franco's performance, which is indeed terrific. (I do like this more than I did Slumdog Millionaire though, for what it's worth.)