BROOKLYN, N.Y.—For the sake of completeness, allow me to get this out of the way first: As expected, seeing Die Hard (1988) on a big screen was totally awesome, with the reasonably sized crowd's palpable enthusiasm adding immeasurably to the experience. To wit, audience members cheered and applauded when Bruce Willis's name popped up in the opening credits, and did the same for Alan Rickman; later, they would react the same way when John McClane first unleashes his trademark "Yippee-kayyay, motherfucker" quip. Otherwise, the film itself took care of the rest; seeing it on a big screen reminded me of just how perfectly directed and rigorously constructed this film actually is, with barely a wasted shot or gesture in its headlong rush. Above all, though, Die Hard works because it actually bothers to create memorable, down-to-earth characters and skillfully weave those characterizations into the suspense. Certainly, none of the other films in the series dare to open the film with a relatively quiet 20 minutes of set-up, a stretch which plays more like a character drama than an action yarn. (I go further in outlining its many other virtues at this House Next Door piece from a few years ago here.)

The only sore point about this theatrical screening of Die Hard? The quality of the print screened was pretty mediocre—not unwatchable, but fairly beat-up, sometimes to the point of adding unintended suspense when the print's wear and tear ran most rampant. I assume, though, that this was the best print the theater could find. (Who knows? Maybe, 20-30 years down the road, Die Hard will be considered canonical enough that it'll be deemed worthy of a restoration that would screen at, say, Film Forum!) It sure wasn't enough to prevent me from being thrilled all over again by John McClane's first, and by far his best (despite all the crowing I've done about Renny Harlin's Die Hard 2 both on this blog and on my Twitter feed), cinematic adventure. 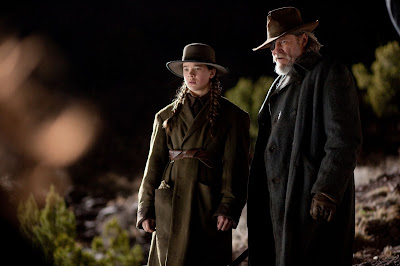 My other adventure in mainstream American cinema came courtesy of True Grit (2010), the latest film from the Coen Brothers, and arguably their most emotionally direct, with a concluding 10-minute stretch that ranks not only among one of the most memorable in the filmmakers' body of work, but one of the finest moments to come out of 2010 cinema.
From what I gather, having not read Charles Portis's novel nor seen Hollywood's first go at the source material—via Henry Hathaway's 1969 film with John Wayne's Oscar-winning turn as one-eyed bounty hunter Reuben "Rooster" Cogburn—the Coens retained much of Portis's arch dialogue in their screenplay and restored the focus to the revenge-driven 14-year-old Mattie Ross (Hailee Steinfeld, in a mightily impressive screen debut) rather than to blustery Cogburn (Jeff Bridges) himself. Much of the film is actually fairly talky, though with dialogue this juicy and with the actors clearly savoring the distinctive turns of phrase, it's difficult to complain too loudly about it. But what seems like an amiably poky genre exercise for much of its running time becomes something more with those aforementioned final 10 minutes, which not only sum up the film's main themes of compromised humanity and morality, but does so in such a lyrical, beautiful and poetic manner that it imbues the rest of the film with a retroactive heft. I won't spoil what happens here; simply put, True Grit reveals itself to be, among other things, a coming-of-age story in which its young female protagonist begins to understand—as people like her eventually must understand in the Coens' moral universe—just how complicated typical American notions of justice and heroism can be in the real world. 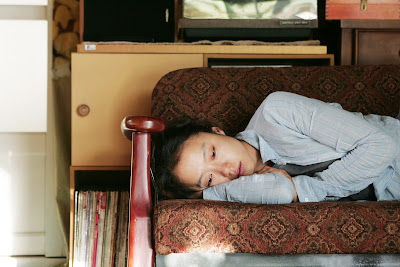 There is no justice either in the moral universe that South Korean filmmaker Lee Chang-dong paints in Secret Sunshine, his 2007 film that is only now getting a theatrical release here in the U.S. (Possible spoiler alert) After the kidnapping and subsequent death of her son in the town of Miryang, Shin-ae (Jeon Do-yeon) turns to religion as a way to deal with her overwhelming grief. But then, she decides to take it upon herself to go to prison and personally forgive her son's killer for his sins...only to then suffer a profound crisis of faith when she discovers the killer has already discovered God and feels that He has forgiven him already. Why would God pardon his sin before she does?, she begins to wonder. Is there even a God in the first place, watching and judging accordingly? She becomes increasingly reckless with expressing her disillusionment; in arguably the film's most potent image, the camera slowly zooms into Shin-ae's face from above, suggesting a God's-eye point-of-view, as she tempts Him with her sexual immorality.
Secret Sunshine is yet another film released this year—following Jessica Hausner's Lourdes (2009) and Bruno Dumont's Hadewijch (2009)—which tackles the question of God's existence by detailing how individual characters' belief in a Supreme Being manifests itself in their actions, and exploring the implications of those actions. Whether there definitively is a God out there is of passing interest at best to these filmmakers; they're more concerned with putting religious belief to the Job-like test. This strikes me as a refreshingly rational approach to questions that usually inspire heated emotional responses, and Lee's film is certainly laudable for its consistent intelligence and even-handedness.

If I ultimately can only work up a distant admiration for this film rather than full-on love, it probably has something to do with this feeling I got as the film went on that there's something a bit too overdetermined about Lee's storytelling style. Each scene makes its point tidily and economically, and certainly some of those individual scenes are fascinating to observe in and of themselves. But Lee's, well, God-like control over the story ends up being rather self-defeating; the film begins to feel less like a character study and more like an accumulation of carefully worked-out plot points. Secret Sunshine is sometimes affecting and rarely less than thought-provoking, to be sure; more often than not, though, it seems to take place in a vacuum, in which the messiness of real life isn't allowed to intrude lest it force Lee to stray from the grand storytelling plan he has mapped for his characters. (I don't remember his most recent film, Poetry—which I saw at this year's New York Film Festival, and which I reviewed on this blog here—feeling as overly scripted as this one.) Yes, Jeon Do-yeon is a force of nature, offering an unforgettable portrait of a woman in various stages of grief and anguish; but even she, for all her magnificence, can only do so much with a character that increasingly feels less like a flesh-and-blood human being, more like a predetermined slate on which its writer-director can thrust all of his thematic concerns. For all its admittedly neat (stage-bound?) plotting, even John Cameron Mitchell's Rabbit Hole—another recent portrait of parental grief with another exemplary lead female performance, this one from Nicole Kidman—felt less oppressively schematic, and more exploratory, than this.
Posted by Kenji Fujishima at 12/29/2010 07:30:00 AM