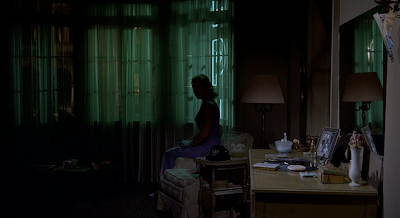 The dream in Vertigo—the dream of a love that leads to death, of a beautiful illusion that gives way to nothingness—is also a dream of the movies....More so than any other of [Alfred] Hitchcock's works (more so, I would say, than any other movie), Vertigo speaks of a passion for film, a passion that isn't always a healthy one. It's a love for the illusory and the ineffable that is also a love for the false, the bloodless, the empty.

Because recorded sound and the photographic image are direct impressions of reality, film is the most immediate and sensually enrapturing. But because those sounds and images are ultimately only a field of light and shadow, the movies are also the least material of art forms. You can't touch a movie in the way you can touch a book or painting; a reel of film is a mute, meaningless thing, articulate only when light and motion make it speak. In Vertigo, Hitchcock dramatizes the duality of the material and the intangible that is the inner mystery of the movies. It becomes a tale of sexuality and death, and the tragedy of the story springs directly from the tragic nature of the medium. On film, presence and absence, sex and death, are inseparable.

—Dave Kehr, from "Hitch's Riddle: On Five Rereleased Films," originally published in the May-June 1984 issue of Film Comment, republished in When Movies Mattered: Reviews from a Transformative Decade (2011)
A more eloquent summation of not only the everlasting appeal of Hitchcock's 1958 masterpiece, but of the cinema in general, is hard to imagine. What did the late film critic Robin Wood once say about Hitchcock's later Marnie (1964)? That "if you don't love Marnie, you don't love cinema"? I'd say the same for Vertigo, for sure; for me, at least, that film is the movies—as beautiful and disturbing a meditation on the allures and dangers of movies and moviegoing as has ever been made anywhere.
Posted by Kenji Fujishima at 6/06/2011 03:30:00 PM