Literary Interlude, "Putting Midnight in Paris in its Place" Edition

I rang for the waiter. He didn't come and I rang again and then went down the hallway to look for him. [F.] Scott [Fitzgerald] was lying with his eyes closed, breathing slowly and carefully and, with his waxy color and his perfect features, he looked like a little dead crusader. I was getting tired of the literary life, if this was the literary life that I was leading, and already I missed not working and I felt the death loneliness that comes at the end of every day that is wasted in your life. I was very tired of Scott and of this silly comedy, but I found the waiter and gave him money to buy a thermometer and a tube of aspirin, and ordered two citron pressés and two double whiskies. I tried to order a bottle of whisky but they would only sell it by the drink.

Inspired by Midnight in Paris, I'm currently reading Ernest Hemingway's A Moveable Feast, his posthumously published memoir of his own experiences living in Paris during the 1920s—exactly the era Gil (Owen Wilson) fantasizes about in Woody Allen's latest film. So far, for the most part, reading Hemingway's book—which, if memory serves, is a book for which Gil outwardly expresses an especial fondness—is adding to my growing pile of reservations about a film that admittedly had me in a state of bliss while I was watching it. 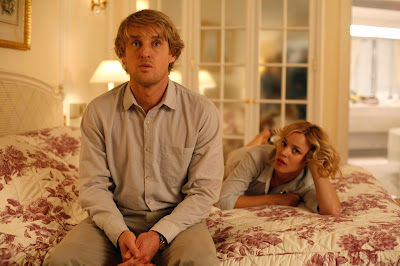 Many critics seem to swallowing the line—encouraged by Allen himself in certain crucial lines of dialogue he writes in the film—that Midnight in Paris is partly about the dangers of unchecked, unguarded nostalgia. But, as Jonathan Rosenbaum has astutely pointed out, and as a quick check of a dictionary confirms, "nostalgia" refers to a longing to go back to older times and places one has personally experienced. All Gil knows about Paris in the 1920s is through books like A Moveable Feast—and if my experience so far reading Hemingway's book is any indication, Gil clearly hasn't actually understood the book beyond what I imagine is a conflation of his own personal desires—to break out of his numbing ordinary lifestyle and try his hand at the starving-artist lifestyle—and the book's literary-celebrity-name-dropping surface.

Hemingway's own nostalgia is borne out of a deep well of personal experience, with some pleasant memories (skiing with his wife Hadley in Schrums during the winter, for instance) and some not-so-pleasant ones, like his recollection with a self-dramatizing F. Scott Fitzgerald reprinted at the beginning of this post. Above all, what comes through in A Moveable Feast is an artist looking back at his formative years honestly and without sentimentality: exulting in the joys of living in such an art-centric town such as Paris, but acknowledging the practical struggles that go into trying to maintain that lifestyle. It wasn't always easy, Hemingway suggests, but it was his own experience, and it helped form who he was as a person and as an artist.

Apparently, the only thing Gil has grasped from A Moveable Feast is that Hemingway hung out with a bunch of the artists he idolizes. For that reason, it's appropriate that his midnight sojourns into his private-fantasy Paris are full of sizzle and glamour—all of which is beautifully captured in Darius Khondji's lustrous cinematography—but (one or two hints of Zelda Fitzgerald's encroaching madness notwithstanding) are generally lacking in hints of the darker sides of these artistic giants that Hemingway himself elucidates so unsparingly. Compared to the soulless upper-class existence promised by Gil's shrewish fiancée Inez (Rachel McAdams) and his Tea Party Republican in-laws (Kurt Fuller and Mimi Kennedy), what aspiring writer wouldn't want to escape into such extravagant literary fantasies, and maybe even go further and try out the starving-artist-in-Paris lifestyle for a while, as Gil himself is clearly contemplating? 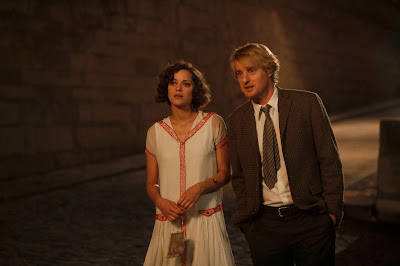 So what is one to make of the episode towards the end of the film in which Gil, still basking in his Paris-in-the-1920s fantasies, finds himself transported into the Paris-in-the-1890s fantasies of a fellow dreamer named Adriana (Marion Cotillard) and gives a speech in which he apparently now understands the way both he and she have been overly romanticizing the past, and how people in each generation will always yearn to live in a previous generation, when the hard truth is that no era is an ideal one, as much as we'd like to think otherwise? These are wise and bracing sentiments Woody Allen is expressing, sentiments with which I am inclined to agree (the Coen Brothers, of all people, were also getting at something similar in the contemplative last act of their adaptation of Cormac McCarthy's No Country for Old Men)—but does Allen truly believe them himself? To my mind, he doesn't show us nearly enough of the less savory aspects of Parisian life in the 1920s for Gil's sudden realization to be all that believable; it's just a notion Allen randomly throws in there (and Owen Wilson, to his credit, brilliantly delivers the speech as if he were coming up with these ideas on the spot) and then basically tosses away as Gil impulsively decides to end his engagement with Inez and ends up reconnecting with that cute French record vendor (Léa Seydoux) he briefly met earlier.

It's as if Allen is afraid to truly confront the harsh truths behind the illusions he so lovingly presents in Midnight in Paris—afraid to admit that maybe Inez has a point in belittling Gil's aspirations as nothing more than unrealistic delusions (Gil himself having not shown any particular literary talent up to this point). Maybe that's fitting, though, considering the fact that his last film, the undervalued You Will Meet a Tall Dark Stranger, ended with the rather biting suggestion that maybe we all need to hold onto our illusions to keep us going in life. Hemingway, I am sure, would have put both Gil and, by extension, Woody Allen in their places.
Posted by Kenji Fujishima at 6/28/2011 09:00:00 AM