BROOKLYN, N.Y.—This was a pretty damn good week for artistic consumption, I must say; there was not a disappointment in sight, by my lights. Plus, I squeezed in such fun non-artistic things as participating in a trivia competition; having a margarita in celebration of Cinco de Mayo on Saturday night; and impulsively deciding to wander around the historic—and utterly beautiful—Green-Wood Cemetery in Brooklyn until I decided to look for the gravestone of composer/maestro Leonard Bernstein, one of the many historical figures buried there. 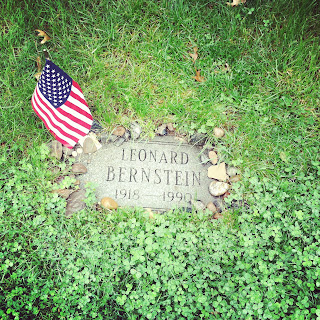 And while standing out in the cemetery during a misty, drizzly Saturday morning, I took out my iPhone, searched for the final track of Bernstein and the New York Philharmonic's 1987 Deutsche Grammophon recording of Mahler's Resurrection Symphony on Spotify, and blasted its heaven-storming last five minutes out loud—no, not through headphones/earbuds, but holding my phone in the air, in front of Bernstein's tombstone, for all the world to see/hear. I, for one, didn't care how weird I looked doing it; I felt good doing it, dammit!

★ F for Fake (1973, Orson Welles), seen at IFC Center in New York
That's right: I had never seen Welles's famous essay documentary at all until Tuesday evening as part of the weekly Stranger than Fiction documentary series at IFC Center. If anything, I found myself becoming more entranced by its purely formal qualities—its rapid-fire editing, its free-associational structure, and so on—than by its verbal ruminations on fiction, non-fiction, truth and art. Not that Welles's musings on those grand subjects aren't fascinating; maybe I just feel like I'm on the verge of burning out a bit on these kinds of movies-about-movies after last year's Hugo/The Artist-led glut (though Jacques Rivette's Celine and Julie Go Boating provided a glorious exception, as you will see later). But F for Fake is so brilliantly edited, and is held together so magnetically by Welles's ebullient prankish spirit, that, by the time Welles cleverly pulled the rug out from under the fabrications of the film's last 20 minutes, I found myself wholly delighted. That Welles! When it came to movie magic, he almost always put his money where his mouth was, even towards the end of his professional career.

★ Patience (After Sebald) (2011, Grant Gee), seen at Film Forum in New York
My review of this fascinating documentary/essay film went up yesterday at Slant Magazine; I'll link to it in a separate post. It opens at Film Forum on Wednesday, and it really is something to see, even if you're not too familiar with the work of German-born writer W. G. Sebald.

★ Bonjour Tristesse (1958, Otto Preminger), seen at Film Forum in New York
For me, Preminger's disquieting detachment is what makes this visually sumptuous adaptation of Françoise Sagan's melodramatic novella as powerful as it is—to the point that Jean Seberg's obvious limitations as an actress, to my mind, ultimately don't hinder my appreciation too much (though there's no escaping some of the awkwardness of some of her line readings, especially when she's called on to suggest more complex emotions). Its final shot—of Seberg's Cecile, fully realizing the dead end of the lifestyle she so ruthlessly fought to maintain the summer before, smearing cream while she begins to cry—is devastating in its impact.

★ Celine and Julie Go Boating (1974, Jacques Rivette), seen at Film Forum in New York
I didn't see this weekend's big mainstream box-office attraction, The Avengers (maybe I'll see it next weekend, though if I do, I'll be seeing without having seen either Thor, the recent Captain America or the recent Incredible Hulk), but I'd be surprised if I had half as much fun with Joss Whedon's Marvel-superhero extravaganza as I did seeing Rivette's three-hour meta-movie funhouse for the first time!

Admittedly, it took me a while to get on its wavelength. At the beginning, when Julie (Dominique Labourier) begins her pursuit of Celine (Juliet Berto) after Celine drops a piece of clothing from her bag, personally, all I could wonder was why Julie didn't bother to shout something like "Excuse me, ma'am" to get her attention. (The obvious answer to this is that if she did, this movie wouldn't exist—or maybe it would exist, but it might be less interesting.) And for about the ensuing hour or so, I wasn't sure how charming I was finding either Rivette's whimsical playfulness or the wildly eccentric behavior of the two lead characters. Frankly, parts of the first hour or so of Celine and Julie pushed my whimsy allergies the same way the recent Indonesian film Postcards from the Zoo did for its entire near-unendurable length.

At about the point, though, when we start to see Celine and Julie reacting to the events they individually experience at that mysterious house—as if they were audience members reacting to a movie they're watching—suddenly the movie started to snap into focus for me in ways that I began to find satisfying. And by the time Rivette gets to his amazing grand finale—Celine and Julie's attempt to rescue the girl from imminent doom in that house, an act that suggests two audience members entering into the entrancing fictional world that they've been wrapped up in for days—I had long given over to the film's sense of what-the-hell invention.

Lots of serious criticism has, I'm sure, been written about Celine and Julie Go Boating, and there's certainly much to say about it. Don't read any before seeing the film, though. Rivette's film, if you're able to share his sense of cinematic play, is an exhilarating and generous confection to bask in rather than to regard in hushed, somber tones. By the end, you may well be surprised how emotionally invested you are in the adventures of these two madwomen. This movie about the joy of watching movies is itself pure joy (no matter what Armond White says about the film and those who he believes pretend to like it for the sake of fulfilling supposed hipster credentials).

★ The Band (1969, The Band)
★ Stage Fright (1970, The Band)
Maybe I should feel a bit of shame that these days, it often takes the death of a musician to finally get me to listen to that musician's music. Such is yet again the case with Levon Helm, the drummer for The Band who died recently; I had always been curious to check out that famous group's music after hearing their Basement Tapes with Bob Dylan, but Helm's death finally got me in the mood to explore. Oh well; better late than never, right? At least I'm finding much enjoyment in The Band's music so far. Maybe I'm just a sucker for this kind of earthy Americana, even when that pleasantly folksy sound masks darker undertones, as it surely does with their third album, Stage Fright.

★ How to Get Started (1989, John Cage), performed at Symphony Space in New York
Back in 1989, during a conference in northern California, John Cage conceived of a work in which he addressed the concerns he had about improvisation as part of the creative process. Even when he frequently used "chance operations" in his later music, those aleatoric works weren't so much reliant on random in-the-moment inspiration so much as on a performer using Cage's specific instructions to conceive of his/her own composition before a performance. Big difference there! How to Get Started, then, is a special work for him—and, up until Friday, it had been performed only once in public, by Cage himself, during that conference in 1989.

On Friday, however, Symphony Space teamed up with the ongoing PEN World Voices literary festival to stage a day-long event surrounding How to Get Started. The event featured not only professional artists like writer Etgar Keret and musician/founding member of Kronos Quartet David Harrington, but also three audience members, picked at random, all doing their own renditions of Cage's work.

How to Get Started goes something like this: The performer picks 10 topics that he/she will extemporize on for a brief amount of time (in Cage's performance, his improvisations never went past three minutes); those topics are written down on numbered index cards, one for each topic. A random number from 1-10 is chosen, and whatever number is chosen will correspond with a particular topic. The performer riffs on that topic, without any notes whatsoever. Then another number is chosen. While the performer improvises on that second topic, his/her discussion of the first topic is played back concurrently. When a third number is chosen, both of his/her previous improvisations are played back concurrently...and so on until, once the last topic is reached, all the improvisations are played together (though not all at the same volume level; the most recent is the loudest).

The effect of How to Get Started is quite fascinating: a sonic representation of the human mind at work. In some ways, however, it's an even more revelatory experience for the performer, who finds him-/herself possibly fighting past his/her previous improvisations in order to be heard, among other possible roadblocks on the way. I, alas, was not one of the lucky audience members picked to do my own performance—but down in Philadelphia, there is an installation devoted to this particular Cage work, one which allows anyone—anyone who makes an appointment beforehand, at least—to record their own realizations. I'm tempted to trek down to Philadelphia just to do this; hey, Ma, I'm performing a work by John Cage!

For now, though, I have memories of Keret's and Harrington's particularly memorable performances to hold onto. Ah John Cage, what an oddball genius you remain!

★ The Rings of Saturn (1995, W. G. Sebald)
Yes, I did some cramming in order to prepare myself for Patience (After Sebald), picking up a copy of the particular Sebald book that Grant Gee, in his film, explores in great depth. Thankfully, though, The Rings of Saturn is stimulating enough that it never felt like mere "work." This is an amazing book: an intellectual/historical/personal travelogue that taps into a spirit of restless adventure that reminds me of why I consider Jack Kerouac's On the Road to be one of my favorite pieces of literature ever.

I hadn't heard of Sebald at all before I was assigned to review Patience (After Sebald); now, I can't wait to read more of his work, to see what new horizons of knowledge and reflection await!
Posted by Kenji Fujishima at 5/07/2012 08:00:00 AM