Members of the Wedding 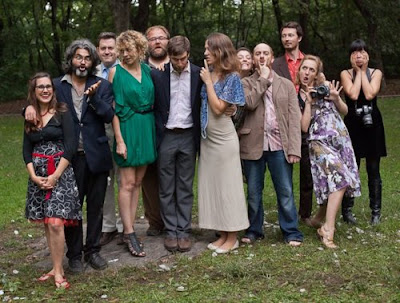 My latest review for Slant Magazine is that of a Woody Allen-ish ensemble film entitled Richard's Wedding, the debut feature of writer/director/star Onur Tukel (who I know only from his performance as one of three brothers in an oddball indie called Septien, made by Hammer to Nail creator/film critic Michael Tully and given a limited release by Sundance Selects last year). This one's playing at one independent theater in New York—Brooklyn's reRun Gastropub Theater (which, by the way, is a pretty cool theater that, if nothing else, serves amazing popcorn)—starting this Friday, so for now only adventurous New Yorkers will have a chance to see it. Long story—or review—short: I think I tried my best to take the film on its own deliberately abrasive terms, but I found the experience of watching these mostly unpleasant characters ultimately unrewarding. But Tukel accomplishes what he sets out to do, more or less. Take that for what it's worth.

[EDIT (Wednesday, May 30, 2012, 11:57 A.M.): Last night, Michael Tully himself informed me that Richard's Wedding is not Tukel's first feature—he has a few other previous features to his credit. It's just the first in which he takes on a starring role in addition to taking on roles behind the camera. The review has been amended accordingly, and I regret the error.]
Posted by Kenji Fujishima at 5/29/2012 06:00:00 PM