A Few More Dispatches from the Tribeca Film Festival

BROOKLYN, N.Y.—The Tribeca Film Festival ended Sunday night, so as far as I know, you won't be able to see any of the films I saw and/or reviewed since my last Tribeca round-up. Still, that doesn't mean you can't read my pieces and keep the ones I reviewed positively in mind for the future...right?


I ended up seeing "only" four more films since that last Tribeca post, two of which I officially reviewed: Ian Fitzgibbon's surprisingly decent Death of a Superhero at Slant Magazine and Alex Karpovsky's insinuating psychological thriller Rubberneck at The House Next Door.

Neither of the two other films left me in the mood to wildly sing its praises. At least Magnus Martens's Swedish crime comedy Jackpot is good for a few genuine bad-taste laughs to go along with its utterly predictable nihilism, especially in an extended setpiece that follows the central criminal band's increasingly hapless and hilarious attempts to dispose of a corpse. Jackpot could best be described as the Coen Brothers' Fargo redone as out-and-out cartoonish farce; if that kind of thing sounds appealing to you, this one delivers the bloody goods. 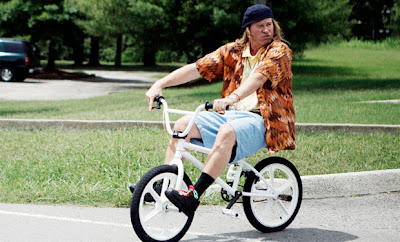 The Fourth Dimension is a tougher nut to crack. An anthology film featuring contributions from Harmony Korine, Alexei Fedorchenko and Jan Kwiecinski, it opens with title cards explaining the concept of the "fourth dimension" (including, helpfully, a quote from Back to the Future), and then setting out a bunch of rules imposed by producer Eddy Moretti on the three filmmakers—many of which are openly silly (examples: "The hero must have a missing tooth," "The director must direct one scene from the film with a blindfold on over his or her eyes" and so on), none of which have anything to do with any "fourth dimension." What binds these three disparate short films together, then? Perhaps just the idea of characters achieving some higher plane of existence, whatever that means to them personally.

In any case, Korine's "The Lotus Community Workshop" is memorable chiefly for featuring Val Kilmer playing himself as a self-help guru/charlatan who spends the rest of his time basically getting stoned and hanging out with his girlfriend (Rachel Korine). None of this adds up to much more than a prank, but Kilmer is a hoot to watch, especially when you get to the end and hear his auto-tuned "Fourth Dimension" song at the end.

Fedorchenko's "Chronoeye" is the closest this omnibus comes to directly engaging with the fourth dimension, featuring as it does a scientist named Grigory (Igor Sergeev) who has created a device to try to visit moments in the past and future—except that, whenever he is able to visit the past and the future, the camera always seems to be pointed at the most undesirable angles. In his obsession with exploring the past, Grigory seems ignorant of what's around him in the present, including the sexy female neighbor (Darya Ekamasova) who seems to have a thing for him. This is, for my money, the most interesting of the three segments, and sure, I'd consider it my favorite.

Other critics, for some reason, seem to be picking Kwiecinski's segment, entitled "Fawns," as their pick for best in show in this anthology. Personally, I found this parable of hipsters learning to care for someone other than themselves during an impending apocalypse to be an interminable bore—occasionally striking visually but a complete void as far as human interest goes.

One out of three in the case of The Fourth Dimension = not enough to give me a reason to recommend it even for its intriguing concept and occasional choice bits. So it goes with yet another one of these portmanteau films.

And on that (slightly sour) note, thus ends my Tribeca Film Festival experience this year. Obviously, if I wasn't also juggling a day job in addition to checking out films screening at the festival this year, I might have seen more of what I really wanted to see (the one film I regret not being able to schedule: Ira Sachs's new film Keep the Lights On, which played to generally appreciative audience at the Sundance Film Festival a few months ago). But hey, since I'm not doing this film-criticism thing full time, I'll gladly take what I can get!
Posted by Kenji Fujishima at 5/01/2012 08:00:00 AM