California 2010: In Which I Assess How Los Angeles Played Itself

EAST BRUNSWICK, N.J.—As it turns out, my friend and I more or less stuck around in Los Angeles for the weeklong duration of our trip last week. No San Diego, no Sequoia National Park, no Santa Barbara wine country, as I had originally hoped; all will have to wait for my next voyage to the West Coast.

Nevertheless, Los Angeles offered its own considerable fascinations and rewards...and it's such a sprawling city that not even a week was enough to take in all there was to take in. I will surely be back.

Obviously, my impression of the town is skewed by the fact that I was a tourist for only a week, not a resident for years/life. But, if I had to boil my experience of the City of Angels down to one phrase..."fascinatingly contradictory" would sum it up, for me. 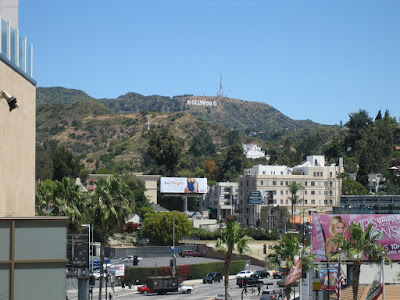 For many visitors, one of the great selling points of Los Angeles is the chance to explore the place which has become synonymous with American cinema; I speak, of course, of Hollywood. But "Hollywood" has become not just a section of the city of Los Angeles, but a state of mind, one associated with larger-than-life celebrity, international stardom, glamour, privilege. I imagine most people who visit, or even live in, Los Angeles come, at least in part, to tap into that mindset, both mentally and physically: to bask in that privilege, whether or not you are part of that class, and to walk the same streets as these real and/or imagined icons you've no doubt seen in the movies, in the news, in tabloids, or what have you.

Hollywood also famously carried the nickname "The Dream Factory"...and, at its best, walking along Hollywood Boulevard a couple days last week, as well as touring through Hollywood, Beverly Hills and Bel Air on the Starline Celebrity Homes Tour, the place felt like many of my classical-Hollywood-cinema fantasies flickering to life. (The fact that the sun shone brightly just about endlessly on those days only added to the splendor.) 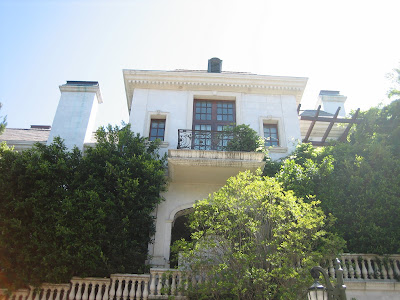 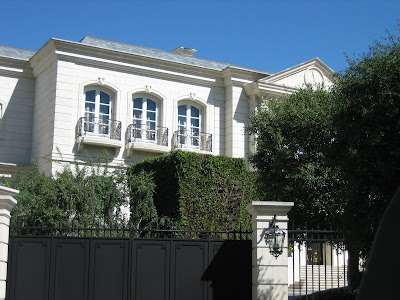 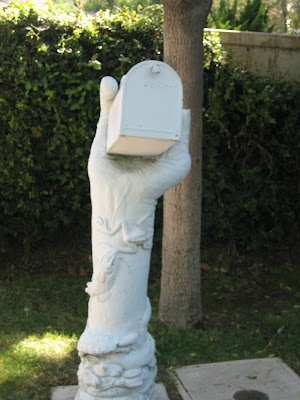 And yet, as much as Hollywood holds the (unspoken) promise of getting physically closer to a lot of those celebrities you know and love, the town makes as much of an effort to enforce the bridge between a celebrity and his/her adoring public as it does encouraging that public to try to cross that bridge. I mean, why else stage a sumptuous red-carpet premiere for the recent romantic comedy-drama Letters to Juliet in front of the legendary Grauman's Chinese Theatre—out in the open, mind you—and implicitly encouraging a horde of people to gawk at movie stars coming out of stretch limousines...only to deny those adoring fans a particularly good glimpse of the stars they came out to see? 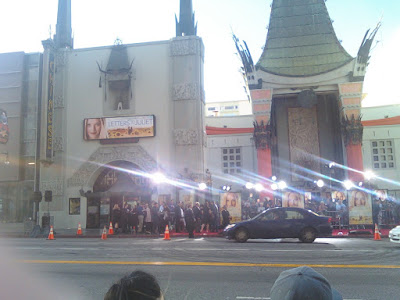 In that way, Hollywood is the equivalent of a parent who wiggles a reward in front of a child, then pulls it away from them with an "Unh unh unh" when that child expresses excitement at seeing that reward. Hollywood The Town teases us in the general public with the hopes of getting close to movie idols, but then it imposes further barriers, maintaining that distance. In that way, it truly is a "dream factory"—because it's all about furthering dreams.

That's probably not such a bad thing. Me, I love to dream; if I didn't, I probably wouldn't love the cinema as much as I do. As much as one may wish to get physically or even emotionally closer to movie stars in Hollywood, enforcing the mystique is perhaps the only way Hollywood can truly thrive. In any case, this contradiction that drives Hollywood The Town and Hollywood The State of Mind tickles me to no end—but only during my travels last week did I fully grasp it. 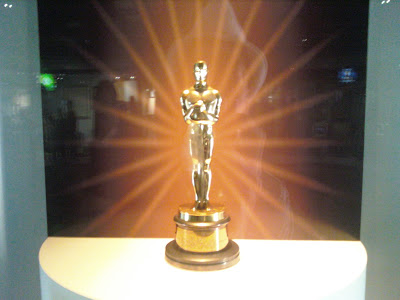 ***
There's one other major contradiction in Los Angeles...though actually, it's more a "division" than a "contradiction," really—a class division. 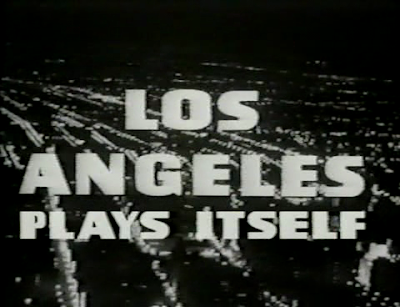 Film scholar Thom Andersen touches upon this in his 2003 video-essay epic Los Angeles Plays Itself—which, thanks to a VHS rip floating around on torrent sites (the only way to see it short of keeping an eye out for rare theatrical screenings), I watched again on the way to and from L.A., and which gained so much more in resonance after I had spent some time in the city of which he speaks. In its closing stretches, most pertinently, Andersen extols American low-budget "neorealist" films like The Exiles (1961), Killer of Sheep (1977) and Bush Mama (1979) for collectively bringing to public consciousness the less exposed aspects of lower-class life in Los Angeles. 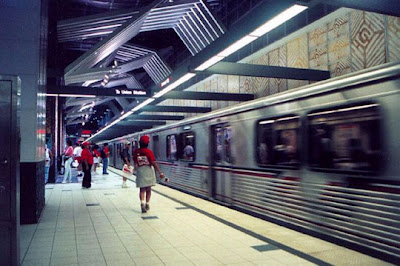 Even without fully refreshing myself on Andersen's insights before embarking on the trip, however...well, if you venture into Los Angeles's famously less-than-wholly-reliable Metro public-transportation system, as my friend and I did on a handful of occasions, you can't help but notice that, for the most part, only certain kinds of people seem to take Metro trains and/or buses: middle- and lower-class folk, college students, tourists and the like. Unlike in New York, you are far less likely to see, say, men in business suits in L.A. Metro subway lines; at least, I don't recall noticing any people of that type during the times I rode those Metro trains.

My visceral awareness of this wide gap between the haves and have-nots as it plays out in Los Angeles increased the more my friend and I spent swimming in wealth above ground: seeing all those luxe celebrity houses, eating overpriced food in chic restaurants, even exploring old-Hollywood stardom at the Max Factor Building-set Hollywood Museum. More often than not, we felt more like outsiders immersing ourselves in a faintly alien environment, feeling awkwardly out of place amidst the glitz.

Fitting, then, that, on the night before we flew back to New Jersey, we decided to have dinner at Noodle Planet, a cheap Asian-food place in the UCLA area. I can't speak for my friend, but I certainly felt more at home there than at, say, Spago or Mr. Chow. The latter, especially, was noteworthy for being an upscale Chinese restaurant that felt far more like a nightclub than any Chinese restaurant I went to in Beijing a couple years ago; they didn't even offer chopsticks as a utensil choice! (The food at both places was still quite excellent, I have to admit, even if way overpriced for the portions served.)

This is not to say that I necessarily felt more comfortable in those subways either; it's a bit disconcerting to see so relatively few people in Los Angeles subway stations compared to New York subway stations. (The fact that L.A. subway lines are essentially free to ride doesn't seem to have made a difference in that regard.) But then, New York's extensive MTA system actively encourages usage, since it extends just about everywhere in New York City that you would think to go. Los Angeles's far more complicated and less extensive Metro system, by contrast, seems to just encourage people to stay above ground and drive wherever they need to go—unless, of course, they're forced to take buses above ground. 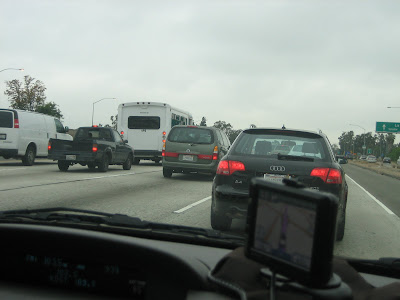 
***
By the way, I say all this not to denigrate the town. I could certainly be mistaken in my impressions; Angelenos, by all means, feel free to correct me if you think I'm presenting an inaccurate view of your city! I still very much enjoyed my week there, and if nothing else I loved the experience of being able to step way outside of my geographical comfort zone and experience, on my own, an unfamiliar part of the world.

I guess that's another way of saying that I've come to love traveling. Maybe all these years of traveling to all sorts of imagined cinematic worlds have instilled a wanderlust in me in the real world.
Posted by Kenji Fujishima at 5/21/2010 12:45:00 AM