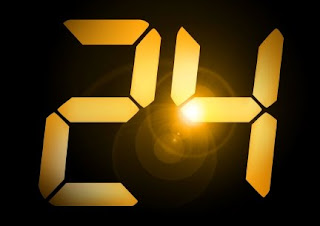 As with much of this last season of the FOX television series 24, I watched only about one-third of Monday night's two-hour series finale, the last third. But as the series ended with Jack Bauer once again faced an uncertain future, literally dissolving from our view as ever-loyal Chloe (Mary Lynn Rajskub) ordered the satellite overheard shut down, I found myself feeling an unexpected emotion: regret upon realization that there would be no more Jack Bauer Power Hours to speak of (at least until that much-discussed big-screen movie materializes).

I honestly didn't think I'd feel anything of the sort as the series—which, after relatively sagging ratings this season, finally and unceremoniously got hit by the cancellation axe—wound down to its final ticks of the clock. Again, I had only watched bits and pieces of this final season, finding myself increasingly indifferent to this latest big-scale terrorist threat—which seemed no different from big-scale terrorist threats of seasons past—and to Jack's inevitably failed attempts to stave off the human beast inside of him. It had all been done before, and this time, not even the New York setting (which, most of the time, barely looked like New York) could bring any inherent freshness to the rote plotting.

But, as the final seconds ticked away...well, while I am glad that the series is finally over, I can't help but think fondly as a whole over the many, many hours of entertainment the show has provided year/day-in, year/day-out. Until the next big zeitgeist-tapping high-octane action series comes along, 24—as morally problematic and silly as it often was—will always have a place in my trigger-happy heart. 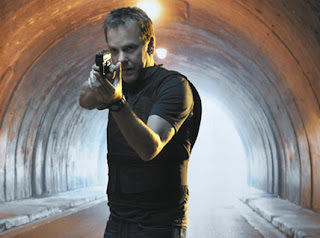 No surprise, really, that Jack was not going to go out on a wholly positive note; that would not have been true to the nature of the series as a whole. Over the course of its eight seasons, 24 fashioned a modern-Sisyphus myth about a hero who was always called upon to save his country from disaster, and who kept on going in spite of all the political and personal weight he kept accumulating each season. So of course the series began to repeat itself as it dragged on; for all the political commentary that many critics have read into it, the basic appeal of 24, really, was to see just how deep into the moral and physical muck Jack was willing to go, time and time again, in order to get the dirty but necessary job done.

Perhaps it doesn't really matter, then, that (in this writer's opinion, at least) the series peaked creatively in its second season and afterwards remained content to play out hit-or-miss variations on its usual themes and scenarios. (Its Emmy-winning fifth season was, I suppose, the best of those variations, though I still think its seventh is sorely underrated, if perhaps less immediately memorable that previos years.) The series' repetitive form was, really, just following Jack Bauer's Sisyphean function. Fitting, then, that its series finale ending up feeling less like a culmination and more like a standard cliffhanging season finale. For Jack, the perils will never end; whatever light he finds at the end of his tunnels will always be temporary at best.

There's plenty more to say about 24, but to do that, I will turn it over to film critic Aaron Aradillas and critic/filmmaker Matt Zoller Seitz, both of whom collaborated to produce this thorough, and thoroughly excellent, five-part video-essay series on the show.


I don't see much to quibble with in these videos; 24 was never consistent in its political commentary, but that didn't make its politics any less interesting to parse, and the writers certainly didn't allow politics to overwhelm the suspense and the emotions. The series may ultimately end up being considered more a relic of our time than a masterpiece for all time, but at its best it was still a fascinating, thrilling, surprisingly soulful and sometimes genuinely troubling ride.

P.S. By the way, anyone waiting for me to say anything about that other series finale that aired this past Sunday night will have to wait for a long, long while. I haven't watched a single full episode of Lost, and, unlike MSNBC.com film critic Alonso Duralde, I didn't dare tune in without having seen the rest of the series. I will say, though, that, having heard bits and pieces of what transpired in it, and wading through the wildly mixed opinions on it, I do find myself intrigued enough to seriously consider giving the series a spin on DVD in the future. If only I had time to invest even in TV series on DVD these days; I'm barely making any progress on that Twin Peaks box set I blind-bought last year, for instance...
Posted by Kenji Fujishima at 5/26/2010 12:01:00 AM