I apologize for not being able to squeeze in much time for blogging about my first-ever trip out to the East Coast, but my friend and I have been so busy with sightseeing, touring and social engagements in the past couple of days that I always find myself ready to collapse with exhaustion by the end of each day.

Somehow, though, I've summoned up the energy to dash off this quick update about how things are going on this trip. Well, so far, it's been going pretty awesomely, if tiringly. I'm finding myself genuinely intrigued by Hollywood, although not so much in the "ooh, I can spot a lot of celebrities here" kind of way (though don't get wrong, that is certainly one of its big draws, and I'm certainly not immune to that). It's the nature of celebrity in this town—of how much Hollywood tries to enforce that celebrity by keeping a certain distance between a star and his/her adoring public—that fascinates me.

Sorry if that sounds somewhat cryptic; I hope to delve more deeply into what I mean by that in a later post, and also to set out some other reasons why I'm enjoying my time here so far. For now, though, a photo, to tide all you readers over; you can call this a teaser of sorts: 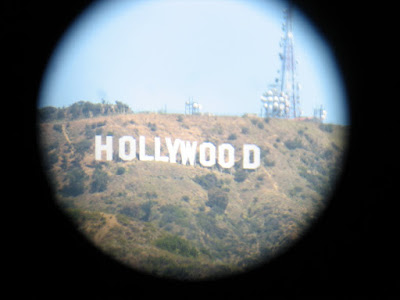 Oh, and did I mention the weather has been beautiful here so far? Bright and sunny, but not too humid? That's certainly a plus, compared to the weather reports I've been getting over in New Jersey/New York. Guess I picked a lucky week to go traveling.
Posted by Kenji Fujishima at 5/13/2010 08:00:00 AM