BROOKLYN, N.Y.—Starting today, I have three days this weekend, rather than the usual two, to catch up on films, socialize (I hope) and just generally enjoy life outside of my day job. I already have my Saturday set, for the most part: The newly designed Museum of the Moving Image in Queens is re-opening tomorrow, and among the films being screened on its first day jumping back into New York cultural life? Jacques Tati's Playtime and Stanley Kubrick's 2001: A Space Odyssey—both in 70mm! I will be seeing both, even though, honestly, Playtime—one of my five favorite films of all time, even though, up 'til now, I've only seen it on tube and widescreen TVs via DVD—is the one I'm more excited to see in its original format. (I admire 2001 a great deal, don't get me wrong...but it's probably my third favorite Kubrick film overall, behind Barry Lyndon and Dr. Strangelove. Of course, I don't discount the possibility that may well change tomorrow, seeing it on what I hope is a laaaaarge screen.) Also planned for this weekend: the new 35mm print of Sergei Eisenstein's Battleship Potemkin at Film Forum—a classic of the cinema which, to my shame, I have not yet seen; and catching up with one or two of the newer releases. Somewhere within all that moviegoing will be a stage performance and, I hope, a TV on which to watch the Jets take on the Patriots Sunday afternoon.

In the meantime, though: some catching up from last weekend. 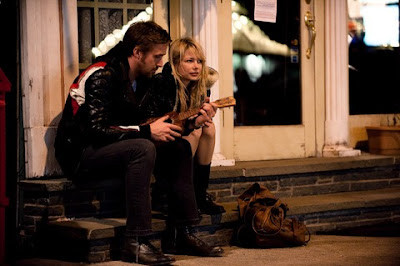 In addition to The Leopard—which I do plan to blog about, but not until I can get my hands on a copy of the Criterion DVD—I finally caught up with Derek Cianfrance's highly praised Blue Valentine (2010) this weekend. Let me sum up my reaction this way: I was far from unimpressed, and occasionally I was moved, but I'm not convinced it fully realizes its grand aims either, for all its incidental beauties and obvious depth of feeling.

Blue Valentine—along with that other celebrated relationship drama of 2010, Maren Ade's Everyone Else—attempts to dissect a relationship going south. Instead of Ade's chronologically linear behavioral observation, though, Cianfrance cuts back and forth between Dean (Ryan Gosling) and Cindy's (Michelle Williams) sour current reality and the relationship's more innocent beginnings. In that way (and this is not meant to trivialize the film, by any means), Blue Valentine plays like a far less playful, more serious-minded (500) Days of Summer, where one cut between past bliss and present disillusionment can pack a devastating emotional punch. Cianfrance adds to the contrast between past and present by shooting Cindy and Dean's courtship sequences on a markedly grainier film stock and with a more vibrant color scheme than the present-day scenes, with its slicker look and duller, earthier tones.

For all the non-chronological slicing and dicing, Dean and Cindy's relationship follows a fairly familiar trajectory. They meet while Cindy is in college, and Dean—working for a moving company at the time—sweeps this ambitious, career-minded woman off her feet with a banjo and an earnestly sung tune (which, not too subtly, is called "You Always Hurt the Ones You Love"); she becomes pregnant from a previous relationship, though, and after she finds herself unable to go through an abortion, they decide to get married. But, of course, that original romantic spark doesn't last in married life. The film itself opens in the waning days of their marriage, and later on, we see Dean—a house painter, bearded, given to fits of alcoholism—making one last desperate attempt, in a futuristic sex-hotel room, to rekindle the heat missing in their union. 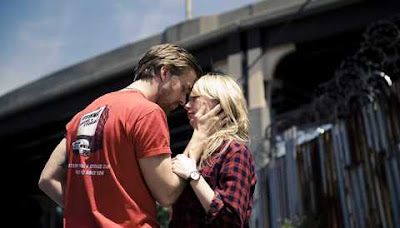 Within this familiar story, however, Cianfrance and his two lead actors manage to locate moments of messy emotional truth, most memorably in those lengthy scenes in that sex-hotel room. As Dean and Cindy circle each other, awkwardly trying to rouse each other to some kind of romantic passion, these sequences gradually take on a John Cassavetes-style power—a sense of raw, unadulterated life being played out in front of a closely observing camera.

And yet, for all these impressive moments, by the time the movie was over, I found myself struck by how little I felt I actually knew these two characters. Basically, what you see—what Cianfrance wants to show you within the moments he chooses to film—is what you get; the result is that Dean and Cindy feel more like sketches of character types—Dean seeming like a wannabe-bohemian type, Cindy an ambitious go-getter type—than fully fleshed human beings. Maybe Cianfrance is aiming for universality by deliberately blurring his characters' specifics...but the skin-deep characterizations might explain why, for me, the ending doesn't quite pack the emotional gut punch that it clearly aims to evoke (unsuccessfully aided by attendant fireworks in the background as one character walks away from the camera and another walks toward it). 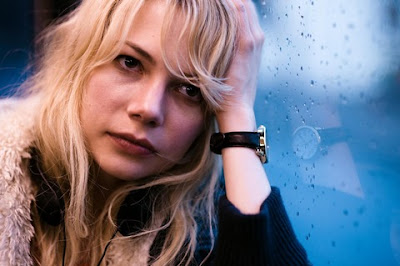 Not even the undeniable virtuosity of its two lead actors are enough to transcend the script's psychological gaps. Williams does the most creditable job with her part; the long-suffering Cindy ends up being the one that elicits the most sympathy. As for Gosling, though...well, now that I think about it, this may well be the first time I've actually seen him act onscreen (no, I haven't seen either The Believer, Half Nelson or even The Notebook), and based on his performance here, I'd have to say that I find his technique—his way of twisting and shading line readings in ways you never quite expect—interestingly suggestive at best, merely show-offy at worst. He's never not watchable as Dean, to be sure...but, for all his wannabe-Brando mannerisms, you're always aware of Gosling's mental gears turning underneath rather than his character's, with almost every gesture feeling calculated for the camera rather than lived-in.

Of course, maybe Gosling is merely compensating in his own way for a character that ultimately seems more sketched in than completely imagined...and for a film that, in the end, feels more like a superficial gloss on broken relationships than an emotionally draining immersion in one.

Blue Valentine is, all in all, not a bad film, really. But this weekend, I know I'll be seeing better ones!

To Jupiter, and beyond the infinite!

Hey man,
Just thought I'd let you know I enjoy your posts a lot.

I can't help my eager anticipation to see Blue Valentine (even though I know it's mainly because the trailer looked so great, and Michelle Williams is amazing). But I totally agree with your point on Gosling; I could never get past the idea that his acting was a rouse rather than a portrayal of the characters he plays (although I have to say that he is quite good in Lars and the Real Girl).

Anyway, you're doing an awesome job. Keep up the great work :)

Thanks, Adrian! I haven't seen Lars and the Real Girl—but that's supposed to be a comedy, right? Maybe Gosling's style of acting might work better in a comedy, where psychological authenticity isn't necessarily a requirement, than in a John Cassavetes-ish psychodrama like this.

Mmm... I would say Lars and the Real Girl is one of those that tries more for drama, but masks itself with its infrequent comic intrusions.