Playtime: Does It Get Any Better Than This?

BROOKLYN, N.Y.—Every so often, people ask me what film I consider my favorite of all time. In the past, I've usually responded that I have a handful of titles in mind that I really love above most others, but that it was too difficult for me to narrow it down to one single favorite. 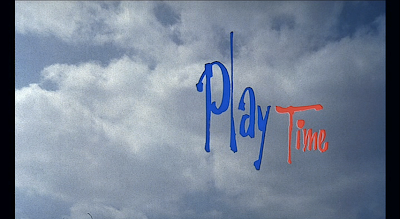 But folks, I went to see Jacques Tati's Playtime in 70mm on Saturday afternoon at the reopening of the Museum of the Moving Image up in Queens. Having finally seen this 1967 masterpiece projected in a theater, I think it's probably safe for me to go ahead and declare this to be officially my favorite film ever (at least, until I see another film that overthrows it in my affections).

When it comes to those handful of films that I prize above all others (Playtime, Vertigo and Fallen Angels are among that select few)...well, I don't really have any set criteria to make such a determination. As with a lot of my reactions to films, it's mostly a gut feeling, one that will eventually (hopefully) be buttressed by some kind of critical/intellectual content. In the case of Playtime in 70mm, that feeling manifested itself in the big smile on my face and a familiar lightheaded feeling that I get only from certain great films—a feeling Roger Ebert might call "elevation"—neither of which dissipated for all of the film's 124 minutes. (Only a maniacal elderly laugher sitting two seats to my right threatened to derail my blissful savoring of the experience, intruding as he did with horse-like top-of-his-lungs laughter that made one of my viewing companions want to strangle him.)

What is it about this particular film, though, that inspires me to proclaim it as the one I prize above all the others I've seen in my (admittedly relatively brief) lifetime? I think it has a lot to do with the fact that, within its deep-focus compositions, its de-emphasis on central characters and its ceaseless comic imagination, I sense a full expression of my own way of looking at the world. 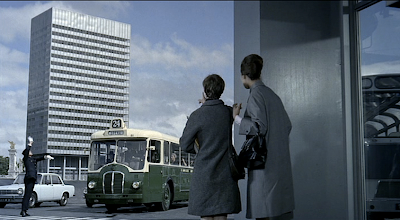 I remember the first two times I watched Playtime, seeing it first on a tube television set while still a college student at Rutgers, then later on a plasma-screen TV at home after having received the updated Criterion DVD edition as a birthday present. Back then, my trips to New York City were far more infrequent than they would later become...but every time I would travel into midtown Manhattan, I would stare up at the tall buildings surround me and always think back to the skyscrapers and various other pieces of city architecture in Tati's Paris, and how overwhelming and coldly industrial they can all seem to an outsider. Then I started commuting into Manhattan regularly for my job, and gradually that sense of wonder dissolved, as it inevitably will once familiarity sets in. 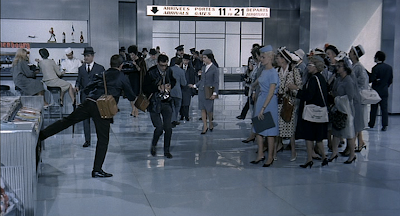 So seeing, once again, that group of American tourists traveling through Paris—with occasional detours into the side adventures of Tati's own M. Hulot—helped reawaken that initial sense of wonder at experiencing the big city for the first time. But, having felt like I've lived a bit since the last time I saw the film, Playtime reawakened a lot of other familiar feelings. Its opening scene, for instance, set at the Aéroports de Paris, perfectly catches the sometimes bewildering hustle and bustle of being at an airport, and Tati is able to convey this not by taking one character's point of view and following his/her progress through an airport, but by basically taking an omniscient perspective and inviting us to observe all sorts of people interacting in this one unmistakably modern environment—and, in this film, Tati is so generous with giving just about every character something amusing to do that there is always something to look at, in just about every inch of its widescreen frames. (That kind of attention is detail is the reason why this film works better projected big in a theater rather than on a much smaller TV screen.)

It's that generosity, in the end, that moves me the most about Playtime. By de-emphasizing central characters, Tati is thus free to roam around all the various spaces in his (recreated Parisian) metropolis, to look not only for comedy wherever he can find it—whether in the sounds made cushioned chairs, or even in the droop of a model airplane in a restaurant with too much heat—but also for the possibilities of human connection in the potentially alienating modern milieu he so pitilessly captures. It's the same kind of generous spirit I'd like to think I embody in my own life: an embrace of humanity, in all its variety and mystery; an openness to all the world has to offer around me; and a willingness to forge personal connections wherever possible, especially in a highly populated metropolis such as New York. (That last part can sometimes be frustratingly difficult, as I've come to discover in the past few weeks...but I persist nevertheless, because you never know what sparks may fly in a chance encounter.) It's that curiosity about the world, and especially about the people who inhabit it, that I expect from any great artist and any great work of art; Playtime gives that cherished philosophy possibly its most sublime cinematic expression. 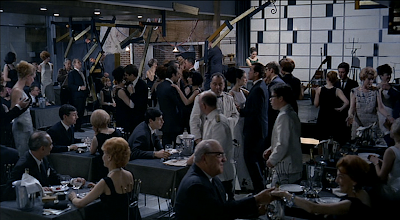 For all the talk over the years about the film being about big-city alienation, Playtime is ultimately an exhilarating, enlivening and genuinely inspiring celebration of life. Even as, during its euphoric second hour, a fancy restaurant experiences one mishap after another, the people dining in that restaurant manage to find ways to look past the mess and enjoy themselves anyway. (Seriously, every weekend for me in New York should be like that extended restaurant sequence, dammit!) And then there's the gift that M. Hulot's gives to the pretty young female tourist (Barbara Dennek) as she is about to head back to the U.S. It doesn't even necessarily matter what it is he gives her; the point is, even though he realizes he may never seen this young woman again, he has nevertheless made a connection that may well be remembered for the rest of both their lives.

I live for those kinds of connections. And I live for movies like Playtime. Films like that are why I love this art form as much as I do. 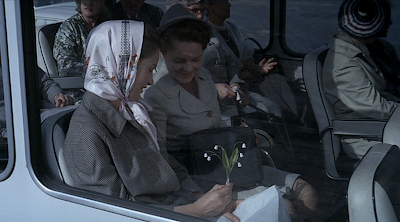 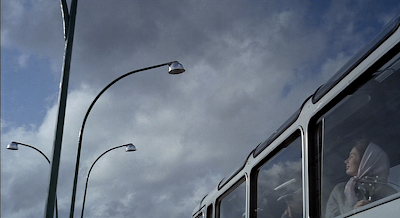 Wonderful write-up/tribute! I seriously hope that I get the chance to see Playtime on the big screen someday. Such a massively inventive work of art, really such a shame that Tati was expressing himself past the mass audience's ability to follow. You know that Playtime financially ruined him, right? Kind of tragic to think about but a splendid and lasting masterpiece resulted that we can still enjoy today.

I'd never seen this film before this month...and like you, I got to see a 70mm showing of it here in Toronto. Seeing all that detail so crystal clear...I almost didn't know where to look!

Great piece on a great film...can't believe it took me that long to see it.

Dave: Yeah, I've heard about the ruinous financial effect Playtime had on its creator. Just goes to show you how time usually gets the last word when it comes to art.

Seeing all that detail so crystal clear...I almost didn't know where to look!

Exactly! And the brilliance of Tati's approach here is that he often doesn't give you clear points of action on which to focus your eye; it's up to you, the spectator, to roam around each frame and figure out what you want to focus on. Very few films have that kind of audacity (though the guys who made Airplane! and Top Secret! probably picked something up from Tati).

Marvelous piece of writing, on a magnificent movie/experience. Thank you. It would be nice if you could join us, PlayTime fans unite in my Facebook group. 'Jacques Tati's PlayTime.'
https://www.facebook.com/groups/179759642128300/

Actually, Ingrid, I'm pretty sure I'm already a part of that group!