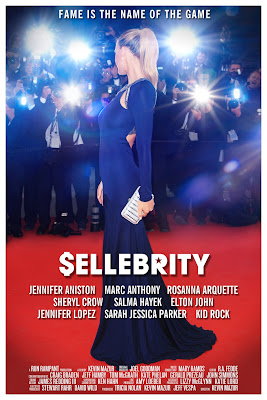 Or, at least, that's one idea that celebrity photographer Kevin Mazur wants us to take away from his debut documentary feature $ellebrity, which I reviewed for Slant Magazine here. There's more to the film than that, but for me, that's the thread that comes through most strongly. My inner humanist finds a certain value in a film that expresses such a sentiment...but considering the way Mazur seems to pin as much blame on the general public for fostering paparazzi culture as he does on the vulture-like photographers themselves (but oh, not him, surely not him), I have a feeling that he wasn't exactly working from a humanist perspective himself. Still, the film has its, uh, useful qualities; it's, at the very least, a slightly more interesting film than I was expecting going in.
Posted by Kenji Fujishima at 1/07/2013 06:00:00 PM No comments:

BROOKLYN, N.Y.—This was a fairly light week in artistic consumption, and attendant earth-shattering revelations were kept to a minimum. The closest I came to such an experience was with Italian filmmaker Pier Paolo Pasolini's 1971 adaptation of The Decameron, the opening panel of his so-called "Trilogy of Life." Actually, "life" could be one way to suggest the scope of Pasolini's film underlying the deceptive lightness of touch; many of the episodes in this unabashedly episodic film may deal with matters of flesh and spirit—but really, broadly speaking, isn't "flesh" and "spirit" the two things that make up all human existence, more or less? Pasolini's film feels like the work of a filmmaker who, taking off from Boccaccio's source material, wanted to cram in everything he had on his mind regarding sex, love, religion, class differences and art into this one film; the result is consistently surprising, endlessly playful, often irreverently funny but not without moments of darkness to puncture the frothy, airy surface at certain points. But hey, that's just how life itself is like, right? I wish I had been able to see the other two films in Pasolini's triptych, The Canterbury Tales (1972) and Arabian Nights (1974), this weekend at Museum of Modern Art...but thankfully, in this case, it's the Criterion Collection to the rescue!

Catching Up on Promoting Myself

BROOKLYN, N.Y.—Oh man, I've got a lot of catching up to do in regard to self-promotion on this blog!

For much of my November and December, I found myself consumed by balancing my Wall Street Journal day job with my In Review Online editor-in-chief duties, which in December including trying to organize an end-of-year cinema wrap-up. Now 2013 is finally here, all of that is done, and I can finally focus on other things. Behold the end result of all my duties here! (Thank you to all my writers at InRO for helping me pull this off!)

As a contributor to Slant Magazine, I also contributed to that site's end-of-year movies feature with a short blurb about my favorite film of 2012, Moonrise Kingdom. Click here to check out the whole shebang (Wes Anderson's film placed at No. 10). Oh, and speaking of Moonrise Kingdom, listen to me basically re-read my Slant blurb for Peter Labuza's Cinephiliacs podcast at some point during this most recent two-part end-of-year wrap-up episode.

Amidst all this, I still somehow managed to write some film reviews! Let's start with a couple of negligible items, both of them for Slant Magazine: that of Darragh Byrne's completely forgettable Irish drama starring Colm Meaney named Parked (review here) and Antonino D'Ambrosio's marginally more engaging documentary about the rise of punk entitled Let Fury Have the Hour (see here).

Over at Slant's sister blog The House Next Door, I penned this review of Brad Bernstein's Far Out Isn't Far Enough: The Tomi Ungerer Story, which screened during the DOC NYC festival here in New York in early November. I didn't love the film, but I wouldn't necessarily discourage anyone from seeing it whenever it receives a proper theatrical release; its interview subject—a cartoonist who pushed the boundaries of taste with his illustrations in the '60s and eventually got ostracized for his fidelity to his vision—is, if nothing else, an endlessly fascinating personality to witness onscreen.

Speaking of documentaries, I made my first proper review at In Review Online that of The Central Park Five, Ken Burns, Sarah Burns and David McMahon's often scalding chronicle of the institutional and personal injustices that befell five black New York City youths as they were sentenced for a horrific gang rape in 1989 in Central Park that they did not commit. It's an entirely honorable and sometimes incisive picture and definitely worth seeing, though I would hesitate to call it a great one (if only Spike Lee had handled this material instead of the ever-respectable Ken Burns...).

For my second review to date at InRO, however, I took on one of the biggest films of 2012: Kathryn Bigelow's much-lauded search-for-Bin Laden chronicle Zero Dark Thirty. Let's just say, I'm not entirely on board with the near-universal praise this film has been getting. You can read my ambivalent take on it here.

Email ThisBlogThis!Share to TwitterShare to FacebookShare to Pinterest
Labels: In Review Online, self-promotion, Slant Magazine, The Cinephiliacs, The House Next Door

NEW YORK—Happy New Year, everybody! I hope you all had a good one!

I suppose I should make a New Year's resolution to do a better job of keeping up with these weekly artistic consumption logs—and heck, even this whole blog in general—than I've done in the past couple of months or so. But I'm pretty sure that is a resolution that I will eventually break. I'll try my damnedest, however!

Anyway, my highlights of this particular week in artistic consumption came courtesy of that German-American Romantic Ernst Lubitsch—Ninotchka especially (having Greta Garbo at the top of her form as well as Billy Wilder's endlessly witty and layered dialogue sure helps, apparently). Just about everything you want to know about what interests me in cinema, as in life—specifically, the intersection between cold logic and warm emotion, and the ways both intersect and enrich each other—can be seen in this 1939 comic masterpiece.