BROOKLYN, N.Y.—A bout of sickness over the past weekend laid me low—or, at least, low enough that I didn't feel much energy in constructing my latest artistic consumption log even during the sick day I took from work on Monday. (I'm better, if not completely 100%, now, for those who were concerned; I'm assuming it was just a bad cold.)

Since I'm late with this log, once again it will go unannotated. Simply put: Philip Glass live ruled, the Oscars sucked, and Doug Wheeler's light-and-space installation at the David Zwirner Gallery offered a mind-expanding 10 minutes—which, in my case, was preceded by three hours of waiting in the cold. Another New York art event, another last-minute scramble to see it before it closes—an unfortunate pattern, that.

BROOKLYN, N.Y.—This past week, I've found myself about as busy writing film reviews as I've been busy seeing films and experiencing other cultural events. So you'll all eventually hear about some of the works I list below. For now, I'm afraid I'll have to keep this barebones once again.

Just know that, for New Yorkers who are into the theater, Signature Theatre Company's current production of South African playwright Athol Fugard's early 1961 drama Blood Knot is worth seeing...especially at the price of $25 a ticket. (With Broadway prices as through the roof as they are, one would, I think, be foolish not to jump on such a deal and take a chance on something unfamiliar!) Its final 10 minutes turn a seemingly harmless game of role-playing into a nightmare fantasy of apartheid race relations in a manner that is truly sobering and devastating.

I wish I had been able to articulate those sentiments to Fugard himself...who was sitting a mere two seats away from me, up in the balcony of Pershing Square Signature Center's Griffin Hall. But alas, when presented with an opportunity to do so, I got rather starstruck and tongue-tied. I did get to pick up his hat and hand it to him as he left the audience chamber...which led him to ask me what I thought of the performance, upon which I responded that I thought it was great (and I meant it, too). But that was it, in the end.

Oh well. At least I can feel content at basking in the glow of a wonderful theatrical experience. Because, in the end, that's all that matters, right?

BROOKLYN, N.Y.—I've suddenly found myself fairly busy, what with a bunch of film reviews and an interview blog post on the horizon...so this week's artistic consumption log will be another barebones effort. As you can see, though, the highlight was easily my first exposure to the gorgeous, haunting, ceaselessly changing textures of Steve Reich's Music for 18 Musicians via his 1978 ECM recording. Who says minimalism can't be beautiful? 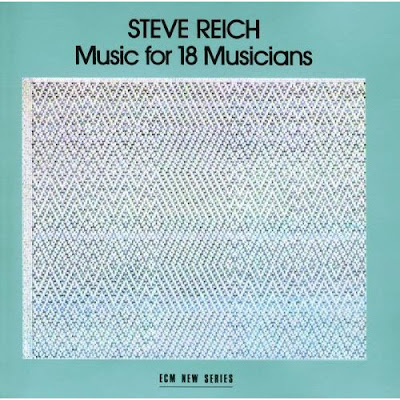 BROOKLYN, N.Y.—During this past week, I suddenly found myself—thanks mostly to the Philip Glass 75th-birthday concert that I attended at Carnegie Hall on Tuesday—developing a fascination with musical minimalism.

After hearing Glass's latest symphony, his Ninth, at that concert (a pretty good piece, actually, though I found the accompanying work, Arvo Pärt's Lamentate, even more impressive), I decided to scour Spotify to see what other Glass works the streaming music service had in its library...and lo and behold, I discovered they had the complete 1993 recording of his seminal 1976 opera Einstein on the Beach. So I listened to some of it that night...and since then, I haven't been able to stop listening to bits and pieces of Einstein, finding myself strangely fascinated by the seemingly endless repetitions and variations. Say what you will about Glass's brand of minimalism, but his music somehow worms its way into your skull, whether you like it or not. I guess I kinda like it, because I haven't been able to listen to, or think about, much else this past week!

Then, thanks in part to both Jan Swafford's The Vintage Guide to Classical Music and Alex Ross's The Rest Is Noise, I decided to search in Spotify's library for recordings of the work of some of Glass's minimalist contemporaries...which led me to the Bang on a Can recording of Terry Riley's groundbreaking 1964 work In C that I listened to as I came home from Juilliard's final John Cage concert Friday night. (Though In C is famously known as the first minimalist composition, it also embraces Cage's conception of "chance music" as part of its make-up, leaving instrumentation and length up to the performers while offering up 53 phrases and a set of performing instructions from which to fashion a performance. So it made for a good fit for post-Cage listening.) I also gave myself a brief taste of Steve Reich's Music for 18 Musicians, which I hope to get around to listening to in full sometime this coming week.

In short, I suddenly find myself on a serious modern-classical-music kick—so much so that even the emotionally devastating brilliance of Béla Tarr's Werckmeister Harmonies, which I saw for the first time on Friday afternoon, seems but a dim memory now in the face of so many endlessly repeating musical arpeggios rippling through my mind. (But hey, speaking of minimalism: Tarr's latest and supposedly last film, The Turin Horse, opens this Friday...)

Here's the log (which I didn't have time this week to annotate properly, so this will be just a bare-bones list of things I saw/heard):