BROOKLYN, N.Y.—Apparently seeing six films in one day—as I did on Saturday—was enough to sap me of, well, energy in general. (I'm sure the mere five hours of sleep I got on Saturday night didn't help.) Thus, another week, another bare-bones artistic consumption log (and a late one at that). Plus, I've been quite the busy, busy bee over the past week, and I'm anticipating this coming week to be about as bursting with activity—not just artistically, but as far as my career hopes goes. And that is all I will say for the moment. 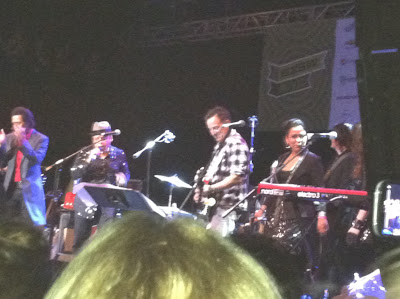 BROOKLYN, N.Y.—Wait...I actually had time to annotate my artistic consumption log? Wow, look at that!

Films
★ Sleepwalk (1986, Sara Driver), seen at Walter Reade Theater in New York
As my undying love for Wong Kar-Wai's Fallen Angels attests, I have a weakness for moody movies set predominantly during the night, where an atmosphere of seductive mystery envelops an often dreamlike narrative, cloaking things under cover of alluring darkness. Sleepwalk is the latest entry in this personal canon of mine; this second feature from unheralded New York independent filmmaker Sara Driver dives us into a seemingly desolate Lower East Side, in which a working-class mother (Suzanne Fletcher) finds herself caught under the spell of an ancient Chinese manuscript she is tasked to translate that slowly transforms the world around her. Jim Jarmusch did the gorgeous cinematography for this film, and it does share a spiritual connection with his 1980 debut feature Permanent Vacation (Driver is also best known for her collaborations with Jarmusch as producer of Stranger than Paradise); one can also sense a kinship of sorts between this and Martin Scorsese's After Hours (1985), another surreal chronicle of increasingly oddball goings-on in New York at night.

Man, I live for films like this. I could dream about movies like this all day long.

But don't take my word for it, New Yorkers. At the end of the month, Anthology Film Archives is screening all of Driver's three major films (this, You Are Not I before it and When Pigs Fly after it), none of which are easily available on video (yet). I look forward to seeing her other work; the rest of you will have a chance to discover Sleepwalk in what I assume will be the same brand new, beautiful-looking 35mm print that screened at Film Comment Selects this past Wednesday. Maybe, when you come out of it, you'll feel the same sense of melting enchantment that I did.

★ Moses and Aaron (1975, Jean-Marie Straub and Danièle Huillet), seen on DVD in Brooklyn, N.Y.
A friend of mine gave me a copy of New Yorker Films's DVD edition of this screen adaptation of Arnold Schoenberg's unfinished twelve-tone opera to me as a birthday gift at the end of last year; on Thursday night, I found myself bored at home in Brooklyn and decided to finally watch it.

I hadn't seen any of the work of this famous avant-garde filmmaking couple previously beyond seeing them in Pedro Costa's excellent 2001 documentary about them, Where Does Your Hidden Smile Lie?, in which Straub and Huillet spend the first 10 minutes or so of the film arguing over the right moment to cut away from a particular image. That same precision marks Moses and Aaron, allied to a minimalist style that emphasizes long takes that, at some points, seem to visually search for the God that Schoenberg's Moses perceives but can't quite express. It's a style that suits the opera, which is composed of static tableaux that play more often like oratorio than drama.

The real discovery of Moses and Aaron, for me, was the opera itself. This is surely one of the greatest operas ever written! Its atonal language is, to my mind, a perfect—and yes, often beautiful—expression of the kind of spiritual and religious doubts that are at the heart of this work, supporting a deeply philosophical interpretation of these Bible episodes that climaxes, at the end of its second act, in an unsettling soaring F-sharp that underscores the moment that Moses collapses onto the ground and desperately cries out, "Oh word, thou word, that I lack!" Schoenberg's opera was supposed to be three acts, but he was never able to finish the last act; I can't a more perfect ending, however, than the note of profound self-doubt that concludes the second act.

I could go on—especially in regards to how Straub and Huillet manage to subtly transform Schoenberg's meditation on words and images into something completely cinematic in nature—but perhaps that is for another blog post. Certainly, there's much to parse on another viewing. Best birthday gift ever?


Music
★ Autobahn (1974, Kraftwerk)
★ Radio-Activity (1975, Kraftwerk)
Yes, I was among the many stooges that attempted, and failed, to buy tickets to the upcoming Kraftwerk concert series at Museum of Modern Art. My dirty little secret? I hadn't actually listened to any of the German electro-pop band's music beyond the title track of Trans-Europe Express (and I was only exposed to that, really, through the ringtone of one of my college roommates). Well, thanks to Spotify, I now have the bulk of their major albums at my fingertips...so I decided to finally start listening to some.

The two takeaways from hearing these two albums:

Theater
★ Richard III (1591, William Shakespeare), performed at Brooklyn Academy of Music in Brooklyn, N.Y.
As Richard III, Kevin Spacey affects an exaggeratedly awkward gait and shouts and growls his lines about as often as he delivers them straight. In other words, he hams it up big time. It should be annoying, and I certainly wouldn't call it creepy or unsettling...and yet, somehow, it works in the context of this Sam Mendes-directed production, the last in Brooklyn Academy of Music's Bridge Project (bridging American and British actors together in productions of stage classics). Spacey's flamboyant, cartoonish villainy has the odd effect of drawing attention to himself whenever he's onstage but also decentralizing his character; he's so cartoonish that, whenever he isn't onstage, the spotlight naturally shines on the more human-scaled characterizations of the rest of the cast. The heart and soul of this production doesn't lie so much in Richard III—a magnificent bastard to the very end, notwithstanding that one moment late in the play where he's suddenly stricken with an attack of conscience—as in everyone his ruthless, vengeful machinations affects, especially Queen Elizabeth (Haydn Gwynne), who is one of the only characters who has the fortitude to stand up against him in that one electrifying tête-à-tête in which Richard tries to persuade her to give him her daughter's hand in marriage.

Beyond Spacey's performance, Mendes's production is notable mostly for some of its technical innovations: its economical use of one set, its richly varied lighting design, even its use of a live-video simulcast at a crucial juncture. It's modernized without being set in any specific time (this isn't a reinterpretation on the order of Ian McKellen's 1930s fascist-England Richard III); Mendes seems to be aiming for a vague sense of universality in this abstract take.

EAST BRUNSWICK, N.J.—At the beginning of the year, I made a resolution to, if nothing else, try to be more productive on the writing front. I don't know what happened last year or why, but I went through long stretches where I felt barely a desire to write any serious film criticism at all beyond those brief sketches of reviews I'd set out in my artistic consumption logs. 2012, however, feels like the year in which I need to make some kind of major change in my life; I'm still not really sure what that change would entail, but perhaps I could at least push that change along by making more of an effort to be productive as a critic/writer.

Thus, I've been a bit busier both at and outside of my day job...so busy, it seems, that I haven't even had time to put up links here at this blog to the stuff I've published recently!

So here, in list form, are some links for you all to peruse, if, for some reason, you haven't been following me on Facebook and/or Twitter:

The Snowtown Murders (2011, Justin Kurzel)—reviewed here [P.S. This film was originally called Snowtown, and some of you may have already heard about this film by that name. That title, in my opinion, should have remained.]
On the Ice (2011, Andrew Okpeaha MacLean)—reviewed here; I also did this interview of the director
Transfer (2010, Damir Lukacevic) and All Watched Over By Machines of Loving Grace (2011, Adam Curtis)—both reviewed here
We Have a Pope (2011, Nanni Moretti)—reviewed here

As I get more stuff published going forward, I will try to be more prompt with the linkthroughs. Considering that I will be heading off to Austin, Texas, once again for South by Southwest in a few days, I suspect the linkthroughs are about to get even more plentiful!
Posted by Kenji Fujishima at 3/04/2012 09:00:00 AM No comments: