EAST BRUNSWICK, N.J.—(The following is my contribution to the White Elephant Blog-a-thon.)

Yes, fellow cinephile bloggers: This year, I decided to throw my hat into this four-years-running annual blogathon and take on whatever random piece of possible cinematic junk I got randomly assigned. And boy, I got a real doozy for my first time out!

For those of you who don't know what this particular blogathon is all about—or what the hell blogathons are in the first place—see this post by Paul Clark over at the blog Silly Hats Only which inaugurates this year's installment. Once you've absorbed that, come back here and read about what I got to see for this one-day event over the weekend. 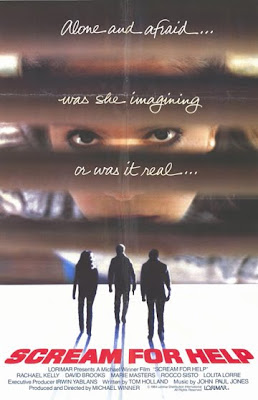 Scream for Help is a 1984 film from director Michael Winner, a British hack best known for helming the first Death Wish (and, um, Death Wish II and 3). It appears to have fallen through the cracks since its release; as of now, it's available only on used VHS, via a torrent download or on YouTube in nine parts. But it doesn't deserve to be; this one deserves a place in the annals of movies that are so bad they end up being almost kinda good. 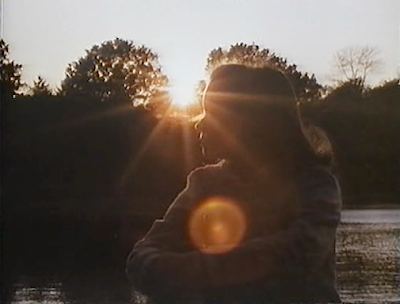 It begins with our young heroine (Rachael Kelly), shot in silhouette as the sun sets behind her, ominously intoning in voiceover: "My name is Christina Ruth Cromwell. I'm 17 and I live in New Rochelle. I think my stepfather is trying to murder my mother." Right then, the film cuts to an exterior shot of the Cromwell household at night... 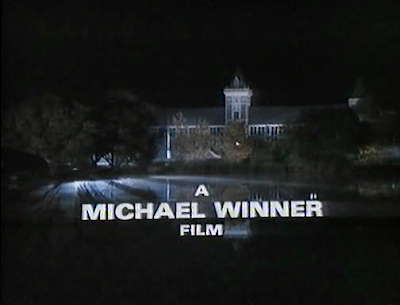 ...and composer John Paul Jones's melody for the opening credits literally crashes through. Oh boy, listen to that music! As Winner and cinematographer Robert Paynter try to ease us into the mood with a montage of establishing shots, here is this bombastic melody blasting away on the soundtrack, a music cue that plays like a second-rate imitation of Bernard Herrmann-esque swooning romanticism. (By the way, yes, that is the same John Paul Jones who played bass for Led Zeppelin.) 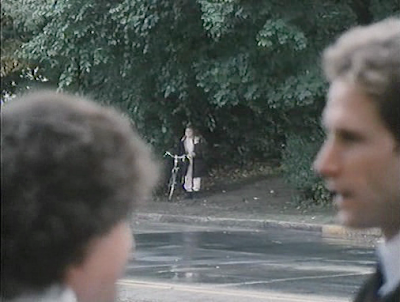 If you thought that was an oddly misguided directorial choice, check out the sequences about 10 minutes later in which Christie rides around town in her bicycle tailing the suspicious stepfather (David Brooks): This time, during these supposed moments of mystery suspense, Winner has called upon Jones to provide...big-band jazz music? What the heck???

The cheesiness doesn't end there. The acting in Scream for Help is generally pretty crummy, or in the case of some of the actors, laughably campy. (I assume Winner recorded the sound live; I say "I assume" because the dialogue often sounds dissociated from the actors speaking them, that's how dreadful the acting is.) Does the indifferent acting fail scriptwriter Tom Holland's dialogue, or is the dialogue already lame as it is? Considering Holland's later credits—writer/director of Fright Night (1985) and cowriter/director of Child's Play (1988), both films that straddle the line between intense horror and witty comedy/satire—I can't help but wonder...but then, maybe lines like "Don't listen to me; just wait until he kills you" and "Kissing you made me want to vomit" wouldn't do even the most experienced of actors any favors. Most damagingly, the storytelling is so brisk and choppy that attempts at sustained suspense barely register; all Winner provides in his direction is the sense of a storyline whizzing past you on a motorcycle.

So just on a technical level, this film is often plain embarrassing to watch. And yet...when you consider it on some of the bigger-picture levels—of plot, theme and even style—the film is, I submit, actually rather fascinating in its trashiness.

This is not a film that lacks ambition. From its simple premise, Holland's script wades into, among other things, matters of teenage sexuality, throwing its virginal heroine into the maelstrom of immoral adult sexuality to the point that she eventually expresses disgust with sex altogether. This unspoken moralism, of course, was a common thread among most slasher films made during that decade, many of which took perverse pleasure in punishing teenagers who acted on their horny impulses. Surely none of those slasher flicks, however, feature the image of a recently deflowered girl reacting to the sight of vaginal blood on her hand, as seen below: 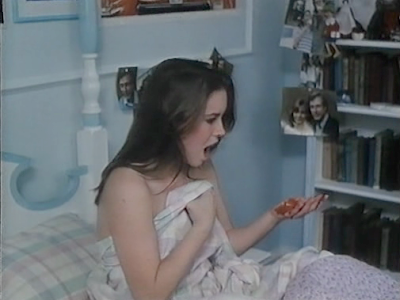 Scream for Help also aims to be tonally and stylistically ambitious. Horror, mystery, teen-angst drama: Winner and Holland attempt to mix them all in, and just when you think there's nowhere else the film can go, in its second half it becomes a kind of low-rent Desperate Hours, then evolves further still into a Straw Dogs rip-off, with our heroine forced to play the Dustin Hoffman role in protecting her mother from harm. Much of this ends up registering as unintentional comedy, by the way—but the film so rapidly devours its plot points and tonal shifts that that almost doesn't matter.

But there's one particular angle that offers a tantalizing way of looking at this film, one that almost explains away its many, many shortcomings. 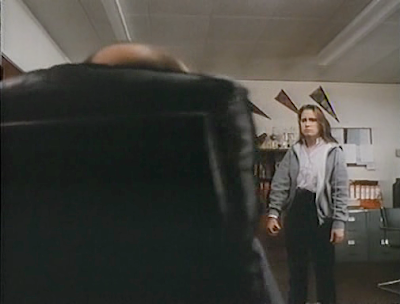 Christie, it is revealed early on in the film, previously had to be treated by a psychiatrist in the wake of her mother's divorce from her father, and so the film generates a bit of intrigue with the possibility that her suspicions about her stepfather's murderous intentions may well be all in her head.

It doesn't work out that way; Christie turns out to be 100% correct about her stepfather, and in no time he and two others are invading her home, threatening to kill them both and steal their money. There are no last-second "it was all a dream" twists in this one. Nevertheless, is it possible that those jarringly overwrought music cues are meant to call attention to themselves? That the acting is intentionally awkward? That the storytelling is deliberately choppy? That, in other words, Scream for Help as a whole is meant not to be taken at all realistically, but instead seen as a (clumsily executed) fever dream—one that, I daresay, is almost Marnie-esque in its twisted intensity—of one young girl's sexual fears and familial anxieties?

Imagine the possibilities! In such a context, then, of course the scenes of Christie doing her own surveillance work on her stepfather would feature music that seems largely brash and self-confident. Of course the moment she loses her virginity would feature wildly over-the-top throbbing love music. And, perhaps most hilariously, of course the film would end with Christie, having slain the last remaining villain, calling up the detective who dismissed her claims earlier and triumphantly intoning, "Maybe this time you'll believe me," and then cutting to an end-credits roll featuring a godawful tune with these words (I kid you not): "Christie / Don't ever listen to the words they say / You wouldn't have to change your ways / Talking to my Christie." 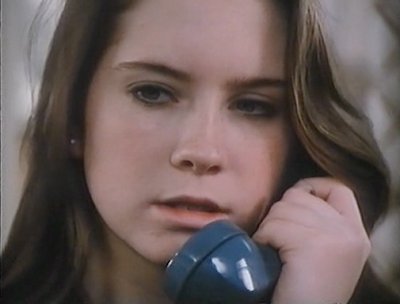 You see what I mean? Scream for Help is bad in such unusual ways, and with such conviction and fervor, that it gradually achieves a kind of euphoria reserved for only the most special of bad movies. It's some kind of trash masterpiece.
Posted by Kenji Fujishima at 6/15/2010 12:30:00 AM

Having embraced cinephilia as a nigh-religious calling, I've turned my back on howling laughingly at bad movies.

Except this one. This movie's been in my life for over 20 years now, and every time I watch it there's some weird little detail that pops up anew. The sleazy way the principal slides left and right in his office chair while grilling Christine. The word MUFFS on a girl's t-shirt. Lolita Lorre's face captured by a Polaroid in mid-coitus. There are too many oddball moments, too crafted to be accidental, and too wooly and out there to be intentional. The movie does stick in the mind because of these (and many, many other) moments, and we may never figure out why.

John Paul Jones wasn't the only Led Zeppelin veteran to score Winner's films - Jimmy Page picked up the composer's pen for DEATH WISHes II and III. Makes one wonder what Winner had on the band.

Thanks David! This really is one of those bad movies that I wish was available on DVD (last time I checked, you could find it via multi-part YouTube upload); I'd probably revisit it many times!