EAST BRUNSWICK, N.J.—Yes, my friends, I did see the big box-office draw of the weekend, Toy Story 3. I have some things to say about it, but I'm saving my thoughts for Friday, when I plan to post something about Pixar's latest production along with a few words about a digital restoration of Yasujiro Ozu's 1932 silent film I Was Born, But... beginning a two-week run at IFC Center that same Friday. I saw both of those films—the Ozu in an advanced screening—on the same day, and my first-ever viewing of Ozu's masterpiece may have somewhat influenced my response to Toy Story 3...in ways that didn't always reflect positively on the newer film.

I'll leave it at that for now. In the meantime...how about a portrait of upper-class ennui and a working-class maybe-fairy tale? 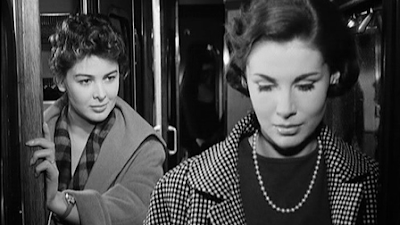 Only a few months ago did I finally introduce myself to Michelangelo Antonioni's groundbreaking 1960 film L'Avventura on DVD; in fact, the encounter compelled me to write this appreciation of long shots in movies. What I didn't mention in that post was that my overall reaction to the film was not overwhelmingly positive. I admired it, sure, and certainly concur that it is a considerable work—but the profoundly haunting experience other critics have described never quite materialized.

After this year so far of eye-opening repertory film viewing, though, I have a feeling that I may need a big-screen theatrical experience to fully appreciate Antonioni's meditation on upper-class ennui. Maybe his long shots, for one thing, simply demand a higher resolution for them to truly unnerve. (At least the smaller dimensions of my 42" LCD televisions set at home wasn't enough to dim the beauty of Antonioni's '60s muse, Monica Vitti.)

In the meantime, though...there's Le Amiche, an early work of his from 1955 that, to my mind, explores a lot of the same emotional and thematic terrain he approached in L'Avventura but in a less forbidding and more affecting manner.

Not that the film—showing at the Film Forum this week, through Thursday, in a pristine new 35mm restoration courtesy of the Bologna Cineteca—is free from Antonioni's familiar style and obsessions. In Le Amiche, one can sense some of those obsessions in rough-draft form: a fascination with human beings dwarfed by the landscape surrounding them, an interest in expressively navigating his camera through indoor and outdoor space, and a preoccupation with the spiritual and moral bankruptcy of the idle rich. But Antonioni's storytelling style is relatively more conventional than it would be in his later work.

Perhaps, though, it's that directness with which he addresses the complex emotions of his quartet of women—one of them a woman named Clelia (Eleonora Rossi Drago) who returns to Torino after many years to open a new branch of a fashion salon, and finds herself entangled in a complicated, and sometimes destructive, web of romantic relationships among a group of privileged men and women—that makes Le Amiche as moving as it is. If he steadfastly refused to psychologize his empty characters in L'Avventura, here he—taking his cues from a novel by Cesare Pavese—still allows us a somewhat sympathetic handle on his characters without ever fully explaining their behavior. Besides, it is possible the women Clelia—more ambitious than most others in the social circles she travels in Torino—deals with don't necessarily have a grasp of what animates them (other than boredom, perhaps).

Le Amiche, then, may be less alienating and thus more approachable than L'Avventura, but in its multifaceted examination of the meaning of love among the members of a privileged class, the earlier film is arguably even more powerful and thought-provoking. For Antonioni, the bereft spirituality of the idle rich is never a subject for easy one-note mockery or condescension. 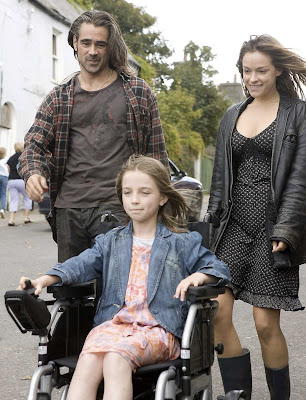 If you've seen trailers for Irish filmmaker Neil Jordan's latest film Ondine (2009), you may think you're about walk into a real-life fairy tale of a movie. But that isn't what the actual film is; it's a fairy tale, but not in the way you would think. Instead, it's a quotidian domestic drama that soon takes on fairy-tale dimensions as the mysteries surrounding its title character multiply, and as one character—Annie (Alison Barry), daughter of divorced fisherman Syracuse (Colin Farrell)—offers an intriguing fantastical explanation for the existence of the woman (Alicja Bachleda) he fishes out from the sea at the beginning. It's an explanation that Syracuse and much of the town seems to want to believe...even when the truth ends up being far less appealing.
Ondine's mix of fantasy and reality isn't completely seamless, and eventually Jordan runs out of inspiration in trying to explain away the film's many mysteries in a rather rushed ending. But as an exploration of the ways ordinary people latch onto fantasy as a way to clarify the physical and emotional realities in front of them, it's often enchanting and even inspiring. And Jordan, with the help of ace cinematographer Christopher Doyle, creates a world—a not especially glamorous one, but still one suffused with a strangely beguiling otherworldly glow—in which fantasy and reality convincingly reside.
It is a lush, transporting fable that is, in many ways, about the power of fables...and, by extension, about the power of movie fantasy in general. At its best, Ondine offers a potent, touching reminder of why one loves movies in the first place. At least, it did for me.
Posted by Kenji Fujishima at 6/21/2010 12:01:00 AM