A Video and Graphic for the Day, To Close Out the Week

EAST BRUNSWICK, N.J.—To close out this more-active-than-usual week here at My Life, at 24 Frames Per Second, I offer you all a video and and a graphic for the day.

The video above is a so-funny-it-hurts satire, via the Upright Citizens Brigade, of the ignorance and incompetence of the global-energy company BP in the ongoing oil spill in the Gulf of Mexico, one that weeks ago surpassed the 1989 Exxon Valdez disaster to become the worst in U.S. history, causing massive environmental damage and overturning untold numbers of lives. It is a terrible, outrage-inducing situation, and I hope the right people—as even our own president said on television—get their asses kicked for allowing such a thing to happen in the first place. But who says one can't have a good, cleansing laugh at the expense of the people at fault? As Sheriff Ed Tom Bell says in No Country for Old Men (2007), "I laugh myself sometimes. Not a whole lot else you can do." 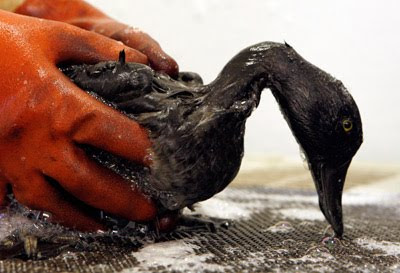 ***
On a far lighter note: Who would have thought the Internet Movie Database's list of the top 250 movies of all time, as voted by the site's users, could be turned into...a subway map? 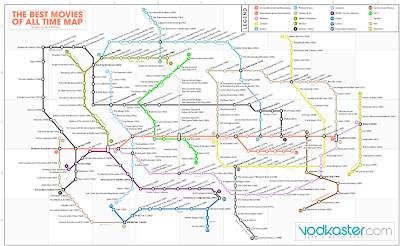 A Frenchman named David Honnorat took IMDb's Top 250 as of June 19th, 2009, and decided to configure it as a subway map with various subway lines signifying the different genres the films span.
So, according to this map, for example: In order to get from The Seven Samurai (1954) to The Departed (2006), you'd have to transfer at The Godfather: Part II (1974). What about getting from Nosferatu (Murnau's 1922 original, of course) to There Will Be Blood (2007)? Gotta transfer at King Kong (the one and only 1933 version)! (Considering the way There Will Be Blood ends, that seems oddly appropriate.) The possibilities, as you can see, are just about endless. Even better, the color-coded map is quite nice to look at.
When a good friend of mine sent me a link to this at work, I was immediately taken by it; I'm passing this one with the certainty that you all will be, as well. I tip my lost beret to you, M. Honnorat! (Here's a link, by the way, to the site from which this graphic is taken.)


***
And with that, I take leave of this blog for the weekend. It's been a pretty interesting week both in my own life and in My Life, at 24 Frames Per Second. Let's come back here on Monday and do it again.

In the meantime, have a lovely weekend!

And why don't you keep a still frame in mind while you're enjoying yourselves? As a tribute to Jia Zhang-ke, the great Chinese filmmaker who will soon awarded a Leopard of Honor at the upcoming Locarno Film Festival in Switzerland, here's a shot from my favorite film of his, Still Life  (2006): 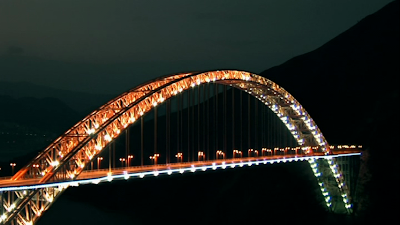